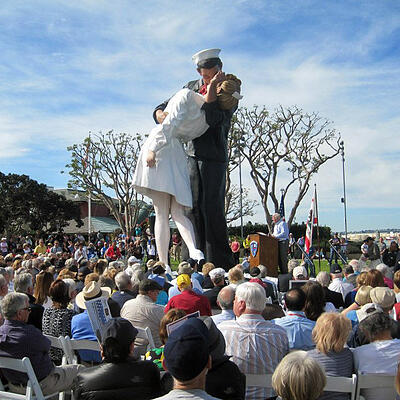 “Some famous writers, painters and musicians have done some of their best work in their later years,” says NPR correspondent Ina Jaffe, echoing a sentiment that Deupree House residents have been proving for years—older adults have so much to contribute to their local communities and even the global community.

Becoming involved in community is one of the best ways that older adults can enrich senior living, but at Deupree House, we know that this also works the opposite way. Older adults enrich community life.

Older Americans are an integral part of our communities.

And younger generations can benefit from the experience and expertise of the generations that came before them. Older adults have a wealth of skills and stories to share. There are plenty of ways that communities can come together to honor these amazing older Americans and unleash the power of age—as ERH communities did during Older Americans Month in May.

One of the ways that we’re honoring the contributions of older adults at Episcopal Retirement Homes communities is by keeping the spirit of ’45 alive.

On August 14, 1945, the whole world rejoiced at the news that the most destructive war in history had ended, and this past month some ERH communities have been celebrating the accomplishments of this “greatest generation.”

In August 2010, Congress unanimously voted in favor of establishing a national observance that would honor the legacy and accomplishments of the ordinary men and women who played such an important role in World War II and the years after the war and celebrate the “Spirit of ’45.”

Now, the “Spirit of ’45 Day” is celebrated in hundreds of communities throughout America on the second Sunday every August, aligning with the anniversary of August 14, 1945— the Greatest Day for the Greatest Generation.

As the world began to recover from the devastation of war, Life magazine published an issue with a cover that became iconic.

In the photo, a joyous sailor is kissing a nurse in New York’s Times Square as, around them, the ticker tape floats down and the city celebrates the end of the war. This image has become the symbol of the spirit of ’45—a time when history was made as a new America and a new world was born out of the end of the war.

In the years that followed victory in Europe and the Pacific, the American men and women who had struggled for so long during the war began to work toward establishing a better, brighter future for their children and grandchildren.

Every city, town, and individual has their own story of August 14, 1945. The men and women who returned home had endured the difficult times of the Great Depression, achieved victory in WWII, and then went on to rebuild the world.

Their extraordinary achievements are stories that must be told.

In fact, sharing their stories with others might be the best way for older adults to bring about change and improve life in their communities. A whole community benefits when older adults are able to share their abilities and experience with friends and neighbors.

The “Spirit of ’45 Day” has provided us an opportunity to remind our community (and our residents) of their courage, shared sacrifice, and commitment to service so that their example of national unity and community can inspire future generations of Americans, especially our nation’s youth.

If you weren’t able to participate in a “Spirit of ’45” event, there are still ways for you share your legacy.

Stories of Service connects youth volunteers with service men and women across the country to share the inspiring stories of those Americans who served our nation.

Celebrating Legacy allows members to record and share stories about their achievements, personal journeys, and family history with future generations.

By
Bryan Reynolds
Bryan Reynolds is the Vice President of Marketing and Public Relations for Episcopal Retirement Services (ERS). Bryan is responsible for developing and implementing ERS' digital marketing strategy, and overseeing the website, social media outlets, audio and video content and online advertising. After originally attending The Ohio State University, he graduated from the College-Conservatory of Music at the University of Cincinnati, where he earned a Bachelor of fine arts focused on electronic media. Bryan loves to share his passion for technology by assisting older adults with their computer and mobile devices. He has taught several classes within ERS communities as well as at the Osher Lifelong Learning Institute run by the University of Cincinnati. He also participates on the Technology Team at ERS to help provide direction. Bryan and his wife Krista currently reside in Lebanon, Ohio with their 5 children.
fighting ageism total wellness Building Community community outreach Senior Life senior living