Have you ever sat and watched in envy while your friends cut a rug out on the dance floor? 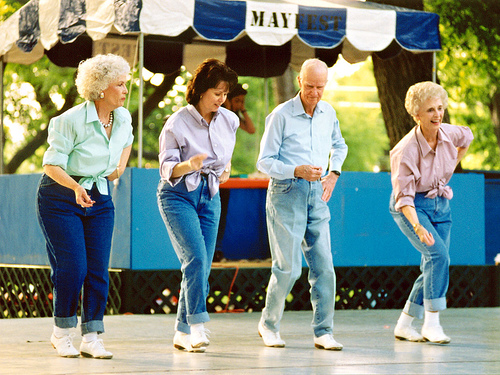 It’s not too late for you to learn how to groove. Plenty of older adults don’t begin taking lessons until after retirement, and a beginner’s class is a great way to ease back into exercise if it’s been a while since you last hit the gym.

Don’t worry that you won’t fit into classes. Plenty of retirement communities, senior centers, and dance studios have classes that cater to mature dancers.

“I thought I knew how to dance until I took classes,” says 73-year-old philanthropist Hillie Mahoney. Her father first led her around the dance floor in a waltz when she was just 14, and she’s been dancing with friends for years. But now that she’s learning how to dance competitively, she’s finding that “it’s more than dragging the feet around. There’s a coordination between the brain and the feet.”

So put on your dancing shoes because dancing isn’t just good for the body—it’s a great way to promote brain fitness, too.

A 2007 study presented to the American Heart Association has shown that dancing may be one of the best forms of exercise for older adults.

In the test, a group of 110 adults with chronic heart conditions were shown to have improved their oxygen consumption by 18 percent and their cardiovascular fitness by 19 percent after 8 weeks of waltzing. Their compatriots who undertook other aerobic exercise—walking on a treadmill or riding a bicycle—saw similar improvement in their heart health (a 16 percent increase in oxygen consumption and 18 percent lift in their cardiovascular fitness), but the study showed that dancing had benefits that lasted long after the test was complete.

Of the two groups of exercisers, the dancers reported a significant increase in their mental wellness as well as their physical fitness—an improvement not reported by the group who participated in more traditional exercise.

The study also found that participants were more likely to continue exercising after the test if they had become involved in dance during the study.

According to results first published in The New England Journal of Medicine, older adults who dance aren’t just improving their physical fitness; they’re decreasing their chances of developing dementia, too.

Of the 9 different types of exercise that were studied by Joe Verghese, professor of Neuorology at Albert Einstein College of Medicine, and his cohort, only dance had a measurable effect on the brain fitness of participants. Verghese couldn’t say for sure why dance had such a significant impact, but the team of researchers has hypothesized the mental effort of learning new moves fully engages the brain which instigates the creation of new neural connections. Additionally, the social aspect of dance helps promote mental wellbeing which helps combat stress.

Once you turn 65, your risk of suffering a fall dramatically increases.  Existing physical limitations and health conditions or other external hazards combine to make falls the number 1 cause of injury related deaths among older Americans.

According to the Center for Disease Control and Prevention, one out of every three Americans age 65 or older suffers a fall every year. In a 3 month period in 2006, the CDC found that well over a million older adults suffered a fall that caused a debilitating injury that required medical attention and a restriction of regular physical activities.

Weak muscles, trouble with balance or posture, and difficulty walking can all increase your chances of suffering a fall, but regular aerobic exercise, like dancing, can strengthen your bones and tone muscle to improve your balance and cut back on your risk of suffering a fall.

By
Bryan Reynolds
Bryan Reynolds is the Vice President of Marketing and Public Relations for Episcopal Retirement Services (ERS). Bryan is responsible for developing and implementing ERS' digital marketing strategy, and overseeing the website, social media outlets, audio and video content and online advertising. After originally attending The Ohio State University, he graduated from the College-Conservatory of Music at the University of Cincinnati, where he earned a Bachelor of fine arts focused on electronic media. Bryan loves to share his passion for technology by assisting older adults with their computer and mobile devices. He has taught several classes within ERS communities as well as at the Osher Lifelong Learning Institute run by the University of Cincinnati. He also participates on the Technology Team at ERS to help provide direction. Bryan and his wife Krista currently reside in Lebanon, Ohio with their 5 children.
living well senior fitness activities for seniors total wellness exercise and activity senior living health tips for seniors brain fitness