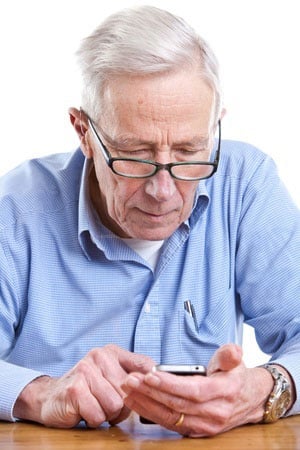 If you’ve ever been stuck in a doctor’s waiting room, or faced a big bill for an easy 10-minute consult, you’ll probably be interested in the latest smartphone application shaking up the American healthcare system. It’s called HealthTap, and the startup that developed it hopes it will help stimulate innovation in the healthcare market.

Are house calls coming back?

For a $99 monthly fee, plus an additional $10 for each additional family member using the account, HealthTap connects users in real-time to physicians for consults and advice.

Via the service’s app or desktop platforms, users can ask questions of doctors by text or voice message or talk with a physician face-to-face over the app’s high-definition Virtual Consult video chat. Users can even send photos and test results— radiology images or lab reports— to the physician with whom they speak.

The consulting HealthTap doctor can interpret available test results, call in prescriptions and refer the user to a primary care physician or specialist for follow-up.

The service’s founder, Ronald Gutman, states that HealthTap’s advantage is in its ability to help patients with relatively minor illnesses save time and avoid aggravating back-and-forth hassles with insurance companies— for about the same cost monthly as a trip to urgent care. It can also help patients get much-needed peace of mind after hours, when they cannot reach their normal doctors by phone, and thus avoid unnecessary and expensive trips to the emergency room.

Instead of users searching the Internet and attempting an inexpert self-diagnosis, HealthTap users can receive real medical advice from an experienced, qualified professional. Consulting doctors can even set an appointment to see the patient in person, if both parties wish.

Self-diagnosing by Internet search is a trend which increasingly alarms medical practitioners (who worry about wasteful expenditures on unnecessary rule-out tests that divert critical care resources away from patients who need them most). And some studies do indicate that having more information readily available to patients up front in the digital arena does help to make people engage more with healthcare services and may have the overall effect of incentivizing healthier behaviors on an aggregated scale.

The one thing HealthTap cannot do, however, is help you to be seen faster by a provider in your area. It cannot make urgent referrals or give the user any advanced placement in the emergency room queue.

As Gutman intimated, HealthTap "is a supplement to your insurance, but it's not a substitute. We are not there to replace emergency services, we are there to answer questions."

According to one HealthTap provider, Dr. Geoffrey Rutledge, a primary care and emergency physician who is also a co-founder of the startup service, the benefits to users are clear.

"It doesn't matter how you pay for your healthcare, you want your care to be wise," he said. "It's a wonderful thing to get the guidance from your doctor right away, so you don't fail to get the care that's needed."

HealthTap boasts of a physician database of over 62,000 providers covering 130 specialties. Rutledge said that the service is also attractive for physicians who are weary of the bureaucracy and pitfalls of the current health system.

"Doctors see this as an empowering tool," he asserted. "It takes away the administrative hassle and overhead and lets them just be a doctor."

It is also nice for a provider to answer one question for many people at once and be able to move on, instead of answering and re-answering the same question hundreds of times.

"As a doctor, you only see patients one-on-one," Rutledge said. "When I'm answering a question on HealthTap, I can reach millions of people with a single answer or health tip."

HealthTap can help you to follow through and to be more accountable for your treatment regimen.

The app also allows advising providers to make task checklists for users, to follow up on advice they have given. Users can check off tasks right on their smartphone or from their home computer, and track their progress.

Moreover, the app lets users search through other users' questions and the answers that have been provided in the past, giving them instant access to a wealth of expert knowledge.

HealthTap is not a replacement for your doctor or specialist, but it is an interesting concept and a service that has the potential to become a component in the overall continuum of your care. It could save you time, and in the future may help to reduce long lines and unnecessary waste, by giving people peace of mind before they go running off to the emergency room for non-emergent problems.

By
Bryan Reynolds
Bryan Reynolds is the Vice President of Marketing and Public Relations for Episcopal Retirement Services (ERS). Bryan is responsible for developing and implementing ERS' digital marketing strategy, and overseeing the website, social media outlets, audio and video content and online advertising. After originally attending The Ohio State University, he graduated from the College-Conservatory of Music at the University of Cincinnati, where he earned a Bachelor of fine arts focused on electronic media. Bryan loves to share his passion for technology by assisting older adults with their computer and mobile devices. He has taught several classes within ERS communities as well as at the Osher Lifelong Learning Institute run by the University of Cincinnati. He also participates on the Technology Team at ERS to help provide direction. Bryan and his wife Krista currently reside in Lebanon, Ohio with their 5 children.
Technology senior health health tips for seniors smartphone apps