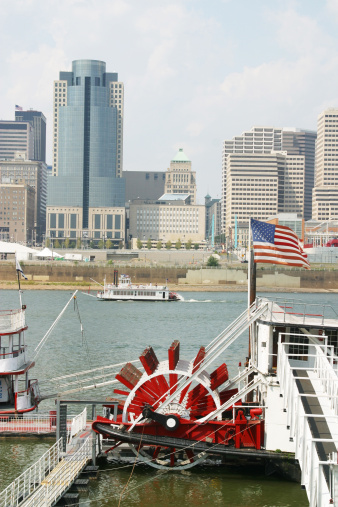 One of the best aspects of senior living in Cincinnati is the opportunity to engage in so many culturally-enriching activities.

Given that World Architecture Day is October 6, and the Queen City has long been known for its gorgeous skyline and important contributions to the development of architecture and engineering, , we thought it might be nice to take you a virtual tour of a few of Cincinnati's most aesthetically intriguing and architecturally important buildings.

In 1933, Cincinnati's long dreamt-of, unified railway terminal opened on the West Side. An Art Deco masterpiece, Union Terminal was initially called a "Temple to Transportation" by many reporters of the day.

Designed to accommodate 216 trains every day from all the major passenger and freight lines serving the city, it featured a high, arching, half-dome facade (the second-largest in the world after the Sydney Opera House), rows of interior shops, luxurious waiting areas and beautiful, socially-progressive mosaic murals depicting Cincinnati's booming industrial arts by German-American artist Winold Reiss (some are still present in the rotunda while some were later transferred to the concourses of Cincinnati/Northern Kentucky International Airport.

In the 70s, passenger train travel declined, and Union Terminal was closed to regular service.

Following an abortive attempt to redevelop the building as a mall in the 1980s, a movement to save the iconic building resulted in a renaissance, of sorts. The Cincinnati Natural History Museum and the Cincinnati Historical Society moves into the building in the early 90s and were later joined by the Cincinnati Children's Museum. Today, the museum complex welcomes hundreds of visitors daily— including, once again, rail travelers.

The Carew Tower and attached Hilton Cincinnati Netherland Plaza— located at 441 Vine Street— are another Art Deco tour-de-force in the heart of downtown. Construction on the Carew Tower had begun in 1927 as a proof-of-concept model for New York's Empire State Building, on which construction was begun two years later.

When the Carew opened in 1930, it was the tallest building in Cincinnati and remained so until the Great American Tower at Queen City Square opened in 2010. From its observation deck, visitors can see three states— Ohio, Kentucky and Indiana— on a clear day. Its gorgeous interior spaces are marked by Art Deco styling and luxurious flourishes like the Hilton’s Hall of Mirrors banquet room inspired by the Hall of Mirrors in Louis XIV's Palace of Versailles.

Widely acclaimed for superior acoustics and a palatial interior— including glittering chandeliers and a visually-arresting grand staircase— Music Hall has hosted Cincinnati's long-running May Festival, as well as famous artists like Frank Sinatra, Miles Davis, and Prince. It is the third-largest permanent concert hall in the United States, surpassed only by New York's Metropolitan Opera House and DAR Constitution Hall in Washington, DC.

In recent years, the building has served as the breathtaking backdrop for the Cincinnati Symphony Orchestra and Cincinnati Ballet's jointly-presented and wildly successful summer Lumenocity concerts.

Built over a pauper's cemetery, Music Hall is rumored to be one of the most haunted locations in the Queen City. Several area ghost tours make stops at the building. So, if you go, it might be wise to take a flashlight and watch over your shoulder. You never know who— or what— you might see there.

The Ascent at Roebling's Bridge

A recent addition to the Greater Cincinnati architectural landscape is the Ascent at Roebling's Bridge, on the Covington riverfront, right next to the bridge's Kentucky terminus. The 22-story, spiraling, luxury condominium building was designed by internationally-acclaimed architect Daniel Libeskind, who also designed the new Freedom Tower being completed on the grounds of the World Trade Center in New York.

The building represents an increasing trend toward aesthetic design in residential architecture and is considered by many in the architecture community— Neal Schwartz aside— to be of critical importance. Love it or hate it, it is an intriguing postmodern addition to the local cityscape and thus, worth a visit.

Although visitors to heavily Catholic Cincinnati are often struck by the beauty of cathedrals in downtown and on neighboring Mt. Adams, many overlook the beautiful Isaac M. Wise Temple— home of one of the oldest congregations in Cincinnati's thriving Jewish community.

Located at 7th and Plum, near City Hall and across the street from St. Peter in Chains Cathedral, the Isaac M. Wise Temple is named for the founder of American Reform Judaism, which began in the Queen City. The temple opened in 1866 and is among the oldest synagogues in the United States.

In 1972, the temple building was placed on the National Register of Historic Places.

Less conspicuous, but of crucial importance to the development of architecture, is the 16-story Ingalls Building at 4th and Vine. Until 1903, when the building opened as the world's tallest reinforced concrete building— making it the world's first true "skyscraper"— the tallest inhabitable buildings did not exceed six stories.

When the 210-foot building did open, many people were afraid to set foot in it. In fact, many engineers were convinced that the building would collapse under its own weight. One skeptical newspaper reporter even waited up all night for the calamity he was sure would occur. It never did. And today you can still visit this grand old dame of the Central Business District.

There are many other architectural and design treasures in Cincinnati awaiting your discovery.

Senior living doesn't have to be boring. An architectural tour— organized or self-guided— of the Queen City is a great way to get out and experience the beauty of life here. Living well doesn't mean sitting at home and twiddling your thumbs. Get out and explore today!

By
Bryan Reynolds
Bryan Reynolds is the Vice President of Marketing and Public Relations for Episcopal Retirement Services (ERS). Bryan is responsible for developing and implementing ERS' digital marketing strategy, and overseeing the website, social media outlets, audio and video content and online advertising. After originally attending The Ohio State University, he graduated from the College-Conservatory of Music at the University of Cincinnati, where he earned a Bachelor of fine arts focused on electronic media. Bryan loves to share his passion for technology by assisting older adults with their computer and mobile devices. He has taught several classes within ERS communities as well as at the Osher Lifelong Learning Institute run by the University of Cincinnati. He also participates on the Technology Team at ERS to help provide direction. Bryan and his wife Krista currently reside in Lebanon, Ohio with their 5 children.
living well senior living Cincinnati

Senior Health Supplements: Should You Be Taking Vitamins?