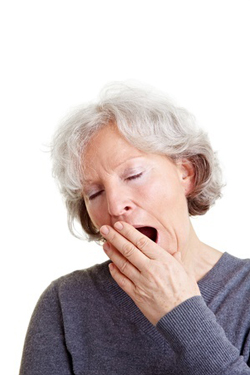 For active seniors who spend their golden years travelling, jet lag can be a nagging problem. Even younger adults often have difficulty adjusting their internal body clock to new time zones, but it can be particularly troublesome for older people — especially for the many seniors who deal with chronic insomnia. Sometimes, by the time a person adjusts to the time zone at his or her travel destination, the vacation is nearing its end, making it hard to enjoy your experiences.

But there are strategies for minimizing the effects of jet lag. And now, two researchers at the University of Michigan think they have found a way to make it easier for people to implement them.

Using your smartphone to optimize your biorhythm.

In a new study published in the journal Public Library of Science Computational Biology, UM mathematics professor Danny Forger and his colleagues suggest that jet lag is “fundamentally a math problem”-- a problem they believed they could solve through the use of mathematical modeling which would allow them to develop simple and effective countermeasures to reduce jet lag.

Using sophisticated analysis, the researchers showed that it is possible to predict the times at which countermeasures — including increased pre-waking light exposure, naps, or stimulants like caffeine — are most effective in helping the body’s internal clock (its Circadian rhythm) to reset, and therefore counteracting the effects of jetlag. They also noted that using a countermeasure at the wrong time has the opposite effect — prolonging the effects of jet lag.

The difficulty, the researchers found, lies in the average person’s ability to figure out when and what he or she should do. Their proposed solution? A smartphone application with a user-friendly interface that tracks the time that one’s body thinks it is, based on a few simple initial inputs and self-reported light exposures.

This application, called Entrain (from the scientific term “entrainment,” which means to reset one’s Circadian rhythm), then makes recommendations to the user for times when he or she should use bright light or darkness exposures to rapidly adjust.

You may need to bring some equipment with you. But that may be well-worth the expense.

In order to meet Entrain’s recommendations, you may need to be able to simulate bright daylight or darkness out of phase with what’s going on outside your hotel room. To that end, the researchers recommend purchasing a 10,000-lux lamp (which gives the light equivalency of noontime sun), and a pair of orange-tinted glasses (which trick your eyes’ receptors into signaling twilight to your brain). You might also need a plug-in timer and, as any international traveler can attest to, a plug adaptor so that you can time your day-lamp to come on automatically while you are sleeping, at the predicted effective time.

And if your travel schedule will not allow you to follow the app’s recommendation at a certain point (obviously, you can’t run a day lamp on a plane or waiting in an airport), no worries. Since the app relies on the user to self-report light exposures and symptoms of jet lag, it can readjust and make new recommendations.

Basically, the underlying idea is to avoid anything that impacts too heavily on your travel schedule. That way, you can spend more time kicking back and enjoying your trip.

For now, Entrain is only available for iPhone, but Android users can take heart.

The development team responsible for the application has plans to soon release a version for Android. For tech-savvy, active seniors, the application promises to be an effective method for increasing the time you spend enjoying your trips, helping you to get the most out of your golden years.

By
Bryan Reynolds
Bryan Reynolds is the Vice President of Marketing and Public Relations for Episcopal Retirement Services (ERS). Bryan is responsible for developing and implementing ERS' digital marketing strategy, and overseeing the website, social media outlets, audio and video content and online advertising. After originally attending The Ohio State University, he graduated from the College-Conservatory of Music at the University of Cincinnati, where he earned a Bachelor of fine arts focused on electronic media. Bryan loves to share his passion for technology by assisting older adults with their computer and mobile devices. He has taught several classes within ERS communities as well as at the Osher Lifelong Learning Institute run by the University of Cincinnati. He also participates on the Technology Team at ERS to help provide direction. Bryan and his wife Krista currently reside in Lebanon, Ohio with their 5 children.
independent living for seniors living well activities for seniors Senior Life senior health senior living health tips for seniors