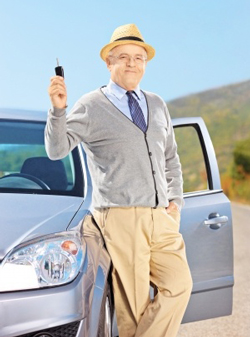 Last year, when sales of new vehicles made their best showing since the 2008 recession, major car manufacturers and economists wondered just what was going so right.

Many figured that an improving job market was leading to a stronger market for new vehicles, so Detroit’s Big Three and other producers were quick to market family-friendly features and options. They thought that budget-conscious thirtysomethings impacted by the recession were beginning to feel less pinched. As it turns out, though, they were wrong.

The pacesetters were people over the age of 50.

As Boomers are reaching retirement age, they are beginning to collect their pensions, Social Security and 401(k) disbursements. But seniors are more active then ever before; for many, retirement age doesn’t necessarily mean retirement. Plenty of people are foregoing retirement and staying engaged in the workforce, while drawing from their retirement funds.

That leaves a lot of extra income for vacations and luxuries like a new car.

Senior lifestyles are different these days — this ain’t your father’s Oldsmobile.

Analysts have been particularly amazed that aging Boomers are not buying the vehicles traditionally associated with retired persons, like Buicks and Cadillacs. They’re buying coupes, small SUVs and even light trucks — vehicles Detroit expected the younger generations to be more keenly interested in. Some of the more popular “Boomermobiles” purchased in 2013 were, according to the AARP:

More surprising for car manufacturers: new vehicle sales among younger generations — those who are still working and, per conventional wisdom, more apt to be able to afford a new vehicle — continue to fall, according to research published by the University of Michigan last year.

Auto manufacturers responding to the market by designing and marketing with seniors in mind.

Features like foot-activated hatches, rear-facing camera displays and proximity detectors are particularly attractive to Boomers— especially as many are increasingly experiencing age-related mobility limitations. It’s simply harder for some to turn completely around in their seats to look while driving in reverse or to hold packages in one hand while fumbling with keys in the other. Vehicles with extra cargo space and easier access are always hot sellers for the older crowd.

Toyota, for example, is now actively marketing its Venza model to active Boomers, by touting its sporty, hip feel combined with its relative ease to climb in and out of, relative to a high-clearance SUV. Even their ad strategy has changed, according to Toyota’s national ad strategist, Bob Zeinstra, in an interview with last August in Bloomberg.

One of Zeinstra’s strategies has been to run ads that “made fun of the millennials” and showed seniors enjoying outdoor sports.

“We got a lot of great reaction from those ads,” he told Bloomberg. “Boomers are looking for vehicles that help them stay active and young because that’s the image they want to have of themselves.”

AARP’s Auto Buying Program provides perspective purchasers with complimentary TrueCar price reports, which show the average price paid for a vehicle and ostensibly allow the buyer to determine if he or she is getting a good value relative to peer buyers.

The Auto Buying Program allows users to conduct their research by comparing features, displaying vehicle reviews and providing vehicle pictures. AARP also maintains a network of prescreened dealers who pledge to work with seniors and provide them hassle-free negotiations.

Seniors are living more active lifestyles than ever before, and their purchases are showing it. Naturally, if you are over the age of 50 and in the market for a new vehicle, you’ll want to do your research up front and have a financing plan before walking in to the dealer. It’s easy to be wowed by high-tech features and luxuries.

You’ll want to make sure that the price you pay is a good value, so do your homework. Then get out on the road and enjoy.

By
Bryan Reynolds
Bryan Reynolds is the Vice President of Marketing and Public Relations for Episcopal Retirement Services (ERS). Bryan is responsible for developing and implementing ERS' digital marketing strategy, and overseeing the website, social media outlets, audio and video content and online advertising. After originally attending The Ohio State University, he graduated from the College-Conservatory of Music at the University of Cincinnati, where he earned a Bachelor of fine arts focused on electronic media. Bryan loves to share his passion for technology by assisting older adults with their computer and mobile devices. He has taught several classes within ERS communities as well as at the Osher Lifelong Learning Institute run by the University of Cincinnati. He also participates on the Technology Team at ERS to help provide direction. Bryan and his wife Krista currently reside in Lebanon, Ohio with their 5 children.
activities for seniors senior lifestyles Senior Life senior living

5 Best Podcasts for the Curious Senior