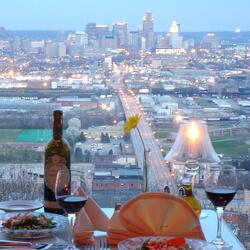 As inconceivable as it may be to most of us, there are some people who dread the idea of life after retirement. “What will I do with all that extra time on my hands,” you hear them say.

The mind reels with all the many ways to answer that question.

The first answer, if you live in a city like Cincinnati would be to go back and visit some of your favorite restaurants from the past. Or try a few new ones, for that matter. USA Today recently included Cincinnati on its list of “Six Small Cities With Great Food Scenes.”

So if the rest of the country is making its way to Greater Cincinnati restaurants, it’s probably time that those of us who live here devote a little of our retirement time to re-exploring the local dining scene.

In case you need a nudge, here are a few to get you started.

Senate Pub. Located in the now-bustling Vine Street corridor in the re-invented Over the Rhine, Senate is, underneath it all, a hot dog restaurant. But before you turn up your nose, understand that this is a place known for its ability to turn a “common” food into a culinary treat. For condiments, for instance, don’t think mustard and relish. Think instead of things like mushroom pico de gallo, avocado, caramelized onions, kimchi and the like. Senate is not a one-trick pony. It’s an adventure.

Boca. Located in the space you may remember as The Maisonette, Boca has proven a worthy successor. Like that earlier restaurant, Boca’s meals are experiences to be savored slowly. There’s no rush as you make your want through multi-course meals. They have an exquisite and extensive wine list, as well. Give their expert staff an opportunity to suggest a selection and you’re likely to end up with some brilliant pairings.

Primavista. This is one of those restaurants that has been around for ages. But unlike so many of its competitors, Primavista’s extraordinary quality has never slipped. And now, as Price Hill’s Incline District is starting to blossom, Primavista is looking to become the culinary centerpiece of one of the city’s hippest new/old neighborhoods. With an Italian-leaning menu filled with genuine preparations, Primavista is as much a gem as it was three decades ago. And it still has, by far, the best city view of any restaurant in the area.

Eli’s Barbeque. No, it’s not fancy. In fact, Eli’s is tucked away in an area where you’d never expect to find a restaurant that The Cincinnati Enquirer named as one of the area’s 10 Best in 2013. Located in a small wood-framed building in what we used to call the East End, Eli’s has a menu filled with some of the most scrumptious traditional barbeque the area has ever tasted. If you come in the warm weather, be sure to take advantage of the outdoor seating, which regularly spills over into the small park located behind the restaurant. The generous sense of community is inescapable.

Vitor's Bistro. The west side of Cincinnati has never been known for its fine dining. Then, Vitor’s showed up. Located in a mid-19th Century building in the historic Westwood/Cheviot business district, Vitor’s is one of those rare fine dining establishments that serves breakfast, lunch and dinner. Simple, quiet and blessedly short of pretense, Vitor’s is a place that most A-list diners in the area know, but are loathe to tell others about lest it grow too popular.

A Tavola Bar + Trattoria. A Tavola is as unlikely a dining establishment as its neighbor, Senate, which is just a couple of doors away. Just as Senate elevates hot dogs to a whole new level, so does A Tavola with its pizzas. These aren’t pizzas that you serve to a roomful of ravenous teen-agers. These are pizzas for grown-ups, booked in a genuine wood-fired Neapolitan pizza oven and covered with generous helpings of gourmet ingredients, from fig and prosciutto to artichoke and sage.

Jean-Robert's Table. If you’re going to visit one restaurant in Cincinnati, it ought to be this one. Jean-Robert is the man who singlehandedly reinvigorated fine dining in the area in the post-Maisonette era. When he worked with a business partner, he oversaw a small collection of fine establishments. But now, he’s on his own, with his own kitchen, his own staff and his own extraordinary culinary aesthetic. Formal, but not so formal that you feel uncomfortable, Jean-Robert’s is fine dining the way it was meant to be– about the food, not the attitude.