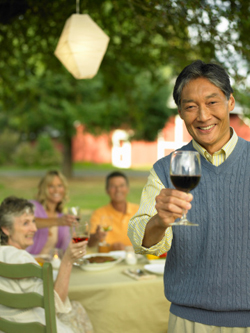 Long before California became known as the center of American winemaking, that distinction belonged to none other than Cincinnati.

That’s right. In the early 1800s, banker and real estate speculator Nicholas Longworth began his venture into viticulture by planting Catawba grapes along the hillsides of what we now know as Mt. Adams. In time, his vineyards would cover many of the hills overlooking the Ohio River, all the way out to what is now Alms Park in Columbia-Tusculum.

Longworth became a millionaire many times over. And his wines were enormously popular throughout the U.S. and Europe. So powerful was his influence on winemaking that he was regularly called the Father of American Grape Culture.

That might be more history than you bargained for. But when we look at Greater Cincinnati’s wine culture, it’s a good reminder that your search shouldn’t be limited to good wine stores, of which there are many. It’s also worth taking a look at the many vineyards that have sprung up in the area, especially on the Kentucky side of the Ohio River.

We’re huge fans of wine tastings. Not only are they informative and a reasonably priced way to taste a few wines before we buy, but they are also wonderfully friendly affairs and a great place to meet people with common interests.

It’s probably no surprise, but as a rule of thumb, the best place to look for enlightening wine tastings is a top-notch wine retailer.

Among our favorites are:

The Wine Merchant, 3972 Edwards Rd in Hyde Park. (513-731-1515). You’ll not only find regularly scheduled wine tastings here, but it’s rare that you’ll walk into the shop and there won’t be some informal tasting going on. Superb advice, fine offerings and you needn’t spend a fortune to find a very good wine.

O’Bryan’s Tasting Room, 8972 Columbia Road in Loveland. (513-683-2082). There are tastings here at least three days a week. And, as with other fine merchants, there always seems to be a bottle open to taste. But for the best experience, look for the scheduled tastings. There is more information and more intriguing people to meet.

Water Tower Fine Wines, 6136 Campus Lane, Mt. Washington. (513-231-9463). Located in a charming wood frame home across the street from Mt. Washington’s hill-topping water tower, Water Tower has themed Friday evening tastings – Spanish and Portuguese reds, anyone? – and a smattering of other tastings dotting the rest of the week. A charming venue that occasionally hosts fine dining experiences, as well.

City Cellars, 908 Race St., downtown. (513-621-9463). This small place, hidden away in a small storefront on Race Street in downtown Cincinnati, hosts after-work tastings every Tuesday. They’re not gigantic events. But they are congenial and regularly offer four wines, a little cheese and occasionally some live music tossed in for good measure.

Cork ‘N Bottle, 501 Crescent Ave., Covington. (859-261-8333). You’ve seen Cork ‘N Bottle a million times. Take the first exit south of the Ohio River from I-71/75 and there it is. Because of Kentucky’s more liberal laws governing tastings, Cork ‘N Bottle can offer free wine tastings. And they do it with great regularity, including Fridays from 4 p.m. to 8 p.m. and Saturdays, from 1 p.m. to 5 p.m. We haven’t counted the stock, but the store claims to have the most extensive wine selection in the region.

There are many, many more, of course. 20 Brix in Milford, for instance, offers remarkably good wine tastings paired with dinners. Fabulous. But the wine vendors above are some of our favorites and good places to get started.

But while you’re looking to sample wines and meet people, don’t forget the local vineyards. Again, there are many of them in the regions. But among our personal favorites is:

There are others nearby, as well, including the Atwood Hill Winery & Vineyard, Baker-Bird Winery, Camp Springs Vineyard, and Seven Wells Winery.

Ready to get started? This is, as we noted, just the tip of the iceberg when it comes to wine tastings and wine culture events. So when you attend one of these events – and we trust you will – spend plenty of time listening to what others are talking about. You’ll hear about dozens of other fascinating events because, as we noted at the beginning of this, wine is more than a beverage, it’s the beginning of a social excursion.

By
Bryan Reynolds
Bryan Reynolds is the Vice President of Marketing and Public Relations for Episcopal Retirement Services (ERS). Bryan is responsible for developing and implementing ERS' digital marketing strategy, and overseeing the website, social media outlets, audio and video content and online advertising. After originally attending The Ohio State University, he graduated from the College-Conservatory of Music at the University of Cincinnati, where he earned a Bachelor of fine arts focused on electronic media. Bryan loves to share his passion for technology by assisting older adults with their computer and mobile devices. He has taught several classes within ERS communities as well as at the Osher Lifelong Learning Institute run by the University of Cincinnati. He also participates on the Technology Team at ERS to help provide direction. Bryan and his wife Krista currently reside in Lebanon, Ohio with their 5 children.
activities for seniors life after retirement social engagement Senior Life senior living Cincinnati

Are Cincinnati Seniors Getting the Best Healthcare?