Staying Happy and Together after Retirement

Staying Happy and Together after Retirement 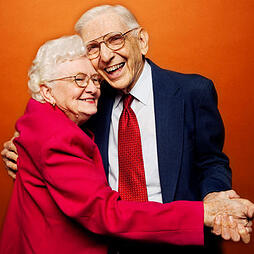 We’ve all heard the jokes. The key to a happy marriage is to never retire. Or to take separate vacations. The variations are endless, but the point is there–spending too much time together is what creates stress in a relationship.

And there may be a bit of truth tucked away in the old joke.

It’s not that you should spend more time apart, though. Rather, it’s that when you or your spouse retires, your life changes.

Retirement is a game-changer.

It can be a wonderful change. But for those who are unprepared, the results can be disastrous.

According to a poll conducted by the American Academy of Matrimonial Lawyers, the greatest increases in the number of divorces that they are seeing comes from people older than 50.

They even have a name for it: “Gray Divorce.”

It’s a clever name. But gray divorce is not a passing phenomenon. For several years, we’ve read the heartening figures that indicate the divorce rate has dropped significantly in recent years. But apparently, those figures are dominated by younger married couples.

According to the National Center for Family & Marriage Research at Bowling Green State University in Ohio, between 1990 and 2010, the divorce rate doubled among adults ages 50 and older. Even more alarming, the rate of divorce was 250 percent higher for those in remarriages versus first marriages.

So how can you and your spouse avoid becoming statistics?

It’s not a mystery. In fact, it’s something you’ve almost certainly heard many times before: communicate with one another.

Life before retirement is complicated enough. But despite what you might think, it can be even more complicated after retirement.

After retirement, your daily lives change, and it is very likely that the two of you may have very different ideas of how you’re going to spend those days. It’s important to talk about what you are expecting of from another. Not just on the usual financial issues, but on a broad range of topics from social activities to chores, from churchgoing to travel.

Like finances, these “nitty-gritty” aspects of daily life can become sources of irritation and conflict.

It’s important to remain involved with the world outside your door.

As we get older, that may become a more difficult task. Sometimes, you may just feel less of an urge to involve yourself in frenetic social activities—and that’s fine. Just don’t close yourself off from old friends or making new ones. Don’t reject new experiences.

What are those things that you always wanted to do but never had time for?

People often think of life after retirement being filled with quiet reflection and sedate activities like painting, playing cards, and knitting Afghans. And it very well may be, but don’t limit yourself to only those activities when senior life in 2014 has greater potential now than ever before.

Have you always dreamed of hiking through the vineyards of Italy? Now is the time to do it. Or how about improving your game of ping pong? Taking a digital photography class? Putting your memories on paper – or a computer screen – the way your kids have been asking you to do?

Keep in mind that you don’t have to share all of your hobbies and activities with your spouse. You’ve pursued your own individual interests all throughout your marriage, and there’s no reason that should stop now. In fact, it will give you more to share in those quiet, sedate moments later on.

The point is to involve yourself in living life.

By
Bryan Reynolds
Bryan Reynolds is the Vice President of Marketing and Public Relations for Episcopal Retirement Services (ERS). Bryan is responsible for developing and implementing ERS' digital marketing strategy, and overseeing the website, social media outlets, audio and video content and online advertising. After originally attending The Ohio State University, he graduated from the College-Conservatory of Music at the University of Cincinnati, where he earned a Bachelor of fine arts focused on electronic media. Bryan loves to share his passion for technology by assisting older adults with their computer and mobile devices. He has taught several classes within ERS communities as well as at the Osher Lifelong Learning Institute run by the University of Cincinnati. He also participates on the Technology Team at ERS to help provide direction. Bryan and his wife Krista currently reside in Lebanon, Ohio with their 5 children.
living well life after retirement

Get the Facts About How New Legislation Affects Senior Healthcare