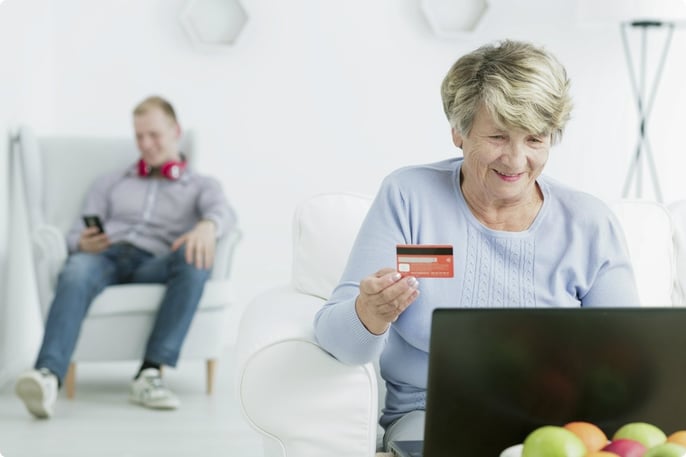 The internet and social media have many benefits, including convenient banking and the ability to buy everything from groceries to hardware online. But it’s critical to be very vigilant when opening emails and doing something as seemingly innocent as clicking on an internet link, cautions Bryan Reynolds of Episcopal Retirement Services.

He and others who work to protect their organizations from cyber crime offer many tips for how everyone, including older adults, can protect themselves from this increasing crime.

We have many safety tips in here, so read on.

Be suspicious of emails and social-media messages

Reynolds, who is the ERS vice president of marketing and public relations – and also its security officer – emphasized he’s a big proponent of the benefits of being online, for older adults and others who want to buy things, make banking transactions and socialize with friends.

“But it does come with some caution, and some good tips to be aware of,” he recently told a group at ERS’ continuing care retirement community, Deupree House.

The Federal Bureau of Investigation recently announced that in 2021, amid the COVID-19 worldwide pandemic, cyber crime cost people and corporations in the United States more than $6.9 billion.

That amount of reported losses was about a 64 percent increase over the $4.2 billion a year earlier, the bureau said in its latest Internet Crime Report.

How they steal from us

Many of the cyber criminals are in distant countries, and don’t have a strong grasp of English, which can make it a bit easier to identify some of their criminal attempts, because they use bad grammar or spelling, Reynolds said. Other times, they make such errors in attempts to get through our email spam filters. Other messages are more difficult to spot because they don’t have such errors and seem to be legitimate.

“The grand majority are these confidence crimes, the con- men and women of online," Reynolds said.

Other thefts happen through data breaches – where people’s personal information, such as credit-card information and Social Security numbers are stolen online.

One way criminals try to get money from us is by pretending to be a friend or relative of ours and asking us to send money or gift cards to help them out of a situation. In some recent cases, people have been urged to send money to get a grandson out of jail in Mexico. Sometimes they pretend to be a CEO or other leader of an employee’s company, asking them to send money or information. Sometimes the criminals pretend to be the Internal Revenue Service or other government agency, or your bank or credit-card company. In some recent situations, people have posed as Greater Cincinnati clergy who actually were ill, asking for financial help. Reynolds said he himself was approached online by someone pretending to be a relative of his who had died years earlier.

Here are ways to deal with this kind of scam: First, when you receive an email or text from someone saying they need help urgently, step back and think: If it is so urgent, wouldn’t they call instead? To ease your mind that this isn’t a real situation, it’s best to phone the person who supposedly sent the text and check on them. Or call your bank, the credit-card company or the government agency. But don’t use a phone number or click a link that may have been texted or emailed to you. That may be part of the scam. Instead, look up the phone number of the person, government agency or company yourself, and dial that number.

Also, keep in mind, if a government agency or bank has an important message for you, they’re unlikely to send it by email or text, unless you have made such arrangements with your bank to send you text alerts. Also remember, most government agencies, including the IRS. do not send such electronic messages. They’ll contact you in other ways.

One way we can avoid having somebody pose as us in such messages is to not share too much information on social media. If you announce, for example, that you’re going on vacation in Costa Rica, some criminal may send messages purporting to be from you, saying you’re stuck in Costa Rica and need help.

Another type of scam

Some cyber criminals have become very sophisticated with a similar scheme: They send a text message or email that asks us to click on a link, or open or download an attachment. This practice is called “phishing,” and it is used to extract financial data and other information from your computer to steal your identity.

Be very wary of clicking, opening or downloading anything, unless you know the person who sent it and verify with them in person or over the phone that it’s from them, and it is legitimate. Cyber criminals every day are sending messages through Facebook and other social media that resemble the accounts of friends. They also can be good at making emails look like legitimate ones from friends or relatives. Be wary.

Here's how clicking on a link, or opening an attachment, can cause you trouble: Doing so can allow the criminals to get into your computer through “mal-ware” – short for malicious software – that can allow them to take control of your machine and do things like search for your credit-card information, passwords to banks or other financial accounts, or use other means to steal from you. They also have ways of taking control of your computer and threatening to destroy all the information on it if you don’t send them money.

Here are tips to help avoid falling into these traps: Don’t click, open or download unless you’ve heard from the person’s own voice that their request is legitimate. One way to see how devious such criminals can be is to hover your cursor over a link they have sent you and see whether that link they sent is the actual agency it pretends to be. It may look very similar to the organization’s legitimate website address, such as irs.gov, or usbank.com, but may have additional characters that would lead you to the criminals’ site instead.

Another tip in seeing a scam: When you receive a message that begins, “Dear customer,” instead of your name, that’s probably a fake that a cyber criminal sent to many thousands of people simultaneously, hoping just a few would fall into their trap, Reynolds said.

Something else to avoid

People also can steal your information when you use public Wi-Fi to surf the web at restaurants, parks or other places where they can see what you’re doing online.

Key tips to protect yourself and others

Some tips to avoid being tricked by phishing emails, from Reynolds and others who recommend ways to avoid cyber crime:

Snuffing out such schemes

To help law enforcement deal with the cyber criminals, the FBI urges you to report such schemes: “We encourage everyone to use IC3 and reach out to their local FBI field office to report malicious activity,” Paul Abbate, deputy director of the FBI, said in recommending a key way ordinary citizens and companies can help foil cyber crime.

Victims of such crimes are asked to report them to www.ic3.gov.

Click here to see the FBI’s Internet Crime Report for 2021.

Also, Click on the button below to get a copy of the ERS Decision Guide....

By
Kristin Davenport
Kristin Davenport is the Director of Communications for Episcopal Retirement Services (ERS). Kristin leads ERS’s efforts to share stories that delight and inspire through social media, online content, annual reports, magazines, newsletters, public relations, and events. Kristin earned her BFA in graphic design from Wittenberg University. She joined ERS in 2014 after a 25-year career as a visual journalist and creative director with American City Business Journals. Her role at ERS has ignited her passion for making Cincinnati a dementia-inclusive city, and she spends time with residents as a SAIDO® Learning lead supporter. Kristin is the executive producer and co-host of the Linkage Podcast for ERS. Kristin and her husband Alex live in Lebanon, Ohio, with their two daughters. She also serves as a Trustee and the President of the Lebanon Food Pantry and is a board member for ArtScape Lebanon, where she teaches painting and has an art studio, Indium Art.
living well cyber crime Avoid crime