Dealing With Dementia: One Daughter’s Journal

Dealing With Dementia: One Daughter’s Journal

A Conversation with Jomiya Coleman, A...

Research Shows the Benefits of Living...

There are some days that I can’t get the motivation to call Mom on the phone. I never know how she will be. Will she be too tired, will she be confused, will she feel bad, will she be in pain? Some days it’s too stressful for me to make the call. Then comes the guilt...again. Feeling selfish.

She is so afraid. She is so afraid of forgetting...everything, everyone, herself. Afraid of the indignity that comes in the late stages of the disease.

Anne began journaling and then blogging shortly after her mother, Marilyn Forrester, a former Episcopal Church Home Dudley Square resident, was diagnosed with dementia in the fall of 2006. Anne was filled with questions about how her father was going to take care of both his wife and himself, how much her dementia care would cost and how the disease would change all of their lives.

“I was literally losing sleep over this whole thing,” she says. “I thought, ‘surely there are other people out there who feel this way.’”

Writing down her thoughts became a therapeutic way for her to cope with the disease, and eventually, for her to realize that she was not alone.

Now, Anne has turned her blog into a book, titled The Blue Velvet Drape: Dealing with Dementia — Her Daughter's Journal, in the hopes of helping others struggling to care for loved ones living with the disease.

Marilyn’s health problems started long before her dementia diagnosis. She had complained to doctors about chest pain and fatigue for years, and despite a family history of heart disease, they dismissed her symptoms as nerves, stress, depression or “a young housewife’s battle fatigue.” 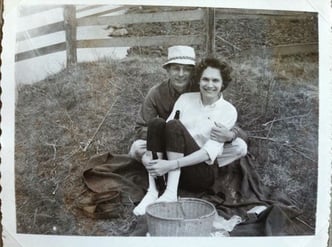 Finally, when Marilyn was 41, she was diagnosed with coronary artery disease and told that she might not live to her 42nd birthday. Anne was only 12. Marilyn quit smoking, had three heart bypass surgeries and proved doctors wrong by living until the age of 75 — despite subsequent diagnoses of fibromyalgia, osteoarthritis, osteoporosis, multiple sclerosis, Type 2 diabetes and finally, vascular dementia.

To the family, the dementia diagnosis was the worst of all.

“When they told us that, I got this feeling like I was drowning,” Anne recalls. “I was so sad that one day she wouldn’t know who I was. We had always been so close.”

Dementia took its toll on Marilyn slowly. In the early stages, her long-term memory was fairly intact, but she would repeat herself and ask the same questions as her short-term memory started to slip away.

Still, she kept her sense of humor. She came up with her own name for the disease: CRS, for “Can’t Remember S---.” And she and her husband were able to do some traveling before her dementia worsened.

“She just made the best of her life and enjoyed every bit that she was able to,” Anne says.

As the disease progressed, her memory worsened. She also developed Sundowner’s Syndrome, which made her become more agitated and angry toward the end of the day. She sometimes thought her husband was her father, and that their house was the house that she grew up in. At one point, she believed she was engaged to an old high school boyfriend.

I think in some ways my dad is still in denial. I cannot convince him to put her name on a waiting list for the Memory Care Wing at the Episcopal Church Home (for Alzheimer’s and Dementia patients). He keeps saying, “I’m not ready for that.” I don’t think any of us are but it must be done. How can I convince him? How will we ever get through this? How do other families do it? What is happening to my wonderful, loving parents?

Hal and Marilyn hired a caregiver to come to their house for a few hours a day during the week to help care for Marilyn. But after some frightening episodes when she wandered out of the house and took the car without telling anyone — and with both Anne and her sister busy with families of their own — they realized she needed to be somewhere where she could get help more quickly if needed. 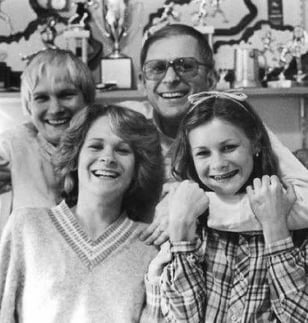 Marilyn’s sister Margaret had put her name on the waiting list at Dudley Square, ECH’s independent living neighborhood, but when her name came up, she wasn’t ready to make the move. So she decided to give her spot to Marilyn and Hal.

“They both agreed it was the best decision they ever made to sell their house and move to Dudley Square,” Anne said.

However, complications arose when Hal needed knee surgery, and then short-term rehab to recover. His absence plunged Marilyn further into confusion. She couldn’t remember that he had surgery, and then she would become angry with Hal because she thought he hadn’t told her about it. The family had to accept the hard truth that Hal could not take care of Marilyn in their own apartment as he had once hoped.

So one September day — which happened to be Hal and Marilyn’s 49th wedding anniversary — they moved Marilyn into one of ECH’s memory care neighborhoods.

But as is often the case with people with dementia, the move was difficult for Marilyn. Anne recalls how her mother would call her in the middle of the night, crying and saying she wanted to go home, or worse, swearing and accusing her daughter of putting her there to die.

I miss my mother, terribly!!! Why did this monster have to come and take her over? Mom, I miss you so much. Why is this happening to you? There is so little of you left...I wish you could come back to me, to our family. I am so sad that I will never get to see you again. This just isn’t fair. I love you, Mom.

Anne says she’s sure that her mother would have adapted to her new surroundings if she had more time to adjust. But at the time, unable to bear watching Marilyn suffer, the family decided to move her back to the Dudley Square apartment and receive assistance from her caregiver.

The family also found help and encouragement in a support group at ECH, filled with other families who were going through the same struggles.

“We always left those meetings feeling empowered,” she said.

ECH also provided support in other ways. One winter, they staged a wedding ceremony for Hal and Marilyn because Marilyn did not remember marrying Hal more than 50 years earlier. That’s just one way that ECH works to maintain the happiness and dignity of residents with Alzheimer’s and dementia.

And Anne continued blogging to cope. What had begun as a journal read mainly by friends and family blossomed into a blog that grew to several hundred views, then 2,000, and then 4,000.

“My writing is what has saved me from the stress of the disease, dementia, that has taken over my mother,” she wrote in March of 2012.

Shortly after that entry, Marilyn took a turn for the worse. Food began making her feel nauseous. Her dementia was making her increasingly angry. And she was experiencing congestive heart failure on a biweekly or monthly basis.

At the suggestion of another member of her support group, the family began in-home hospice care to keep Marilyn from repeatedly being admitted to the hospital and to make her more comfortable.

Anne documented all of her mother’s final days on her blog: Getting chocolate ice cream, her favorite, at the Comfy Cow in Westport Village just a week before she died. The family’s decision to admit Marilyn to the hospice wing of a hospital. Anne’s feelings of deep sadness mixed with relief that her mother soon would no longer be in pain and living in a perpetual state of fear and confusion. The tearful goodbyes from family members and friends. And finally, the early morning phone call from her sister saying that her mother had passed. (It’s in one of these entries that Anne reveals the meaning behind the title of her book.) 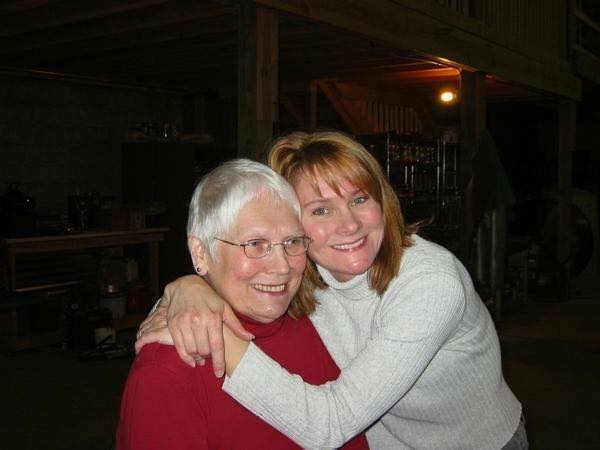 A few weeks later, Anne went back to the Comfy Cow and took a photo of where she and her mother had sat. She reflected on how thankful she was that she had a final moment of clarity with her mother as they enjoyed one of their favorite treats together. Then she picked up a chocolate malt for her father — and for herself.

“Time to start making NEW happy memories,” she wrote. “It’s all part of healing. Mom, I miss you every day.”

Lessons Learned and Given

Anne published her blog as a book in 2017, at the encouragement of her father as well as ECH pastor and support group leader Georgine Buckwalter. It’s now available on Amazon.

She also became a member of AlzAuthors, a nonprofit website that shares information about books and blogs about Alzheimer’s and dementia. In July 2018, Anne and about 150 authors from around the world were represented at the Alzheimer’s Association — Western Carolina Chapter’s Dementia Education Conference in Charlotte, North Carolina.

Her advice to readers and friends coping with a loved one with Alzheimer’s or dementia:

Finally, “realize you cannot do the caregiving by yourself,” Anne says. “You have to have help. Don’t be afraid to ask for help.”

Episcopal Church Home’s monthly Family Support Group is designed to provide caregivers with an opportunity to discuss caregiving challenges and share helpful tips, while receiving support from others who are in similar situations. It typically meets the third Wednesday of each month, from 7:30-9 p.m., on our campus, 7504 Westport Road, Louisville, KY 40222.

Like our Facebook page for news and updates about upcoming meetings, and call Paula Cates or Cecy Grisham King, 502-736-7800, if you need more information.

By
Kristin Davenport
Kristin Davenport is the Director of Communications for Episcopal Retirement Services (ERS). Kristin leads ERS’s efforts to share stories that delight and inspire through social media, online content, annual reports, magazines, newsletters, public relations, and events. Kristin earned her BFA in graphic design from Wittenberg University. She joined ERS in 2014 after a 25-year career as a visual journalist and creative director with American City Business Journals. Her role at ERS has ignited her passion for making Cincinnati a dementia-inclusive city, and she spends time with residents as a SAIDO® Learning lead supporter. Kristin is the executive producer and co-host of the Linkage Podcast for ERS. Kristin and her husband Alex live in Lebanon, Ohio, with their two daughters. She also serves as a Trustee and the President of the Lebanon Food Pantry and is a board member for ArtScape Lebanon, where she teaches painting and has an art studio, Indium Art.
dementia memory care Episcopal Church Home

Five Tips for Spending the Holidays With a Parent with Alzheimer's