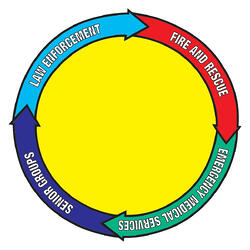 ERH and Cincinnati retirement community residents have been leading a ush for Ohio to participate in the Yellow Dot Program, a senior safety initiative that focuses on calling first responders’ attention to senior citizens’ unique medical needs in the event of an accident. The Yellow Dot Program has already been implemented with great success in Connecticut, New York and Alabama where it has been credited with reducing negative outcomes and saving the lives of older drivers involved in serious motor vehicle accidents.

Medical and medication history are important when treating traumatic injuries.

As any police officer, firefighter or emergency medical technician can tell you, pertinent medical history is critical to saving lives on the scene of a serious accident. This is especially true when the victim is a senior citizen as many older people have chronic medical conditions that require extensive management with medications that can impact how they respond to treatment.

Some of the more common medications that seniors are prescribed — blood-thinning medications like Coumadin (warfarin) and Plavix, benzodiazepines (Xanax, Valium) and anticholinergic medicines such as Bentyl or Norflex — can cause major complications and even increase the likelihood of death if they are not accounted for when treating a traumatic injury.

If a senior driver is injured and is unable to relate medical and prescription history to a first responder on the scene of an accident, chances for full recovery can be reduced. In realization of this, the first Yellow Dot Program was started in Connecticut in 2002.

How does a Yellow Dot Program work?

The Yellow Dot Program provides participating older persons with a Yellow Dot bumper sticker which alerts first responders to the presence of a bright yellow dossier in the glove compartment.

Participants place a head shot and a form detailing medical conditions, vital information and prescription regimen into the yellow folder. If the driver is incapacitated in an accident, medical personnel will still be able to find this potentially-lifesaving information.

Although there have been efforts to develop modules within electronic crash notification systems that could automatically notify first responders of victims’ unique medical needs, such systems are not yet in widespread use. The Yellow Dot Program is designed as an interim measure.

“It's a promising approach,” according to Jonathan Adkins, the spokesman for the Governors Highway Safety Association, who was recently quoted in USA TODAY.

"Actually, this is one of the goals of automated crash notification systems. Eventually, when there is a crash, these key data such as medication[s] needed will automatically be available to EMTs,” he said. ”The Yellow Dot program may be a system that can be helpful in the meantime."

Ohio may soon implement its own statewide program, all thanks to one Deupree House resident.

JoAnn Plotkin requires an oxygen tank, and she was worried about driving with her O2 tank in her vehicle. When she read news reports about the Yellow Dot Program and its successes in saving lives in other states, she approached ERH staff about developing a similar program in Cincinnati.

The idea took off.

In the two years since Plotkin’s initiative got started, ERH has distributed over 5,000 Yellow Dot stickers to senior residents in Central and Southwestern Ohio via churches and local senior advocacy groups. The program is managed by ERH’s Parish Health Ministry, which is tasked with helping churches to “renew their role in health and wellness through advocacy, education and activities.”

Now, the Ohio General Assembly is considering whether to mandate the program statewide.

“The info comes in a zip-lock plastic bag with a bright yellow form,” said Parish Health Ministry Coordinator Rose Lindeman. “We’ve been doing our best to get it out there, but once the state is behind us that will help immensely.”

Although legislation proposed in the last term was not brought to the floor for a vote, Connie Pillich, the Representative for the 28th District, reintroduced a bill last September that reportedly enjoys bipartisan support. The bill, H.B. No. 273, would require the Ohio Department of Public Safety to provide a Yellow Dot sticker and folder free of charge to any driver who wishes to participate in the program. The bill will be debated in the coming fall.

“The police and firemen we talk to are very supportive,” she said. “First responders know the value of having this type of information.”

By
Bryan Reynolds
Bryan Reynolds is the Vice President of Marketing and Public Relations for Episcopal Retirement Services (ERS). Bryan is responsible for developing and implementing ERS' digital marketing strategy, and overseeing the website, social media outlets, audio and video content and online advertising. After originally attending The Ohio State University, he graduated from the College-Conservatory of Music at the University of Cincinnati, where he earned a Bachelor of fine arts focused on electronic media. Bryan loves to share his passion for technology by assisting older adults with their computer and mobile devices. He has taught several classes within ERS communities as well as at the Osher Lifelong Learning Institute run by the University of Cincinnati. He also participates on the Technology Team at ERS to help provide direction. Bryan and his wife Krista currently reside in Lebanon, Ohio with their 5 children.
Episcopal Retirement Homes senior health programs senior living safety