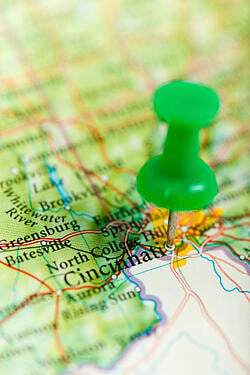 For those of us who have spent much of our lives in Cincinnati, getting around the area is a snap. But if you’ve just retired in the city, the thought of navigating the Greater Cincinnati area on your own can be a dizzying prospect.

Our hills are lovely. But they give us roads that curve and twist and always seem to end up nowhere close to where you thought they were going.

Unlike other cities that are laid out on a nice, neat grid, there really are places in Cincinnati where there is no direct route from Point A to Point B. It can all get pretty frustrating for seniors who aren’t familiar with the meandering streets, but the secret is to enjoy the adventure, the views and abundance of wonderful neighborhoods.

Until you get familiar with the city, it’s easy enough to find a GPS guidance system that will fit your car. Or you can just use the one that is almost certainly in your mobile telephone.

That said, there are a few tips that make navigating Greater Cincinnati a little bit easier.

So people who claim “Cincinnati” as home could be talking about anywhere within a 4,465 square mile area centered roughly on downtown Cincinnati.

Then Map the Main Highways

There are four major byways that will take you past all the major cities and towns in the Greater Cincinnati area—and beyond!

I–75. The oldest of our local Interstates, it is still referred to by many seniors as the Mill Creek Expressway.

I-71. For those of us living on the east side of Cincinnati, this is an oft-used highway.

I-74.  The gateway to the city’s northwestern suburbs. It dead-ends into I-75 near the Clifton neighborhood. It’s the road to Mt. Airy Forest, Miamitown and, eventually, Indianapolis.

I-275. A sprawling ring road that feels like it goes forever. But it is occasionally handy. To get to the airport, for instance, you take I-75/I-71 south and connect briefly to I-275.

There are three of them. And if you are out and about with any regularity, you will almost inevitably find yourself relying on these roads.

I-471. Because of the directional quirks in the Ohio River, the shortest route from downtown Cincinnati to many of the eastern suburbs is to take I-471 a few miles into northern Kentucky, then pick up I-275 east back into Ohio. Odd, but true.

State Rte. 562. First, you need to know that you will almost never hear anyone refer to this as Route 562. Rather, you will almost always hear it referred to as “The Norwood Lateral.” But that’s not a name you will find on any sign. Look for 562, but listen to Norwood Lateral. It’s only 3.5 miles long. But it is invaluable, as it connects I-75 to I-71.

State Rte. 126, Ronald Reagan Cross County Highway. Most people of a certain age will call this simply “The Cross-County Highway.” The Reagan name was added in 1993. It stretches from I-275 in the west to Montgomery Road in the east, though the most heavily traveled portion is the section between I-75 (near Reading) and I-75 (near Blue Ash and Montgomery).

One more thing that you’ve probably already learned about that bears reviewing.

It has to do with our airports. Could they be any more confusing?

The Municipal Airport is in Cincinnati. But we call it Lunken Airport. And though it has a handful of commercial flights, if you’re looking to leave town, you want the real airport, which is in Kentucky.

Officially, that airport is called the Cincinnati/Northern Kentucky International Airport. Some people refer to it by its official airport code, which is CVG. That stands for “Covington.” But since the airport is located in Hebron, Kentucky, you’ve got one more bit of confusion to sort out.

So welcome to Cincinnati. And best of luck.

We may be confusing. But we’re worth it.

By
Bryan Reynolds
Bryan Reynolds is the Vice President of Marketing and Public Relations for Episcopal Retirement Services (ERS). Bryan is responsible for developing and implementing ERS' digital marketing strategy, and overseeing the website, social media outlets, audio and video content and online advertising. After originally attending The Ohio State University, he graduated from the College-Conservatory of Music at the University of Cincinnati, where he earned a Bachelor of fine arts focused on electronic media. Bryan loves to share his passion for technology by assisting older adults with their computer and mobile devices. He has taught several classes within ERS communities as well as at the Osher Lifelong Learning Institute run by the University of Cincinnati. He also participates on the Technology Team at ERS to help provide direction. Bryan and his wife Krista currently reside in Lebanon, Ohio with their 5 children.
activities for seniors life after retirement travel Senior Life senior living Cincinnati

Fall in Love with Cincinnati after Retirement