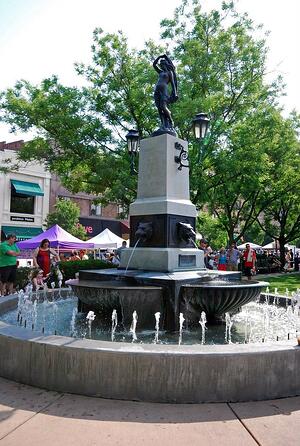 Hyde Park is, without a doubt, one of Cincinnati’s most desirable communities. With easy access to shopping, downtown and major highways, it is a prime example of lifestyle that balances urban sophistication with historic charm.

When Hyde Park was founded in 1892, Cincinnati’s population hovered around 300,000, making it the 9th largest city in the nation. Developers had already crowded the riverside communities and the hills overlooking downtown Cincinnati.

A group of wealthy and well-connected men with now-familiar names like Kilgour, Mooney, Burch and Zumstein pooled their prodigious funds and formed the Mornington Syndicate. They proceeded to purchase nearly all the property in a triangle formed by Edwards Road, Observatory Ave. and what was then known as Madison Pike.

Soon, there were massive improvements— a grid of streets, paved boulevards, street cars connecting the new neighborhood to the rest of the city. But it went without name until one member suggested renaming Mornington Syndicate after a well-to-do town outside of New York City – Hyde Park.

And so Cincinnati had what would become and remain, for more than 120 years, one of its most exclusive and sought-after communities.

And with plenty of local highlights, it’s the perfect place to kick back and enjoy life after retirement.

The centerpiece of life in Hyde Park, this classic town square spills out from its center along Erie Avenue between Edwards Road and Michigan Avenue, filled with independent restaurants, banks, a firehouse, a post office and shops. You’ll find everything here, from fine jewelry and wine to children’s clothes and yoga gear.

Located on a sleepy side street off Observatory Avenue, this is the oldest professional observatory in the United States. Its original location (in 1843) was in what we now know as Mt. Adams. Thirty years later, it moved to its current location to escape the lights and pollution of downtown. There are a wide variety of public programs at the observatory, including many opportunities to view the heavens through one of its two large telescopes. (3489 Observatory Place, 513-321-5186, Cincinnatiobservatory.org.)

Even though this sprawling shopping center is technically not in the community proper, located a stone’s throw from the Hyde Park border at the corner of Madison and Edwards roads, it is a favorite destination for Deupree residents. Filled with a wide range of restaurants and, in some cases, exclusive outlets— Whole Foods Market, Joseph-Beth Booksellers, Sur La Table, REI and many others— it is one of the area’s most in-demand shopping destinations.

You don’t have to give up the pleasures of country club life if you move back to the city after retirement— Hyde Park has two of them! Cincinnati Country Club is at the west end of Hyde Park near the corner of Observatory Avenue and Madison Road, though the entrance is on Grandin Road, while Hyde Park Golf & Country Club is in the northwestern reaches of Hyde Park on Erie Ave.

There are several fine galleries in the community, but three of the most intriguing and best-established are the Malton Gallery (3804 Edwards Rd., across from Rookwood Commons), the Miller Gallery (2715 Erie Ave., on Hyde Park Square) and the Raymond Gallery/The Framery (3508 Edwards Rd., just off Hyde Park Square).

Summertime in Hyde Park heralds the start of the community’s a first-class urban farmers’ market, filled with vendors selling mostly organic products and produce from small, independent farms. Traditionally, it takes place every Sunday from June through September from 9:30 a.m. to 1:30 p.m. in the U.S. Bank parking lot located at 3424 Edwards Rd., between Erie and Observatory avenues.

Once again, all signs point to Hyde Park Square. The 2014 Hyde Park Art Show, on October 5, will be the 48th annual gathering. It is the largest one-day curated art show in Greater Cincinnati, typically displaying the works of more than 200 artists.

By
Bryan Reynolds
Bryan Reynolds is the Vice President of Marketing and Public Relations for Episcopal Retirement Services (ERS). Bryan is responsible for developing and implementing ERS' digital marketing strategy, and overseeing the website, social media outlets, audio and video content and online advertising. After originally attending The Ohio State University, he graduated from the College-Conservatory of Music at the University of Cincinnati, where he earned a Bachelor of fine arts focused on electronic media. Bryan loves to share his passion for technology by assisting older adults with their computer and mobile devices. He has taught several classes within ERS communities as well as at the Osher Lifelong Learning Institute run by the University of Cincinnati. He also participates on the Technology Team at ERS to help provide direction. Bryan and his wife Krista currently reside in Lebanon, Ohio with their 5 children.
activities for seniors life after retirement senior living Hyde Park