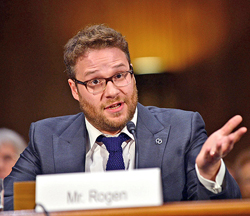 With over 5 million Americans facing Alzheimer’s disease, it is no wonder that it is a disease that has been put in the senior healthcare spotlight as more and more prominent men and women in our country step up as advocates.

In February of 2014, comedian Seth Rogen sat before a U.S. Senate subcommittee to tell the story of how early onset dementia is affecting his family. With this address, Rogen joined a long list of famous names such as Penny Marshall, Maria Shriver and Bryant Gumbel in calling for more funds to go into research aimed at fighting the sixth leading cause of death in the United States.

But what is being done in response to their cries?

Past Funding for Dementia Research

History shows that research for Alzheimer’s and related dementias has been a low priority in the United States. The National Institutes of Health spent just 500 million dollars in the past for dementia research, compared to 3 billion dollars of funding of AIDS projects. This may, in part, be due to poor lobbying tactics. Families and victims of dementia are unable to come to Washington to fight for their cause the way a cancer survivors can, for example.

Alzheimer’s care requires long term commitment that drains the financial resources of those it touches. The victims are not well enough to march on the capital and not many are wealthy enough to hire expensive advocates to lobby for improved funding.

The public sees this as an “old person’s disease” and that stigma means less attention. Attitudes and public awareness are changing, however, in part due to famous names like Seth Rogen standing up for the cause.

In 2012, President Barack Obama announced a national plan to expand research in this area. The campaign addresses prevention and treatment options for Alzheimer’s and related dementias with effective options in place by the year 2025. The 2011 National Alzheimer’s Project Act provides the blueprint to meet this goal, focusing on five different areas.

Part of senior healthcare research is testing drugs that slow the disease progression.

NIA-supported Alzheimer’s disease Cooperative Study enlists the help of academic medical centers around the country for testing drug therapies. The latest round of studies focuses on a combination of exercise and medication. For example, Anti-Amyloid Treatment in Asymptomatic Alzheimer’s Disease is a preventative medication capable of clearing amyloid deposits, plaque-like substances that build up in brain tissue believed to be a possible cause of dementia.

Currently, Alzheimer’s diagnosis is more of an art than a science, determined through an assessment of the patient’s intellectual functioning rather than genetic markers (which have yet to be categorically determined) or chemical imbalances.

But improved imaging may be the key to better diagnosis. Clinical imaging will give researchers a way to understand how different conditions change the structure of the brain. The National Institute of Aging is researching PET scanning processes that allow doctors to see amyloids build up for early detection and treatment.

Outside the U.S. Borders

The United States is not the only country getting involved in the fight. Dementia affects about 800,000 people in the United Kingdom. In 2013, the UK government held a dementia summit to discuss breakthroughs in the prevention of this condition. The prime minister announced that more than £2 billion of private sector funds would go to a long-term plan to develop practical treatment options. The government also doubled their funding towards research, committing up to £66 million by the year 2015.

As a nation, we are looking closely into dementia research to improve senior healthcare options that much is clear. Public awareness and vocal advocate, like Seth Rogen, are making Alzheimer’s and other dementias a primary focus.

By
Bryan Reynolds
Bryan Reynolds is the Vice President of Marketing and Public Relations for Episcopal Retirement Services (ERS). Bryan is responsible for developing and implementing ERS' digital marketing strategy, and overseeing the website, social media outlets, audio and video content and online advertising. After originally attending The Ohio State University, he graduated from the College-Conservatory of Music at the University of Cincinnati, where he earned a Bachelor of fine arts focused on electronic media. Bryan loves to share his passion for technology by assisting older adults with their computer and mobile devices. He has taught several classes within ERS communities as well as at the Osher Lifelong Learning Institute run by the University of Cincinnati. He also participates on the Technology Team at ERS to help provide direction. Bryan and his wife Krista currently reside in Lebanon, Ohio with their 5 children.
Memory Support alzheimer's and dementia Alzheimer's senior healthcare senior health programs senior health Mental Health Alzheimers