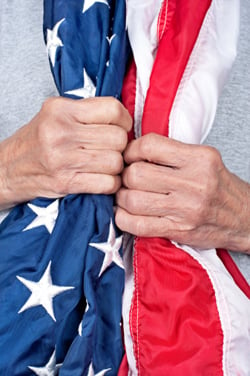 Across the country, more than 5 million men and women suffer from dementia, according to the Alzheimer’s Association. As the population ages, the agency predicts more than 7 million people will have the disease by 2025, representing a 40 percent increase. By 2050, the Alzheimer’s Association says that number could top 13.8 million, assuming no treatment has been found to prevent the disease or slow its progression.

National movements to make communities dementia-friendly is a concept that has taken hold in Europe, but has been slower to take root in the U.S. But some states, and individual communities, have begun to take matters into their own hands, creating their own programs and holding collaborative summits to share knowledge and gain a better understanding of the needs of people with dementia.

Take, for example, two stories from Wisconsin and Minnesota.

These states may have cold weather, but residents have shown that they have exceptionally warm hearts-- at least when it comes to caring for elderly community members with dementia. Towns in both states have recently developed community-based programs aimed specifically at helping men and women with dementia function better in their communities, helping them age in a familiar environment.

The Story from Watertown, WI

In Watertown, a Wisconsin community with a population of about 23,000, dementia-friendly businesses display their status by posting small purple angel decals in their windows. Customers who see the angels know that employees have been trained to help them find what they need and assist them and their caregivers with purchases.

For instance, since speech is often compromised among people with dementia, customers with memory issues may be asked to point to items they want to buy rather than having to use words.

The community’s initiative was developed through a partnership between Alzheimer's Speaks, an advocacy group in St. Paul, and other local and statewide groups. The senior healthcare program provides advocacy for the state’s 120,000 residents who suffer from dementia as well as the thousands of family members and other loved ones who care for them.

And Wisconsin has been one of those states most dedicated to developing state-wide programs.

The state’s Department of Health Services this year published its “Plan for a Dementia-Capable Wisconsin,” a comprehensive treatise that reviews current standards of care throughout the state, identifies gaps in care, services and other support, and explores novel options to expand existing services and develop new programs. The plan sets clear goals for key stakeholders who can play critical roles in helping people with dementia get the care and services they need.

Programs similar to the one in Watertown are under way in Minnesota, where the statewide volunteer coalition group, ACT on Alzheimer's, has already helped seven towns and cities take steps toward developing their own "dementia-friendly" programs. One town is Walker, which enables local businesses to earn dementia friendly status, an indication that the people who work in those businesses have a special understanding of the needs of patients with Alzheimer’s and other types of dementia.

About 100,000 Minnesotans have dementia, a number that is supposed to grow significantly during the next 10 years. ACT on Alzheimer’s was formed to provide support and guidance to towns like Walker who want to help people with dementia feel safe and comfortable within their own communities. The program provides seed money for communities to increase support for those with dementia as well as their caregivers. ACT on Alzheimer’s has partnerships with more than five dozen agencies across the state including AARP of Minnesota.

Become an Advocate for Change in Your Community

By
Bryan Reynolds
Bryan Reynolds is the Vice President of Marketing and Public Relations for Episcopal Retirement Services (ERS). Bryan is responsible for developing and implementing ERS' digital marketing strategy, and overseeing the website, social media outlets, audio and video content and online advertising. After originally attending The Ohio State University, he graduated from the College-Conservatory of Music at the University of Cincinnati, where he earned a Bachelor of fine arts focused on electronic media. Bryan loves to share his passion for technology by assisting older adults with their computer and mobile devices. He has taught several classes within ERS communities as well as at the Osher Lifelong Learning Institute run by the University of Cincinnati. He also participates on the Technology Team at ERS to help provide direction. Bryan and his wife Krista currently reside in Lebanon, Ohio with their 5 children.
Memory Support alzheimer's and dementia mental wellness Alzheimer's senior healthcare senior health programs senior health Mental Health Alzheimers