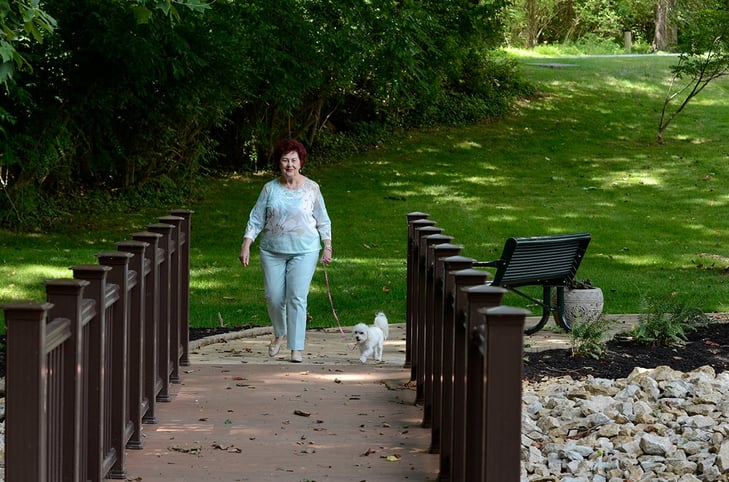 The Friends of Deupree House had read their Emerson.

“The health of the eye seems to demand a horizon,” the transcendentalist poet wrote in his seminal 1836 pamphlet, Nature. “We are never tired, so long as we can see far enough.”

Inspired by that observation, the group had long held a desire to build a walking path on the campus of Deupree House senior living community — one that all its residents and staff could enjoy. This month, their dream became a reality.

Completed in June, the path was entirely funded through the generosity of the anonymous group of donors who comprise the Friends of Deupree House.

The 5-foot-wide, lighted path extends from the visitor parking lot, near the community’s Erie Avenue entrance, along the wooded edge of the property. After making a dog leg turn around the Deupree II building, the path curves back to cross scenic Duck Creek, then ends at a newly-constructed gazebo across from the Deupree Cottages.

“This was something we had envisioned before we built Deupree II,” explained Episcopal Retirement Services (ERS) President and CEO Laura Lamb, who worked with the Friends of Deupree House to implement the project. “However, as construction goes, we had to make some really tough decisions.” 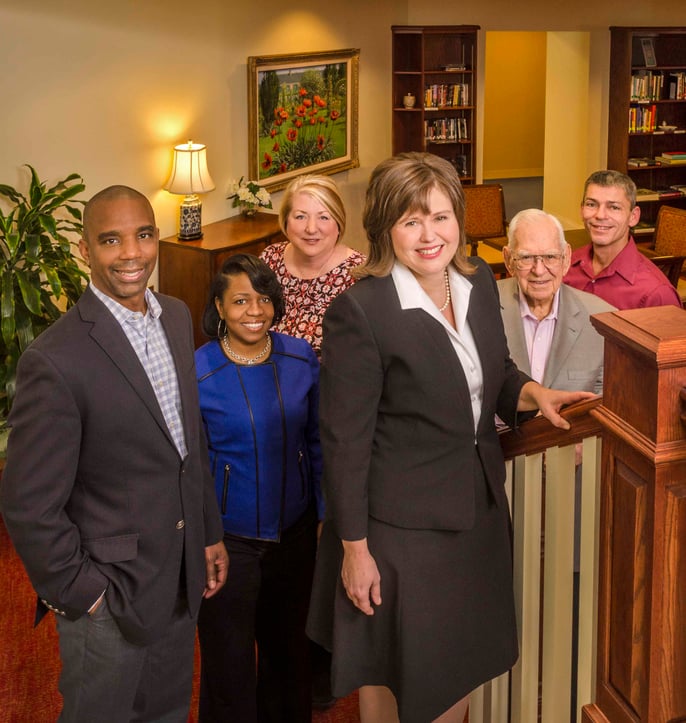 With the demand exponentially rising for residential retirement care in the Tristate, ERS needed to divert more resources toward Deupree II’s completion and completion of other projects — such as Affordable Living by ERS refurbishments and new community openings — before the Deupree House walking trail could be built.

Still, the need for a safe outdoor walking space there remained top of mind for both the Friends of Deupree House and for ERS’s leadership team.

“The Friends approached me and said: ‘We love Deupree. It’s perfect in every way, with one exception.’ And the one exception was that before the walking trail, there was really not one point where you could sit on our campus and not have a building or a structure within your view,“ Lamb remembered.

“That was very important for the Friends, just to have a place or places to go where [residents] could forget that they’re in an urban setting, where they could be at peace with nature,” she said.

That’s certainly what Deupree House residents can now do. The Friends called the path an “Aside Walk” — rather than “sidewalk” — because it, in their view, is a “place to step aside and relax from one’s normal daily routine, a place to take a friend aside and share a few thoughts, and a quiet place to be, aside from others, from time to time.” 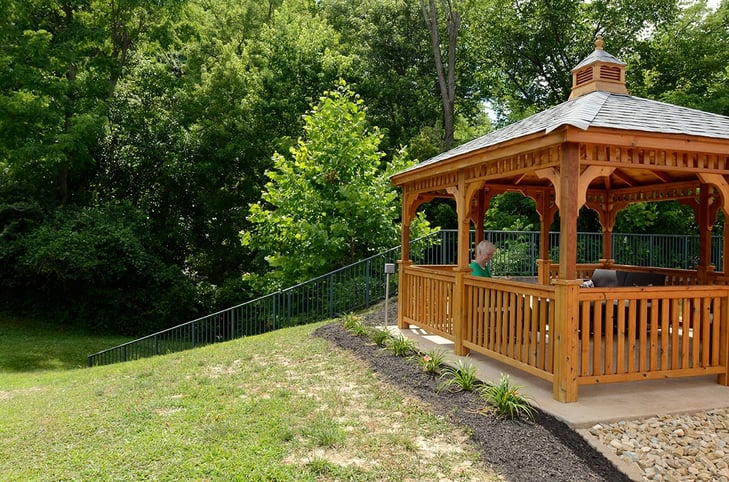 (Cottages resident Barb Reilly was glad to learn that a quiet place to
read in nature was just steps from her front door. Photos by Gary Kessler.)

The wooded area beyond the path provides excellent shade and attracts a wide variety of wildlife, including migratory birds, deer, rabbits, woodchucks, chipmunks and other small mammals. It also provides a relaxing, lushly green vista that’s perfect for losing yourself in refreshing thought.

The “aside walk” functions also as a connection between two communities — the Deupree House independent living portion of the campus, and the Deupree Cottages skilled nursing unit. The walkway’s course was designed to provide a corridor for residents of both developments to meet each other in passing and socialize.

The gazebo was intentionally placed at Deupree Cottages’ end of the walkway, to enable all residents of Deupree’s campus to enjoy it.

“The thought process was that, for the Cottages residents, who have more difficulty ambulating, wouldn’t it be great to have a nice covered structure closer to them, because the folks over at Deupree House are more independent in their abilities,” Lamb said.

It’s that sort of forward thinking that keeps Lamb and other ERS team members inspired in their efforts to deliver person-centered care to Cincinnati’s seniors.

“I really enjoyed working with [the Friends of Deupree House], because they’re so thoughtful,” she said. “I think it’s an essential part of our overall well-being approach that we make sure we give as many opportunities as possible to elders to remain physically, mentally and spiritually active.” By
Bryan Reynolds
Bryan Reynolds is the Vice President of Marketing and Public Relations for Episcopal Retirement Services (ERS). Bryan is responsible for developing and implementing ERS' digital marketing strategy, and overseeing the website, social media outlets, audio and video content and online advertising. After originally attending The Ohio State University, he graduated from the College-Conservatory of Music at the University of Cincinnati, where he earned a Bachelor of fine arts focused on electronic media. Bryan loves to share his passion for technology by assisting older adults with their computer and mobile devices. He has taught several classes within ERS communities as well as at the Osher Lifelong Learning Institute run by the University of Cincinnati. He also participates on the Technology Team at ERS to help provide direction. Bryan and his wife Krista currently reside in Lebanon, Ohio with their 5 children.
living well Planning Ahead Deupree House life after retirement retirement living

Checklist ✔: How to Choose a Premier Senior Living Community