Like most places with a past, Deupree House begins with a story.

Our story is the story of Cincinnati and the visionary leaders of Episcopal Retirement Homes, Inc. It is a story of birth, growth, repurposing, and renewal.

A long, long time ago, Isaac Ferris, a Columbia farmer, acquired 200 acres of gentle valley lands from the Miami Purchase.  While the land was beautiful, with flowers, trees, and heather on the hills— the picturesque little brook that flowed along the land made development impossible.  Every spring the brook, now named Duck Creek, overflowed its banks and flooded out farmland and building sites.

As that surrounding land grew into Cincinnati and began to flourish, a group of prosperous citizens gave Ferris’ land purpose as a community they called Mornington who then would preserve the natural and architectural beauty of the area.  This community was annexed by the city of Cincinnati in 1903 and reborn as Hyde Park.

The start of living well.

With a need for housing in the 1960s, the final empty parcel of Mr. Ferris's land was developed by several local businessmen for upscale, downsized living. The building was named Deupree House, a name not really randomly chosen (Richard Deupree had been a former CEO of Procter & Gamble). It was built for luxury and living well with an outdoor pool and a grand staircase in the front lobby.

Many of our residents today can recall visiting the building in those early days.

Deupree eventually evolved into a naturally occurring retirement community, when older adults set up an informal network of friendships and activities.  Then, in September 1982, the building was acquired by the Memorial Homes Foundation, the organization dreamt up by church elders and charitable ladies like Marjorie P Lee, to operate Christian homes for the aged.

In line with that dream, Deupree House was to be developed as an independent living retirement community for approximately 100 people.

The rebirth of the Deupree House. 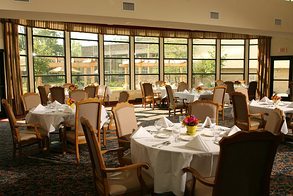 Construction of a dining room and a kitchen addition was completed in 1984, and Deupree House became the next step in gracious senior living for the Memorial Homes Foundation, rechristened Episcopal Retirement Homes, Inc. (ERH) in 1985.

After the initial renovations, services and other amenities such as on-site security, a lovely club room and private dining room continued to be added to ensure that Deupree House residents were living well.

In 2007, we added 60 new apartments and opened a state of the art wellness center featuring a spectacular indoor pool, exercise facilities we named the Fitness Zone, and an event center.  Just three years ago, we expanded again when the Deupree Cottages, a state-of-the-art nursing care and rehabilitation center that has received international acclaim for architecture as well as the highest standard of quality care based on our person-centered care philosophy.

We’re keeping true to our heritage at Deupree House.

Retirement living is what you make of it when you live at Deupree House.  We provide our residents with elegant surroundings, a friendly and helpful staff, a stimulating environment, and a continuum of care that offers peace of mind to keep you living well into the future.  We’re providing the options, so you can make the choices.

And, in the spirit of Marjorie P. Lee, her ladies and our other spiritual founders, we take part in some of the many charitable programs overseen by ERH.  In 1989, we instituted the Deupree Meals on Wheels program that still operates out of our kitchen, providing older adults in eastern Cincinnati with some 75,000 warm, nutritious meals and for the very important social contact.

We’re enriching the lives of older adults in a person-centered, spiritually based, innovative way.

If you’re looking for a premiere retirement community where you can live well by having all the options you could want to choose from, take a virtual tour to see if Deupree House is right for you.

By
Bryan Reynolds
Bryan Reynolds is the Vice President of Marketing and Public Relations for Episcopal Retirement Services (ERS). Bryan is responsible for developing and implementing ERS' digital marketing strategy, and overseeing the website, social media outlets, audio and video content and online advertising. After originally attending The Ohio State University, he graduated from the College-Conservatory of Music at the University of Cincinnati, where he earned a Bachelor of fine arts focused on electronic media. Bryan loves to share his passion for technology by assisting older adults with their computer and mobile devices. He has taught several classes within ERS communities as well as at the Osher Lifelong Learning Institute run by the University of Cincinnati. He also participates on the Technology Team at ERS to help provide direction. Bryan and his wife Krista currently reside in Lebanon, Ohio with their 5 children.
Deupree House continuing care retirement community Hyde Park