We Can Do Better... A Two-Year Update

We Can Do Better... A Two-Year Update

ERS President and CEO Laura Lamb gives an update on the We Can Do Better effort, two years after it was launched.

Two years after Episcopal Retirement Services launched its We Can Do Better in response to the killings of George Floyd, Ahmaud Arbery, and Breonna Taylor, President and CEO, Laura Lambs said she is proud of what ERS has accomplished since then but frustrated there is so much farther to go.

Since June of 2020, ERS team members and the board of directors have had difficult discussions about the pain racism, and racial bias inflict on people who are economically under-represented in American society and within the organization.

ERS has been doing the heavy lifting for two years, during a time it would be easy to say, "Oh, we have COVID. We have to put that on the shelf,’” as some other organizations did.

Some have expressed to the Servant Leadership Team members, “We’re so impressed that you’re keeping it moving because it’s exactly the right time to do it...”

But ERS has not put aside that effort. Instead, difficult conversations have continued, with team members talking during recent all-staff meetings about the trauma BIPOC people (Black, Indigenous, and people of color) experienced after recent mass shootings and other hateful episodes.

The May 14 shootings of 10 Black people by an 18-year-old white man in a Buffalo, N.Y. supermarket was among many reminders of how far society has to go in eliminating implicit- and explicit bias, as well as outright murderous hatred.

The shooter in Buffalo has been charged with domestic terrorism motivated by hate and 10 counts of first-degree murder.

ERS Vice President of Marketing and Public Relations Bryan Reynolds urged team members at a recent all-employee Internet meeting to guard against becoming numb and allowing grief to overcome them. Help is out there, and ERS team members are available to lend support.

While ERS is proud of the work it has done, its Servant Leadership Team knows so much work remains.

Listening, caring, reaching out, and allowing time off

ERS has focused on reaching out to team members after the Buffalo shootings to check in with them, individually and collectively. At the recent all-employee meeting, Reynolds noted the discussions could be difficult, but he emphasized their importance.

Managers have been encouraged to touch base with Black or brown team members who may be traumatized and encourage them to care for themselves or get assistance if they can use it.

Lamb said ERS is less rules-based than other organizations about allowing time off.

If, after traumatic events, team members need to check in with family because these events cut so close to home, she encourages them to do so. "That’s no different, to me than if you woke up not feeling well, kind of thing,” she said.

ERS seeks to be very intentional about checking in with team members, such as by:

Another large focus of We Can Do Better is the Lauren Brown Empowerment Fund, created to assist ERS team members who are members of minorities that historically have had fewer economic advantages than their white counterparts.

ERS’s goal is to create a $500,000 Lauran Brown endowment for the program, which will provide non-traditional forms of assistance for team members’ careers, no matter what those careers may be, and even if where they end up working isn’t at ERS. The fund is named for beloved ERS team member Lauren Zenobia Brown, a single Black mother who joined ERS while in high school. She was advancing at ERS, but died in April 2021, at age 33. 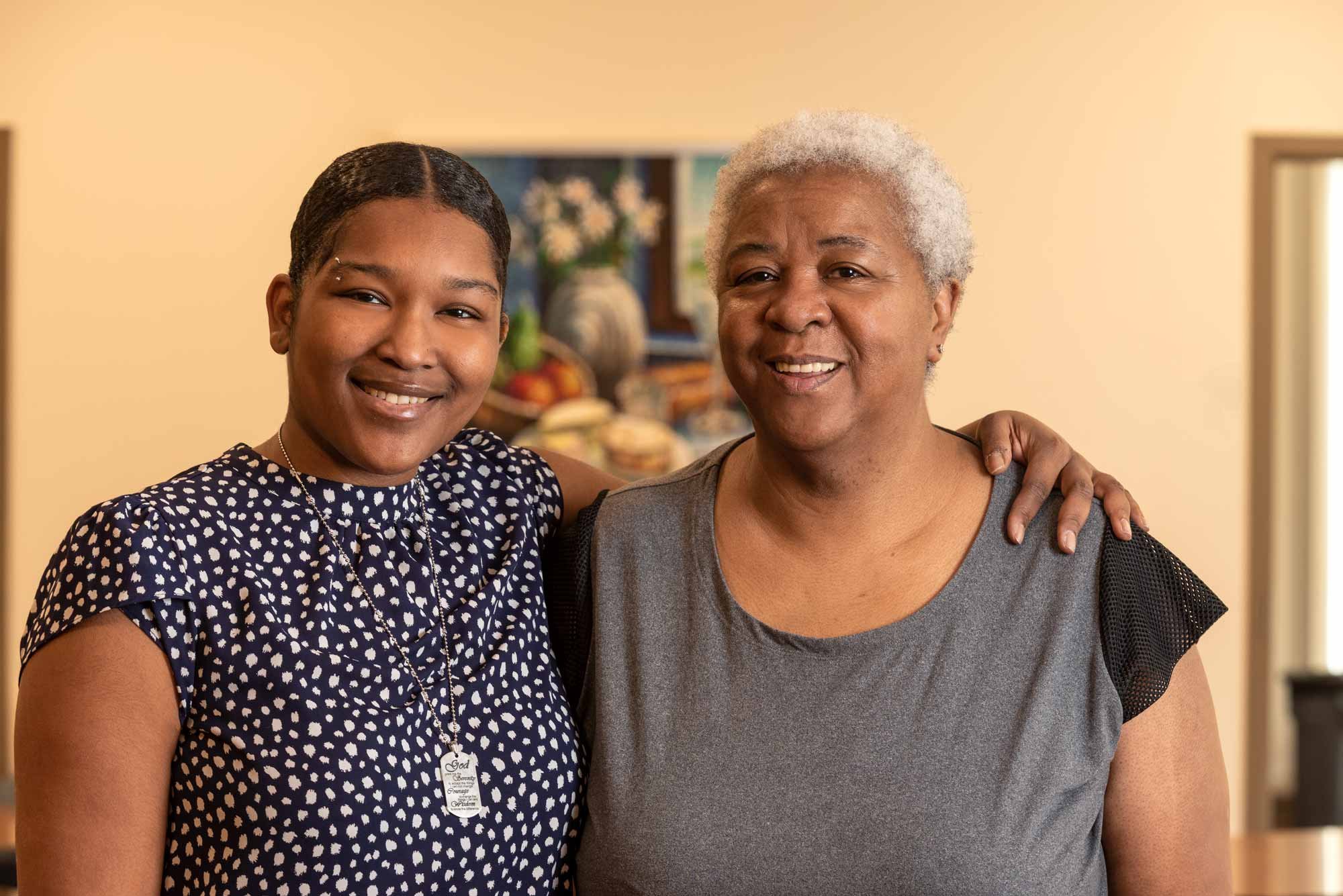 This photo of Lauren Brown and Marlowe Court resident Johnetta Key was taken in 2019.

Some donors have already given. Others plan to contribute because it’s more than a mere scholarship for books and tuition. Instead, it will give team members other help they need to receive more education or earn certifications or licensure.

For example, someone may not be able to catch two buses to connect them from their work at ERS to classes at Cincinnati State Technical and Community College.

In that case, the empowerment fund might help someone make a down payment on a car.

The ultimate goal, with the fund and in other aspects of We Can Do Better, is to remove economic blockages that exist and ask, “What can we do to help take the barriers away from someone, so they can be successful?"

Here's Laura's blog about the We Can Do Better letter she wrote two years ago.

One donor, a very accomplished white man who lives in an ERS retirement community, has explained why he’s helping.

“He’ll never forget the guy who helped him in his first job. In his case, he wasn’t African-American, and he didn’t have some of the challenges that he sees some of our staff have," Lamb said. "But he had challenges, and he wants to be super-intentional about helping our employees that had challenges that were different than he had.”

The more the Servant Leadership Team knows about team members’ career goals, the more they can think about well-placed people who can help them. For example, Why not arrange a meeting between a Deupree House team member who wants to go into finance with a local leader of that industry?

Raising $500,000 for the endowment is a big goal, but the majority of ERS line staff are BIPOC, so there are many opportunities to help team members who have been called to serve older adults grow in their lives and in their careers. And the ultimate goal is if they love elders, that they will stay with ERS.

There will be no hard feelings whatsoever if ERS team members aided by the empowerment fund eventually are working elsewhere. The problem is much larger than ERS' piece of the world, but ERS can do what it can to improve things. Besides, a team member may have the dream of being the first African-American director of the Cincinnati Zoo, and that goal can't be met at ERS.

Years from now, those former team members will always keep ERS close to their hearts.

Other discussions about disparities

In addition to We Can Do Better, Lamb has been participating in discussions called Conversations that Matter at Christ Church Cathedral in Downtown Cincinnati.

Those discussions take up the subject of racism and hate in the country and world today, walking a path similar to ERS’s We Can Do Better initiative.

Although there has been some progress in the country with racial issues, some participants noted every time the country makes progress, people who oppose that progress do something to distract everyone from that progress.

The lesson learned is that, no matter what the forum, whether it’s ERS, Christ Church Cathedral or community gatherings, we’re still going to keep the conversation going.

Here are some upcoming events that celebrate under-represented communities:

Cincinnati’s 35th annual Juneteenth Festival, commemorating the end of slavery in the United States, this year will be in Eden Park on Saturday (June 18) from noon to 9 p.m., with two stages for musical performances, a children’s fun area, historical re-enactors, other history information, art, and things to shop for. On Monday (June 20), a Juneteenth Parade will happen Downtown from 10 a.m. to 1 p.m. This site has details about the parade.

The Cincy Pride Parade will launch at 11 a.m. on June 25 (a Sunday), Downtown, beginning at 7th & Plum, proceeding down Vine Street past Fountain Square, and finishing at the Cincinnati Pride 2022 Festival at Sawyer Point & Yeatman's Cove. The Cincinnati Pride Festival happens throughout the day.

By
Kristin Davenport
Kristin Davenport is the Director of Communications for Episcopal Retirement Services (ERS). Kristin leads ERS’s efforts to share stories that delight and inspire through social media, online content, annual reports, magazines, newsletters, public relations, and events. Kristin earned her BFA in graphic design from Wittenberg University. She joined ERS in 2014 after a 25-year career as a visual journalist and creative director with American City Business Journals. Her role at ERS has ignited her passion for making Cincinnati a dementia-inclusive city, and she spends time with residents as a SAIDO® Learning lead supporter. Kristin is the executive producer and co-host of the Linkage Podcast for ERS. Kristin and her husband Alex live in Lebanon, Ohio, with their two daughters. She also serves as a Trustee and the President of the Lebanon Food Pantry and is a board member for ArtScape Lebanon, where she teaches painting and has an art studio, Indium Art.
we can do better White Privilege Lauren Brown Empowerment Fund BIPOC Laura Lamb