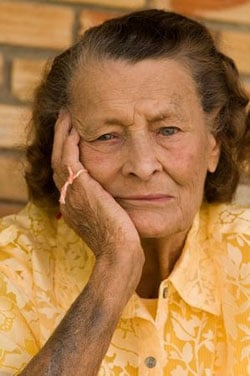 A 2014 poll conducted by the Alzheimer’s Association (following up on a 2010 poll it performed in association with The Shriver Report) found that women are more likely to feel the effects of Alzheimer's disease than men.

According to the new study, almost 2/3 of Americans living with Alzheimer’s are women.

Though experts have no solid explanation for this phenomenon, the most common supposition is that, on average, women live longer than men and so are more likely to reach the advanced ages at which Alzheimer’s risk is most prevalent.

Some see a link with heart disease.

The two conditions share risk factors, but men die more often between the ages of 45-65 from acute cardiac illnesses than women do which means that many men who would otherwise have developed Alzheimer’s are weeded out of the risk pool before the onset of obvious symptoms.

Women worry more about Alzheimer’s than men do.

Though men and women both listed Alzheimer’s as the chronic condition they were most afraid of developing, 56% of women reported they worried that they or someone in their immediate family would develop dementia compared to only 44% of men.

Moreover, women were more likely than men to report feeling “fear” of Alzheimer’s and dementia. As the report noted, this fear can lead to its own negative outcomes as it can contribute to chronic stress and anxiety and cause a person to seek unnecessary scans or take “unproven and potentially dangerous” preventative measures.

Maybe as a result of that increased concern, women are more likely than men to have given forethought to care options, in the case that they or their loved ones might develop dementia.

That may be due at least in part to many women having already having been forced, as caregivers, to consider the prospect of the illness. Women serve more often than men as long-term, informal caregivers for dementia sufferers — in the 2010 poll, 63 percent of respondents who reported serving as informal dementia care providers were women.

Though the movement in health care seems increasingly to be toward providing more advanced care in patients’ homes so that individuals can “age in place,” men and women responding to the 2014 Alzheimer’s Association / Shriver Report poll seemed to prefer assisted living over the option to receive in-home care from a paid provider.

That said, those who preferred in-home care from a loved one nearly equaled the number of individuals who preferred placement in residential nursing care/assisted-living retirement communities. But given the adverse effects that providing long-term care can have on loved ones, placement may be a more reasonable and attractive option for many families.

Though the negative effects of Alzheimer’s are obvious, the best course of action isn't always clear.

The best situation for families facing a loved one’s Alzheimer’s or dementia diagnosis is to have a plan of care, so that adequate care can be given without placing undue burdens and stresses on loved ones.

To that end, discuss with your family members your desires and care wishes in the case that you are ever diagnosed with dementia. Visit providers up front, so that if you need residential care in the future, your family members will know where you are willing to go.

There are many retirement communities and assisted living facilities in Cincinnati, including Marjorie P. Lee, that specialize in providing the effective, non-invasive memory care you could one day need.

By
Bryan Reynolds
Bryan Reynolds is the Vice President of Marketing and Public Relations for Episcopal Retirement Services (ERS). Bryan is responsible for developing and implementing ERS' digital marketing strategy, and overseeing the website, social media outlets, audio and video content and online advertising. After originally attending The Ohio State University, he graduated from the College-Conservatory of Music at the University of Cincinnati, where he earned a Bachelor of fine arts focused on electronic media. Bryan loves to share his passion for technology by assisting older adults with their computer and mobile devices. He has taught several classes within ERS communities as well as at the Osher Lifelong Learning Institute run by the University of Cincinnati. He also participates on the Technology Team at ERS to help provide direction. Bryan and his wife Krista currently reside in Lebanon, Ohio with their 5 children.
Memory Support alzheimer's and dementia mental wellness senior healthcare Mental Health Alzheimers

Are Geriatric ERs the Future of Senior Healthcare?