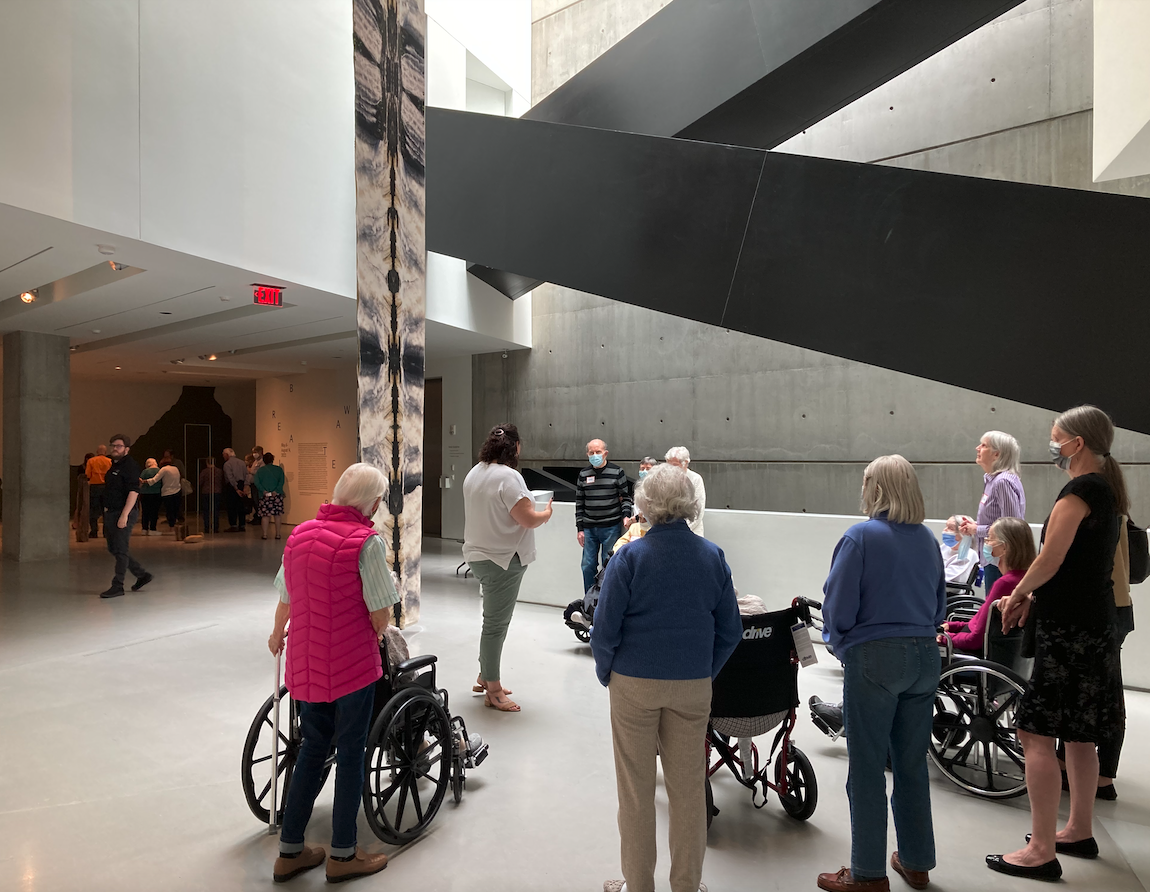 Sometimes people living with dementia and their care partners just need to get away from their everyday lives and do something relaxing that stimulates their creativity.

One such opportunity will happen Wednesday, Aug. 3, at the Contemporary Arts Center in Downtown Cincinnati. It’s a free program that lets participants see some of the CAC’s art on exhibition, and then make some of their own.

As people walk through the gallery, they stop to hear descriptions of artworks from curators trained to work with people with dementia. The art spurs discussions among the viewers, and the art-making afterward prompts smiles and laughter as imaginations take off.

The “With Art In Mind” program was developed by Shawnee Turner, interpretive learning director for the CAC, in partnership with Shannon Braun, director of Episcopal Retirement Services’ Center for Memory Support and Inclusion (CMSI).

“I love the program,” Braun said after a recent session. “I’m so grateful for CAC’s partnership.”

“With dementia comes language deficits and barriers,” she said. “And when in a creative space, I think it’s easier for people to express themselves.”

How does it help?

The program helps people with dementia in a few ways, Turner said.

“I think social inclusion is the biggest thing, the sense of community, and getting out with caregivers,” she said. That the caregivers also have socialization time “also is very nice.”

The visual arts and music are among the last functions of the brain affected by dementia and Alzheimer’s disease, “so it’s really important that we keep this kind of activity alive for as long as possible,” Turner said.

“In my experience, when people come in who have dementia, they’re able to engage with the art in very personal ways because it invokes memories and ideas in them that other people don’t see,” Turner added. “But it comes alive to them in a very important way for them.”

At one session at the CAC earlier this summer, when one woman began talking about what she saw in one abstract-art exhibit, that encouraged ideas from others, “and we started getting everybody talking about what they saw, and what they were experiencing,” Turner said. “That was really important, and special.”

Simply exercising the brain in that way helps it resist further encroachment of dementia’s effects.

Other ways it helps

After viewing some art, the group went downstairs to make creations from clay and then paint them. That helped them think in different ways about the artworks they had viewed and also let them work with their hands for enjoyable hand-eye practice.

“I have found that people who say they would never consider themselves to be artists or creative, kind-of really enjoy the art-making,” Turner said. “Because there aren’t any big rules. We have a project, but it’s not like we’re going around telling them they’re doing it wrong. They can just do whatever they want with it.”

Braun is the person to contact to register for the next session, which will happen from 10 a.m. to noon on Wednesday, Aug. 3. She can be reached at sbraun@erslife.org or 513-979-2302. Download the flier here.

Meanwhile, ERS writes blogs and has other resources for people who live with dementia and those who care for them.

For more information about coping with the effects of dementia, download our Dementia Guide or contact us. Dementia may be complicated and challenging, but we’re here to help.

By
Kristin Davenport
Kristin Davenport is the Director of Communications for Episcopal Retirement Services (ERS). Kristin leads ERS’s efforts to share stories that delight and inspire through social media, online content, annual reports, magazines, newsletters, public relations, and events. Kristin earned her BFA in graphic design from Wittenberg University. She joined ERS in 2014 after a 25-year career as a visual journalist and creative director with American City Business Journals. Her role at ERS has ignited her passion for making Cincinnati a dementia-inclusive city, and she spends time with residents as a SAIDO® Learning lead supporter. Kristin is the executive producer and co-host of the Linkage Podcast for ERS. Kristin and her husband Alex live in Lebanon, Ohio, with their two daughters. She also serves as a Trustee and the President of the Lebanon Food Pantry and is a board member for ArtScape Lebanon, where she teaches painting and has an art studio, Indium Art.
Marjorie P Lee dementia art therapy

6 Ways To Help Loved Ones Cope With Sundowning