Jay Kittenbrink is Easing into Retirement from Affordable Living by ERS

When the deal was done, and St. Paul Village became the third member of the ERS affordable living family, the CEO of ERS, Doug Spitler, sat down with Jay Kittenbrink.

Kittenbrink, a Madisonville native, had run his neighborhood’s largest retirement community for twenty-six years, with varying results. The buildings were growing old and tired. The people had stopped coming to rent the 80 efficiency units.

Kittenbrink was uneasy because it all depended on the buyer and new owner. ERS had options. Yet he offered Kittenbrink the job.

“So, you want me to work full-time, to accomplish what I haven’t been able to accomplish for the last five years?” Kittenbrink remembers asking Spitler.

“You now have Episcopal Retirement Services behind you. And you already have the knowledge and the contacts about development and HUD more than anyone here.”

“I have always looked at the work that I do at ERS and the work that I did at St. Paul when it got started, as a ministry for Christ. It has always been about his work. I’m just an instrument”

And with that, the marriage of ERS and St. Paul Village was blessed, and the future of an icon and institution known throughout Madisonville and East Side Cincinnati became imminently more secure.

Kenneth “Jay” Kittenbrink of Cincinnati has been a primary driving force at Episcopal Retirement Services (ERS) in the field of Affordable Living for Seniors ever since, providing assistance for people to live out their senior years with dignity and purpose while helping families deal with elderly parents and family members.

Soon, Jay will be transitioning into a semi-retired stage of his professional life at ERS, where his expertise has guided the growth of ERS into an industry pioneer with more than two dozen affordable housing communities in the Tri-State.

Jay’s ERS career as a Senior Development Manager has been personified by his personal brand of care, focusing on the enrichment and improvement of the lives of the elderly, and guided by his faith in Christ. On the professional front, he has spearheaded much of the current focus on Affordable Living for Seniors at ERS, securing funding, and providing expert project management for a diverse range of projects such as new construction and redevelopment of existing senior affordable living communities.

“I have always looked at the work that I do at ERS and the work that I did at St. Paul when it got started, as a ministry for Christ. It has always been about his work. I’m just an instrument,” Kittenbrink says.

Jay has played a pivotal role in helping ERS secure $158 million in total development funding for ERS Affordable Living for Seniors communities over the last decade. Currently, he assisted in applications for another $18 million for new projects in Northern Kentucky, projects that are still under review.

Mr. Kittenbrink arrived at ERS in 2008, on the heels of 25+ years at the helm of St. Paul Village in Madisonville, brought into the ERS fold in 2008. At St. Paul Village, located in his native Cincinnati neighborhood of Madisonville, Jay put his extraordinary development skills to work with the professional management of properties, the development of a new building phase, and several attempts to redevelop the older facilities. Former CEO Spitler asked him to focus on the development of new and rehabilitated communities when Jay joined ERS.

Jay followed in the footsteps of his father, Ken Kittenbrink, who developed a lifelong passion for caring for older adults. Ken Kittenbrink was on the original committee formed to build St. Paul Village, and eventually became the first manager of the community.

Jay took over his father’s position when he unexpectedly passed away in his 50s.

“Jay is the rare combination of a socially active businessman, who not 0nly strives to advance the organization of ERS, but he also toils endlessly to address the needs of low-income families,” said Jim Stary, president of New Alternatives, who worked with Mr. Kittenbrink at St. Paul Village and LeadingAge Ohio,

“In his position, he accomplishes the difficult task of identifying target markets where ERS has an opportunity to develop quality housing for low-income people.”

“Jay has a unique blend of skills, which equip him to be a powerful force in achieving corporate goals,” said Drew Dinkelacker, a finance professional who’s worked with Jay throughout their careers. “Beginning with vision, he can see what could be but does not yet exist. He is steadfast in his ability to successfully work through government bureaucracy. And finally, Jay is compassionate. I have worked with him closely in the executive suite, where difficult decisions have to be made. He has always made those decisions with a keen eye on the impact of the residents.”

Jay will be retiring with more than 35 years of experience in developing affordable housing for the elderly. Amongst his favorite tools: The FHLB Affordable Housing Program, various HUD programs, and the Low-Income Housing Tax Credits. He has been a Member of the Advisory Council at the Federal Home Loan Bank of Cincinnati for more than five years; he’s also served on the Policy Committee for the Ohio Housing Council.

As a member of the Advisory Council, Jay participated nationally in the mission to establish and preserve affordable housing for seniors, helping to set the direction of the FHLB by advising its Board and management on affordable housing and economic development needs within his district.

Jay’s education started at Concordia University and Seminary in Fort Wayne, Indiana, where he earned a B.A. in Theological Languages. He then returned to Cincinnati and received his MBA from the University of Cincinnati Carl H. Lindner College of Business.

Jay has successfully applied for both 9 percent and 4 percent LIHTC awards in Ohio, Kentucky, and Indiana. In 2012, he facilitated the acquisition of a portfolio of HUD-subsidized properties, and he’s certified as a Housing Development Finance Professional and Housing Credit Certified Professional. 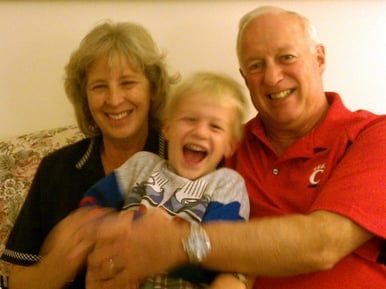 “Jay has a unique blend of skills, which equip him to be a powerful force in achieving corporate goals,” said Drew Dinkelacker, a finance professional who’s worked with Jay throughout their careers. “Beginning with vision, he can see what could be but does not yet exist. He is steadfast in his ability to successfully work through government bureaucracy. And finally, Jay is compassionate. I have worked with him closely in the executive suite, where difficult decisions have to be made. He has always made those decisions with a keen eye on the impact of the residents.”

Jay has been happily married to his wife Lana for 48 years; they have two children and six grandchildren.

“I still look forward to several days of the month, working on ERS opportunities, talking with our partners and to still help ‘be the face’ of ERS,” says Kittenbrink. “But now, I won’t have to be making the applications. I’m still going to be there for the fun stuff, the groundbreakings, the ribbon-cuttings, the celebrations of the work. With semi-retirement, I will be able to travel more, see the kids and the grandkids, play some more golf. And yes, still stay involved with ERS,” he says.

By
Kristin Davenport
Kristin Davenport is the Director of Communications for Episcopal Retirement Services (ERS). Kristin leads ERS’s efforts to share stories that delight and inspire through social media, online content, annual reports, magazines, newsletters, public relations, and events. Kristin earned her BFA in graphic design from Wittenberg University. She joined ERS after a 25-year career as a visual journalist and creative director in Cincinnati. Kristin is passionate about making Cincinnati a dementia-inclusive city. She is a Lead SAIDO Learning Supporter and a member of the ‘Refresh Your Soul’ conference planning team at ERS. Kristin and her husband Alex, live in Lebanon, Ohio with their 2 daughters. She also serves as a Trustee and the President of the Lebanon Food Pantry and is a board member for ArtScape Lebanon.
positive aging affordable living by ers

A Conversation with Refresh Your Soul Speaker Rabbi Abie Ingber