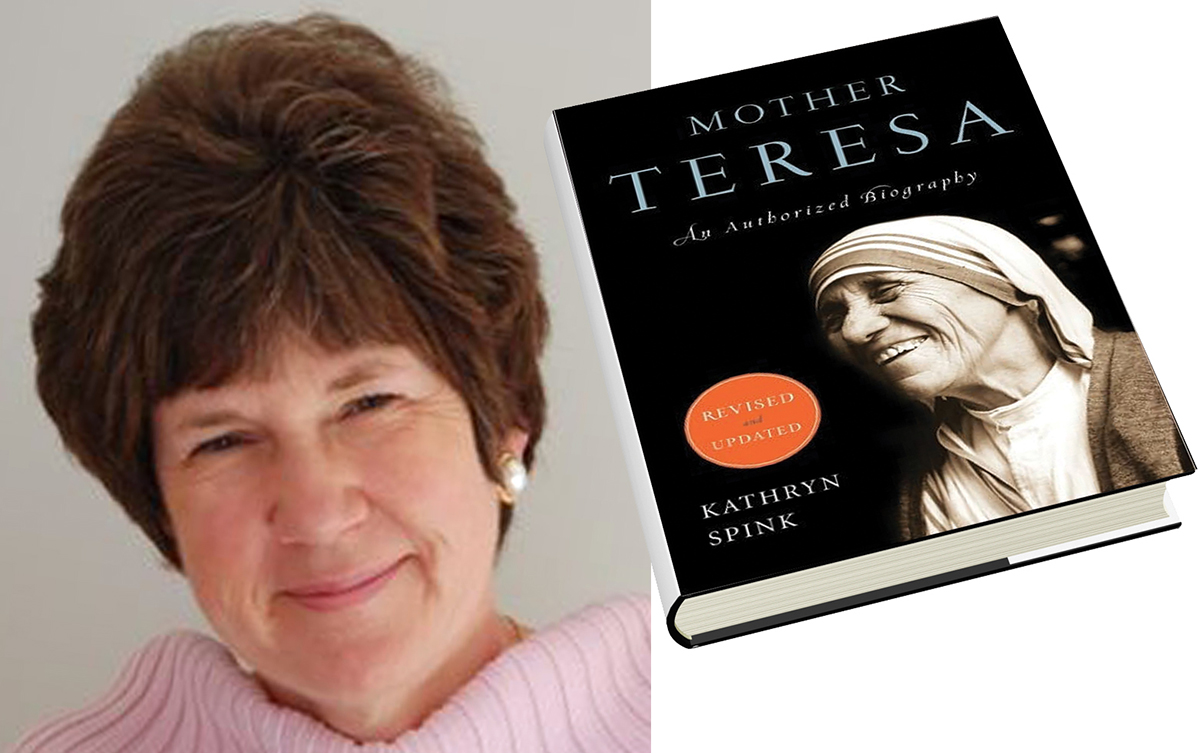 Refresh Your Soul 2019 Keynote Speaker Kathryn Spink sat down with us (virtually) and answered a few of our questions.

ERS: How are things in London?

SPINK: Very dark, and very wet, at the moment.

ERS: Is that your usual weather? That’s usually what we hear, right?

Well, not really, that’s the myth associated with London, isn’t it? November and December can be quite damp, it’s just one of those days at the moment.

ERS: When did you first have the crazy idea that you wanted to interview Mother Teresa?

SPINK: Well, it’s a very long story, but in fact I’d had some success with a book in the States published by Mayflower connected with the then-Pope, Pope John Paul II. Mayflower Books approached the company for which I was then working in London, to say, could I write anything at all on Mother Teresa? So, I contacted Malcolm Muggeridge, who was the great campaigner, in this country, certainly, for Mother Teresa at that time, and he said I must go and see Ann Blaikie, who was the first prominent lay person to work with Mother Teresa in Calcutta, and who was, at this time, living in Surrey, which is not very far where I was working, and where I live.

So I went to see Ann, and in an old tin trunk in her house, she showed me all the unofficial archives of the early days of Mother Teresa …. And the beginning of the Missionaries of Charity, her congregation. So I said I would love to write about this, and she said, "Well, ring Mother Teresa, and ask her permission, and you can have access to all this material."

SPINK: Yes! Just like that! As you do! (laughs) So, I sat up for three nights, trying to get hold of the Mother House in Calcutta, and on the third night, Mother Teresa answered the telephone herself. And, we proceeded to have a slightly heated and irritable conversation, on my part, because I had lost so much sleep over the previous two nights, waiting to catch her. I presumed to argue, and MT said, "There has been one book, there is no real need for another." But I think, not wanting to be unkind to me, she said "But I’m coming to London in a few weeks’ time, I’ll see you then."

So, that was my first meeting with Mother Teresa, which would have been in 1980. And, we met in the Sisters’ very humble house in south London, and for some reason then, she said yes I could write, but at that stage it would be about her international mission, and primarily about the co-workers of Mother Teresa, the lay helpers who were really working alongside the Sisters throughout the world, and she didn’t want it to focus on Calcutta. So that was the beginning of my relationship with her. And, I’m afraid, that once you were under Mother Teresa’s wing, you were never really released, which was a great privilege for me, but also quite demanding at times.

ERS: When did you realize you were in the company of a Saint?

SPINK: Well I think, almost immediately. I think what struck me, when I first went into the Sisters’ house, I was ushered into what was their chapel, and told to wait there, until Mother Teresa came. And, after about 10 minutes, I suddenly realized that the little figure kneeling, on the far side of the room, was in fact Mother Teresa herself. And there was something about the sheer intensity of her devotion, the emptiness of ego. There was no sense of there being a powerful presence, at all. And I hadn’t even noticed her. There's something about that, that really struck me. I don’t think I have ever encountered that lack of ego anywhere else, really.

ERS: Did you grow up any particular denomination, in terms of your faith?

SPINK: Yes. I am a vicar’s daughter. My parents were missionaries in India, and my father was chaplain to the British Embassies in a number of countries, and eventually a Canon in Coventry Cathedral. So yes, I was bought up in the Anglican tradition, not a Roman Catholic, but essentially I had a Christian upbringing.

ERS: In terms of the overall experience, has it changed you?

SPINK: It certainly made me more aware of the full nature of poverty. I think I had always thought of poverty in terms of physical deprivation in India, mainly because I know something about India. But I had never really seen poverty as loneliness, the lack of faith, neglect, the kind of poverty that Mother Teresa identified in the Western World.

ERS: Have you kept in touch with the Missionary Sisters?

SPINK: Yes, I am in touch with them. My husband and I help to maintain a home for children with leprosy on the outskirts of Calcutta, so I do go back to Calcutta in intervals, and always make a point of calling in there. I also know some of the Sisters here in London.

ERS: From a writer’s perspective, what do you do for an encore?

SPINK: (laughs) Not at all sure, actually. I have done a number of books since, but obviously, it’s the biography of Mother Teresa that tends to attract the most attention, particularly in the States.

SPINK: She had a very broken English actually, even after all those years, almost the sing-song of the Indian accent. But ….. she was a listener more than a talker. That much I would say. She would enjoy talking to groups of people, when she thought she had a relevant spiritual message to convey, but normally, just very softly spoken. And, as I say, somebody who gave their total attention to whatever anybody else was saying.

SPINK: I have been to Ohio before, but I have never been Cincinnati, and I look forward to it.

ERS: What can the people of Cincinnati learn from you at Refresh Your Soul 2018?

SPINK: Well, I think, that is probably doing small things with great love, which would have been the message Mother Teresa would have wanted to convey to anyone who has, shall we say, "a calling" to care for others.

Tickets are now sold-out to see her in person on March 18, 2019 at Refresh Your Soul 2019 — Living Well with Purpose. Visit refreshyoursoulconference.com for information or to be added to our waitlist.

By
Kristin Davenport
Kristin Davenport is the Director of Communications for Episcopal Retirement Services (ERS). Kristin leads ERS’s efforts to share stories that delight and inspire through social media, online content, annual reports, magazines, newsletters, public relations, and events. Kristin earned her BFA in graphic design from Wittenberg University. She joined ERS in 2014 after a 25-year career as a visual journalist and creative director with American City Business Journals. Her role at ERS has ignited her passion for making Cincinnati a dementia-inclusive city, and she spends time with residents as a SAIDO® Learning lead supporter. Kristin is the executive producer and co-host of the Linkage Podcast for ERS. Kristin and her husband Alex live in Lebanon, Ohio, with their two daughters. She also serves as a Trustee and the President of the Lebanon Food Pantry and is a board member for ArtScape Lebanon, where she teaches painting and has an art studio, Indium Art.
Refresh Your Soul positive aging

Jay Kittenbrink is Easing into Retirement from Affordable Living by ERS