Why You Should Consider a Nursing Car...

What Are the Main Causes of Memory Lo...

10 Tips for Improving Your Relationsh... 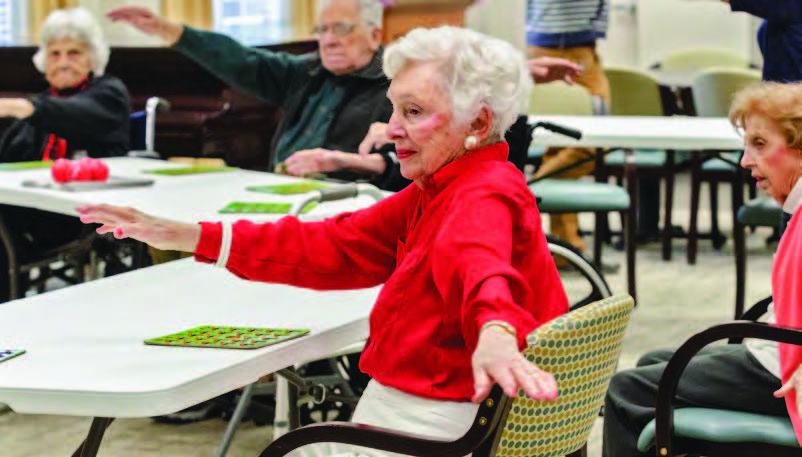 Seniors playing bingo is a common stereotype of retirement communities. But here at Episcopal Church Home senior living community in Louisville, we do bingo a little bit differently.

Twice a week, ECH residents participate in a program called Bingocize®, which strategically integrates exercise and health education into a fun game of bingo regardless of participants’ background, physical or intellectual abilities.

The goal of the program is not only to help reduce falls and improve overall physical and cognitive health but also to help seniors build relationships with each other and with students from Spalding University who help facilitate the program.

In 2011, Crandall was working with students at another school on an exercise class for older adults, but it failed to attract a single participant.

“We discovered that nobody showed up because everybody was down the hall playing bingo,” Crandall says. “That’s when it hit me. If you can’t beat ’em, join ’em.”

That’s how Bingocize was born, and within a week, the class had 15 participants. Now, Crandall’s team has successfully implemented the program at 12 additional personal care and independent living facilities in Bowling Green and Owensboro, Kentucky.

WKU has received multiple grant awards from organizations dedicated to improving the quality of care delivered to individuals living in senior living communities including the Kentucky Science and Engineering Foundation, the Retirement Research Foundation, and the U.S. Department of Health and Human Services. 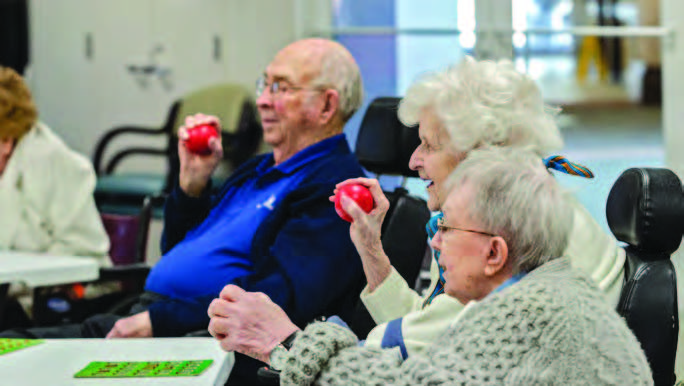 Bingocize facilitators encourage residents to do a series of exercises such as seated leg extensions, head turns, and hand exercises for general range of motion, flexibility and strength. Graham and other ECH staff then record the progress of Bingocize participants.

Falls says the overall goal is to improve residents’ quality of life. Exercise and movement, particularly the interruption of gameplay, challenges participants on a physical and cognitive level, he says.

“Exercise is one of the few things that we know can improve global cognition,” Falls says.

Research has confirmed the many benefits from Bingocize, including:

Crandall notes that the increased social engagement for residents is essential in warding off loneliness and depression. Crandall and his team have published studies demonstrating the many benefits of Bingocize in publications including the International Journal of Exercise Science and in Gerontology and Geriatric Medicine.

And when students are involved with Bingocize, there’s intergenerational bonus as well.  Students who have had little contact with older adults are eased into the environment in a fun way, “bridging the gap for people who may be apprehensive or timid to come into a care center,” Falls explains.

ECH has also incorporated Bingocize into its mentor program, which further encourages students and residents to build relationships, Graham says.

“We have had students who...continue to come here and keep that relationship with those residents,” she says. “That in itself is awesome.”

By
Kristin Davenport
Kristin Davenport is the Director of Communications for Episcopal Retirement Services (ERS). Kristin leads ERS’s efforts to share stories that delight and inspire through social media, online content, annual reports, magazines, newsletters, public relations, and events. Kristin earned her BFA in graphic design from Wittenberg University. She joined ERS after a 25-year career as a visual journalist and creative director in Cincinnati. Kristin is passionate about making Cincinnati a dementia-inclusive city. She is a Lead SAIDO Learning Supporter and a member of the ‘Refresh Your Soul’ conference planning team at ERS. Kristin and her husband Alex, live in Lebanon, Ohio with their 2 daughters. She also serves as a Trustee and the President of the Lebanon Food Pantry and is a board member for ArtScape Lebanon.
senior health Episcopal Church Home Louisville Senior Living bingocize

Feeling Guilty for Moving Mom Into Memory Care? Use These Coping Strategies