What Are the Different Stages of Dementia?

What Are the Different Stages of Dementia?

It's Never Too Early to Screen for Al...

How Dementia Caregivers Can Take Care...

The Connection Between a Healthy Diet... 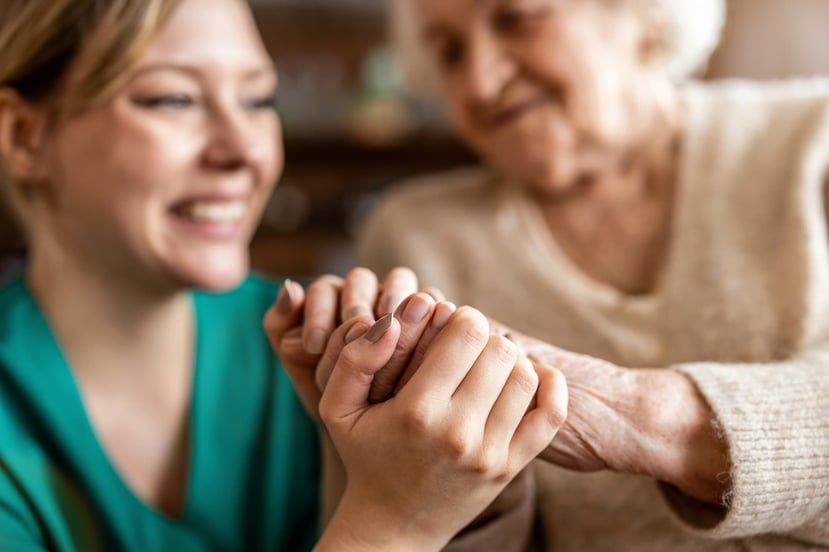 Alzheimer's disease and other forms of dementia aren’t always interchangeable. Lewy body dementia, for example, can cause hallucinations in some people, while others with Alzheimer’s may not.

But in the progression, many forms of dementia share the same stages. Recognizing where the person you love seems to be in their journey with dementia can help you understand the level of care they currently need and what they are likely to need in the near future.

The early stages of dementia can be difficult to identify. Some symptoms are interchangeable with how scattered many of us feel when life turns a bit harried. For that reason, it’s important not to panic if your mind goes blank from time to time or you notice an occasional “blank out” in a loved one.

But if you sense a pattern emerging, a visit to a physician can help you or your loved one understand if there might be a reason to begin treatment to help slow cognitive loss.

People in the early stages of Alzheimer's disease often misplace items — sometimes crucial ones, like car keys or an important document. Other memory problems people with dementia experience include forgetting information they've just looked up, the name of someone they’d recently been introduced to, or the right word for a familiar object.

In addition, people in the early stages of Alzheimer's disease or dementia may notice they’re not as proficient with mental tasks as they once were. For example, if someone once well-known for her planning skills has trouble keeping things organized these days, it’s possibly an early sign of dementia. Similarly, having difficulty carrying out tasks that involve more than one or two steps can also be an early sign of some form of cognitive loss.

As worrying as a diagnosis of Alzheimer's disease or other dementia disorders may be, early confirmation can have many silver linings. It gives affected people time to make decisions about their future. It also allows them a head start in making changes in their wellness regime, including eating healthier and staying active. They can also begin different forms of cognitive and memory care therapies.

By the middle stages of dementia or Alzheimer's disease, cognitive loss is more easily identifiable. For example, in the case of Alzheimer's, the nerve cell damage in the brain that is associated with the disease becomes more pronounced. This interim stage of dementia may last several years before worsening significantly.

During the middle stage, people may go from not remembering names and random facts to forgetting elements of their own history. They may not recall where they used to work or even their - address. Getting lost is also a more regular occurrence. At times, a person with middle-stage Alzheimer's might suddenly “come to” and not know how they got there or where they left their car.

Dementia can also impact the personality of the person living with it. Especially in social situations or hectic environments, the person may get irritable, moody or simply “check out.” They may also start expressing thoughts that strike others as paranoid or begin compulsively talking about ideas that seem delusional.

New habits will also emerge. They may take to shredding bits of paper or wringing their hands. Sleeping less at night and more during the daytime becomes more common, as may dressing inappropriately for the weather or occasion or not always make it to the bathroom on time.

Unfortunately, the last stages of dementia tend to be the most severe. There will be many times in which the person won’t recognize his or her loved ones or understand where they themselves are. Walking and other movements become difficult, as does talking.

Eventually, swallowing will be a challenge, and there will be an increased risk of serious health issues such as pneumonia. Not surprisingly, this stage of life requires constant care to help with dressing, bathroom needs, eating, and taking medicine.

Unfortunately, the days involving the very late stages of Alzheimer's disease and other dementia forms are mostly spent in bed. But even if your loved one can’t always know who you are or where they are, they’ll still be soothed by your loving touch, as well as enjoy familiar music and other comfort items.

Talking to Your Loved Ones About Options

Discussing the best treatment plans for your spouse, parent or friend can be a difficult step. If possible, ask to set up an appointment with her doctor which you can also attend. This will help you determine what, if any, stage of dementia they may be currently experiencing. The doctor may also have some recommended treatment approaches for the near future.

If it’s time to consider professional memory care within a retirement community, the team at Marjorie P. Lee would be happy to answer any questions you and your family members may have. Together, we can find the best solution for your family. Contact us today to learn more.

By
Kristin Davenport
Kristin Davenport is the Director of Communications for Episcopal Retirement Services (ERS). Kristin leads ERS’s efforts to share stories that delight and inspire through social media, online content, annual reports, magazines, newsletters, public relations, and events. Kristin earned her BFA in graphic design from Wittenberg University. She joined ERS in 2014 after a 25-year career as a visual journalist and creative director with American City Business Journals. Her role at ERS has ignited her passion for making Cincinnati a dementia-inclusive city, and she spends time with residents as a SAIDO® Learning lead supporter. Kristin is the executive producer and co-host of the Linkage Podcast for ERS. Kristin and her husband Alex live in Lebanon, Ohio, with their two daughters. She also serves as a Trustee and the President of the Lebanon Food Pantry and is a board member for ArtScape Lebanon, where she teaches painting and has an art studio, Indium Art.
dementia memory care