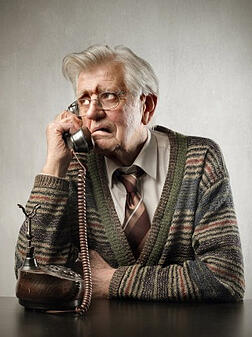 We've all seen re-runs of Lassie.

There's trouble on the farm—Timmy's hurt. The heroic collie warns the family, and a well-placed ring from Mrs. Martin to Jenny the telephone operator brings the doctor and saves the day.

Over the past century, the land-based phone line has served as a primary avenue for communication and, in emergencies, a lifeline. Even in blackouts, landlines could be counted on to work; they carry their own electricity and are thus independent of the normal power grid. They were simple to operate and familiar.

Now, though, they're starting to go the way of black-and-white TV.

For seniors living in retirement communities with staff support, this may not seem like a pressing problem, but the risks of technological unfamiliarity can be great for a senior living alone.

In an October New York Times article, Edward Wyatt reported on one East Coast town facing a complete shutdown of its landline system.

Flooding from Hurricane Sandy destroyed the copper wiring upon which landline service depended in Matoloking, New Jersey. In the aftermath of the storm, the phone provider in the area (Verizon) determined that it would not be cost-effective to replace the copper wires, so they re-established service to the island with a wireless VoIP system.

There's just one problem: VoIP is not independently powered.

When the lights are out, a VoIP phone will not work, nor would a fiber optics-based landline system, which companies providing landline service are increasingly substituting for older copper wires. This has caused some controversy among Matoloking's residents—particularly for seniors who now feel less secure.

Unfortunately, Matoloking seems to represent an early example of a growing trend that could spread right here to Cincinnati.

Knowing how to operate a cell phone could mean the difference between life or death in an emergency.

Phone providers have started to phase out traditional landline service as they scrambling to maintain profitability in a cell phone-saturated market.

Many older Americans with chronic conditions that can suddenly escalate—heart disease, diabetes, dementia or reduced mobility—are dependent on phone-based medical monitoring services. Some even rely on electricity for necessary treatments like refrigerated medications or to power medical devices.

This makes seniors particularly vulnerable in widespread disasters and power outages—like the one Hurricane Ike caused throughout Cincinnati in 2008—especially if they do not have, or cannot operate, a cell phone.

While cellular phone networks have their shortcomings, loss of power isn’t one of them. Most cellular towers have emergency backup generators and will continue to operate in widespread blackouts. Having a cell phone that you know how to use can provide a vital way to contact emergency services during a disaster.

Seniors are just as able to learn new technologies as younger people.

Learning how to operate a new technology can seem daunting. If a person has kept up-to-date over the years, there may have been several intervening technologies upon which the latest gadget is based. The vast majority of seniors could probably pick up the basics of standard cell phone operation with minimal practice—it is, after all, based on the traditional push-button telephone.

But the flip phone is also now being phased out of the market as more people opt for more technologically sophisticated smart phones. Seniors must now understand how to operate a touch screen computer and navigate the graphic user interface just to be able to dial or answer a call!

There are traditional barriers to senior citizens' adoption of new tech:

Learning the new technology is not impossible, however.

Many colleges and community organizations offer inexpensive, or even free, lifelong learning programs for seniors. Contact the AARP, or local senior advocacy organizations, to see what programs may be available in your area.

Community centers often offer computer training classes, as do some retirement communities. You might even ask your grandchildren to help; kids are often eager to show their elders what they know, and you'll both enjoy time spent together!

By
Bryan Reynolds
Bryan Reynolds is the Vice President of Marketing and Public Relations for Episcopal Retirement Services (ERS). Bryan is responsible for developing and implementing ERS' digital marketing strategy, and overseeing the website, social media outlets, audio and video content and online advertising. After originally attending The Ohio State University, he graduated from the College-Conservatory of Music at the University of Cincinnati, where he earned a Bachelor of fine arts focused on electronic media. Bryan loves to share his passion for technology by assisting older adults with their computer and mobile devices. He has taught several classes within ERS communities as well as at the Osher Lifelong Learning Institute run by the University of Cincinnati. He also participates on the Technology Team at ERS to help provide direction. Bryan and his wife Krista currently reside in Lebanon, Ohio with their 5 children.
Technology Senior Life senior living