Socialization comes easily when you live in a community of like-minded people, but it can be hard to know that you’re going to live well in a community without actually living there.

That’s where some of the “stuff” comes in.

It’s All Fun and Games 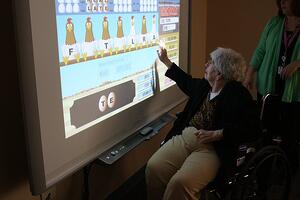 Although it’s difficult for many of us to imagine, senior adults, especially those in their 70s and older, didn’t grow up with the kind of computer technology that has become an everyday part of our lives.

But that’s starting to change. Software companies are beginning to create technology that is made specifically for an older audience.

One such system now being used at Marjorie P. Lee is called It’s Never 2 Late, a fully interactive software developed by a Colorado-based company with the motto “dignity through technology”—a fitting complement to our own philosophy of seeing residents live well into the future.

“We often get comments from this generation that they never used computers and don’t see any reason to learn. There is a fear of technology,” explains Craig White, who has been Director of Rehab at Marjorie P. Lee since 2001. “We ask them to try this system, and they immediately realize, ‘Hey, this is pretty fun.’”

But IN2L is about more than helping older adults get comfortable with technology.

The system has dozens of therapeutic applications that have been helping older adults at Marjorie P. Lee live better. IN2L is helping residents improve their eye-hand coordination, aiding stroke victims regain their balance, and engaging older adults with dementia by using memory programs and trivia games.

It’s been particularly beneficial as a memory support tool for residents with Alzheimer’s and dementia. The system has a wealth of games that have been helping older adults reclaim their brain health.

From geography and sports trivia to basic memory and word games—whatever kind of activity that a resident likes can become a memory support tool with IN2L.

Back in the Skies and Flying High

For one resident in particular—a former pilot with significantly advanced dementia—it has been a crucial way to get him involved and engaged in therapy sessions, thanks to IN2L’s flight simulator.

“We struggled with therapy to get him to participate,” White says. “Now he’s been coming down to fly that plane for an hour and a half at a time.”

In fact, the initial program has been so successful in helping our residents live happier and healthier lives, that ERH is looking to start using IN2L therapy at the Deupree Cottages skilled nursing facility, too.

Image credit to It's Never Too Late Facebook Page

By
Bryan Reynolds
Bryan Reynolds is the Vice President of Marketing and Public Relations for Episcopal Retirement Services (ERS). Bryan is responsible for developing and implementing ERS' digital marketing strategy, and overseeing the website, social media outlets, audio and video content and online advertising. After originally attending The Ohio State University, he graduated from the College-Conservatory of Music at the University of Cincinnati, where he earned a Bachelor of fine arts focused on electronic media. Bryan loves to share his passion for technology by assisting older adults with their computer and mobile devices. He has taught several classes within ERS communities as well as at the Osher Lifelong Learning Institute run by the University of Cincinnati. He also participates on the Technology Team at ERS to help provide direction. Bryan and his wife Krista currently reside in Lebanon, Ohio with their 5 children.
activities for seniors Memory Support mental wellness lifelong learning Mental Health

Marjorie P. Lee Gets to the Heart of Community Living