There May Be a New Health Menace for Older Men 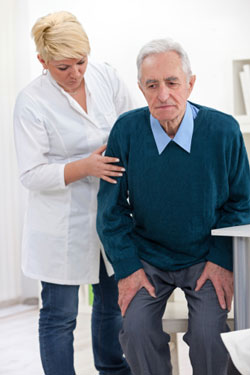 Older men may be surprised to learn they have a particularly menacing health risk to worry about in atrial fibrillation (commonly known as AFib).

While AFib has long been known to be connected to high blood pressure, there is now mounting evidence that atrial fibrillation may cause heart attack and even stroke. In light of these risks, it is important that older men and those who provide assisted care understand the signs and potential consequences of atrial fibrillations.

While atrial fibrillation is a new concept for many newly minted seniors, it has been causing health problems in men for generations.

According to Harvard Medical School, the first documented case AFib occurred in China about 4,000 years ago, and this cardiac condition still poses a problem for older men today, despite the improvements of modern medicine.

A healthy heart usually beats about 60 to 100 times per minute, to ensure maximum efficiency of blood flow, with all four heart chambers pumping a predetermine quantity of blood at the exact right time.

In AFib, on the other hand, the heart beats very rapidly at an irregular pace in the left and right atrium (the top two chambers). Your pulse skyrockets to 350 to 500 beats per minute, and your heart loses its ability to pump blood efficiently.

Atrial fibrillation makes the heart look like a quivering bowl of gelatin instead of strong, well-coordinated muscle. The fibrillating heart pumps blood about as well as a bowl of gelatin, too, causing poor blood flow to the brain, which may result in stroke, and poor blood circulation to the heart, leading to heart attack.

In fact, the American Heart Association says that you are five times more likely to suffer a stroke if you have atrial fibrillation.

Many people with AFib experience no symptoms at all, but when symptoms do occur, they may include:

Fortunately, there is hope for men and women with AFib. Medications, like beta blockers and calcium-channel blockers, can help regular heartbeats in almost all people with AFib. And, in serious cases, electroshock quickly converts atrial fibrillation to a normal rhythm.

How common is it?

AFib is the most common type of irregular heartbeat which occurs about 50 percent more often in men than in women.

By University of Iowa Health Care estimates, about 2.2 million people in the United States have atrial fibrillation, but Harvard says the number of people already with the disease could be as high as 5.1 million as atrial fibrillation is becoming more common— doctors see about 150,000 new cases each year.

The Cost of Atrial Fibrillation

The consequences—both health and financial— associated with AFib are enormous and can be devastating to a man and his family.

AFib is a common cause of stroke in older people— about one-third of all strokes occurring in people over the age of 75. In addition to these very real and very serious health risks, atrial fibrillation causes about 400,000 hospital admissions, 5 million visits to doctor offices every year.  The associated costs of this care— including assisted living services—amount to more than $6.5 billion.

According to the American College of Cardiology, women with the condition tend to experience more severe symptoms, men with are at greater risk of dying from AFib. Because of this gender difference, the group suggests different treatment goals for male and female patients: reduce symptoms in women and decrease the risk for death in men.

By
Bryan Reynolds
Bryan Reynolds is the Vice President of Marketing and Public Relations for Episcopal Retirement Services (ERS). Bryan is responsible for developing and implementing ERS' digital marketing strategy, and overseeing the website, social media outlets, audio and video content and online advertising. After originally attending The Ohio State University, he graduated from the College-Conservatory of Music at the University of Cincinnati, where he earned a Bachelor of fine arts focused on electronic media. Bryan loves to share his passion for technology by assisting older adults with their computer and mobile devices. He has taught several classes within ERS communities as well as at the Osher Lifelong Learning Institute run by the University of Cincinnati. He also participates on the Technology Team at ERS to help provide direction. Bryan and his wife Krista currently reside in Lebanon, Ohio with their 5 children.
Preventative Care senior healthcare senior care senior health health tips for seniors

Don't Downgrade When You Downsize Your Senior Housing