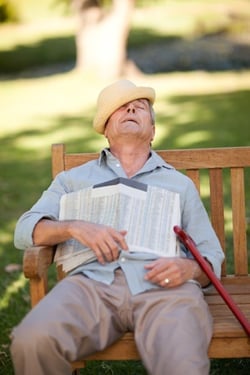 Lack of sleep is often viewed as a side effect of other health problems, but sleeplessness can be a serious concern in itself. Whether you’re struggling with a bout of insomnia or painful arthritis flare ups are keeping you from getting shut eye, lack of sleep can directly impact your health in a frightful number of ways.

While some of the more common side effects of sleep deprivation are fairly well-known– grogginess, slower reflexes, irritability–recent studies are showing just how much of a negative impact lack of sleep can have. From those everyday annoyances to lasting effects that can disrupt, damage, and your health in the long run, we’re finding out that getting the right amount of sleep means more to than just waking up, feeling refreshed each morning.

Sleeplessness might even be contributing to some of your current health problems.

There are plenty of reasons that seniors aren’t getting enough sleep. You might be kept up at night by insomnia, side effects of your medications or medical problems, or maybe you’re just too restless to fall asleep at night. Whatever the cause, your lack of shut eye can add a deeper risk for some very serious health issues.

Senior life is already greatly affected by an ever increasing risk for these common health problems, but sleep deprivation has been shown to exacerbate these already volatile issues. Anyone of these conditions on its own would be cause for concern, but lack of sleep adds an extra edge to to their severity.

A sedentary lifestyle already puts seniors at risk for weight gain, but if you aren’t getting at least seven hours a night, you’re compounding the problem. It’s been shown that lack of sleep can lead to increased appetite and even actual cravings for less than healthy foods, which only increases weight gain as it’s left unchecked.

If you’re no stranger to restless nights, you’ve probably gotten used to feeling groggy and a little bit slow of the mark– but you may not realize that the nights you’ve spent tossing and turning may be contributed to even more serious cognitive decline. Research has shown that certain important functions related to memory and memory maintenance take place during sleep which means that not getting enough sleep can greatly affect your cognitive ability. Bouts of forgetfulness increase as attentiveness, alertness, concentration, and reasoning and problem solving become much more difficult to maintain.

Over time, sleep deprivation can contribute to depression and anxiety in major ways. Insomnia has been directly linked to depression in some cases, typically considered a major warnings sign before diagnosis is sought. Unfortunately, these two feed off of each other, in turn aggravating each issue exponentially. Coincidentally, treating either of these issues tends to help relieve the other.

It’s not instantaneous, but lack of sleep over time– in the case of several studies conducted, losing just a couple of hours of sleep from normal sleeping patterns – can lead to an increased risk of mortality from major health issues. While risk is heightened across the board, decrease in sleep has been documented as doubling mortality rates among older adults with the various forms of cardiovascular problems.

It can be difficult to find balance between finding time to enjoy life after retirement and work on improving your health. But taking steps toward a healthier lifestyle— like getting more exercise or eating a well-balanced diet— could help improve the quality and quantity of sleep you get and make all the difference in the quality of senior life.

By
Bryan Reynolds
Bryan Reynolds is the Vice President of Marketing and Public Relations for Episcopal Retirement Services (ERS). Bryan is responsible for developing and implementing ERS' digital marketing strategy, and overseeing the website, social media outlets, audio and video content and online advertising. After originally attending The Ohio State University, he graduated from the College-Conservatory of Music at the University of Cincinnati, where he earned a Bachelor of fine arts focused on electronic media. Bryan loves to share his passion for technology by assisting older adults with their computer and mobile devices. He has taught several classes within ERS communities as well as at the Osher Lifelong Learning Institute run by the University of Cincinnati. He also participates on the Technology Team at ERS to help provide direction. Bryan and his wife Krista currently reside in Lebanon, Ohio with their 5 children.
living well mental wellness Senior Life senior healthcare senior care senior health programs senior health health tips for seniors Mental Health

Cincinnati Retirement Communities in for a Healthcare Shakeup in 2015