For many of us, some of our favorite moments growing up were spent with our grandparents or older aunts and uncles, listening to stories of their lives and learning from their experiences. 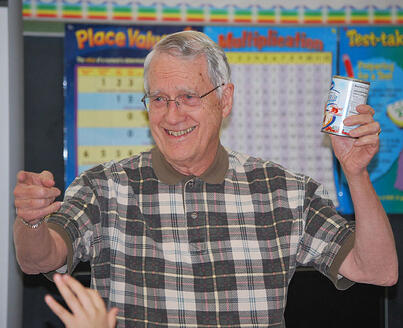 The wisdom we gained from our elders helped shape our lives.

With this in mind, residents of Cincinnati's ERH retirement communities formed the Council for Lifelong Engagement (CLLE) in 2009. The Council is dedicated to improving senior living and ending ageism by pairing elder speakers with area schools.

Through CLLE, resident volunteers are able to offer their insights into their particular expertise, from art to education to business, to classes at four Greater Cincinnati schools.

CLLE speakers share the accumulated knowledge of entire careers with students who will be starting their own.

Mrs. Gruenke's 8th grade class at Nativity School, a CLLE-partner institution in Cincinnati's Pleasant Ridge neighborhood, was studying the stock market. As part of their curriculum, the 8th graders were about to undertake a stock market project, in which they would be given a hypothetical $100,000 nest egg to invest in stocks, and their profits and losses would be tracked against real-life  prices in the exchanges.

Thomas Ottenjohn, a Deupree House resident and professional stockbroker and financial analyst before his retirement, was invited to come speak to Mrs. Gruenke's class before they began their project.

Ottenjohn related to the class the history of the stock markets from the 1970s through the present day. He talked about the importance of investing wisely in well-known products or companies and of avoiding the "irrational exuberance" inherent to market bubbles.

The students were quick to engage with him.

They asked for his advice on investments, and together, Ottenjohn and the class researched companies—using the classroom's smart board—in which they could invest.

Ottenjohn isn't alone in exciting youngsters about the future.

Many ERH residents have participated in CLLE projects, including a Career Day hosted by Nativity School, which provided opportunities for students to explore potential paths by listening to a variety of senior speakers sharing stories about their former professions.

One student, Jake, listened to speakers on careers one might expect to be interesting to a boy— football, music and art—and also to a former ear nose and throat specialist, a career he never even knew existed.

Such epiphanies are common among students who benefit from CLLE programs.

Another young man, Jordan, gained a new respect for older adults. "Most of the time I thought they were kind of crazy with all their stories," he said, "but now I realize that they have a lot of good knowledge [about] what [they were] doing and what those different jobs meant to them."

The CLLE is an award winning program.

Cincinnatians aren't the only ones taking notice of ERH residents' efforts.

The CLLE has been nationally recognized by LeadingAge for its innovative approach to improving senior citizens' community engagement.

The LeadingAge Awards are an annual series of honors for "those who have made a commitment to LeadingAge Quality First, who embody excellence in leadership, care and service innovation, and who are making outstanding contributions to their communities."

Watch the video of the award presentation here!

Senior living is rewarding when residents work together to better the community.

People often mistakenly think of retirement communities as facilities in which older people live, isolated from the world around them.

Residents of ERH retirement communities, through programs like the CLLE, are proving that this couldn't be further from the truth. In volunteering their time to share experiences, they are helping to open children's minds to the bright futures that can be had through hard work and perseverance, and in the process they are shaping better young citizens.

The elder participants benefit, too, from watching as their imparted knowledge spurs new ideas.

As one speaker remarked after a CLLE Career Day, "Their faces—the expressions, enthusiasm and bright faces they have given me so much, and I thoroughly enjoyed it."

Why You Still Need to Reassess Your Medicare Coverage