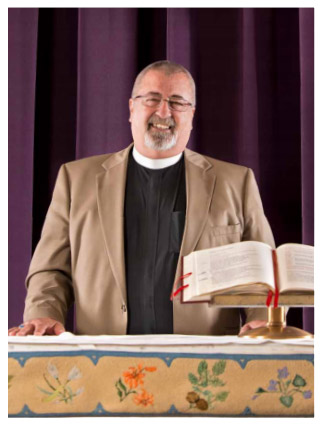 People who take part of something bigger than themselves—a ministry or cause that unselfishly seeks to help others inevitably have their eyes and hearts opened in a way that makes them want to do even more. Or maybe it’s just that selfless ministries, like the mission to bring quality senior care and housing to older Americans at every income level, attract the kind of selfless people who are wholly committed to improving the lives of others.

This past summer the ERH community said a fond farewell to one such individual—one of the greatest champions for affordable senior living in the Episcopal Church of southern Ohio.

After more than 4 decades in service to the church—the final 8 years of which were served out here at ERH—the Rev. Canon James Hanisian made the decision to formally retire from the ministry. But his heart for serving the less fortunate in southern Ohio, which has been so instrumental in the development of the ERH commitment to Person-Centered Care, won’t allow him to throw in the towel just yet.

Ever good cause needs a tireless champion who can turn a vision into reality.

And here at ERH, that champion was Jim Hanisian.

As the Vice President of Ministry and Compliance here at ERH, a position which he held from 2005 to 2013, Hanisian was one of the greatest advocates for high quality programs and services for older adults of all incomes. It was his goal to see our 8 affordable senior living communities offer services to residents that went above and beyond the cost-of-living expenses reimbursed by government subsidized health care and housing programs.

“It’s not good enough just to provide safe and sanitary housing, which is the HUD standard. We wanted to raise money for services to help our seniors do better than just survive or get by in those places,” he says.

With this goal in mind, the compliance role that Hanisian originally joined ERH to fill quickly grew into a whole department of ministry which included a new committee to manage investments.

“I learned early on that the need of an organization to receive is infinite,” he says. “But I believe in my heart that peoples’ souls have a need to give.”

He made it his business to find a way tap into the human desire to give in order to help establish quality affordable senior living that offered not just safe housing, but physical and spiritual wellness programs as well.

The department enjoyed unbridled success under Hanisian’s leadership—raising over $11 million during the 8 years that Hanisian was with our community, which included more than $100,000 every year to cover additional programming like transportation, social activities, and basic healthcare at our affordable living communities.

Helping others is never a question.

For Hanisian, he didn’t even question whether this kind of programming should be funded.

“[The lack of affordable senior housing in America] is a… national disgrace,” Hanisian states. “We are not going to be able to house the boomers. Many have not saved enough. A significant number are poor. Twenty-seven percent of our seniors in Ohio live in substandard housing now. That is only going to get worse.”

And that is a problem Hanisian finds that he can’t ignore.

Though Hanisian and his wife will be retiring to a home in Wilmington, N.C., his work with ERH is far from over. Following a short break to settle into his new life in North Carolina, he plans to return once again to his cause, acting as a special fund management and affordable living consultant to ERH.

By
Bryan Reynolds
Bryan Reynolds is the Vice President of Marketing and Public Relations for Episcopal Retirement Services (ERS). Bryan is responsible for developing and implementing ERS' digital marketing strategy, and overseeing the website, social media outlets, audio and video content and online advertising. After originally attending The Ohio State University, he graduated from the College-Conservatory of Music at the University of Cincinnati, where he earned a Bachelor of fine arts focused on electronic media. Bryan loves to share his passion for technology by assisting older adults with their computer and mobile devices. He has taught several classes within ERS communities as well as at the Osher Lifelong Learning Institute run by the University of Cincinnati. He also participates on the Technology Team at ERS to help provide direction. Bryan and his wife Krista currently reside in Lebanon, Ohio with their 5 children.
affordable senior living Leadership Cincinnati