The Nation Celebrates Senior Life in May

The Nation Celebrates Senior Life in May 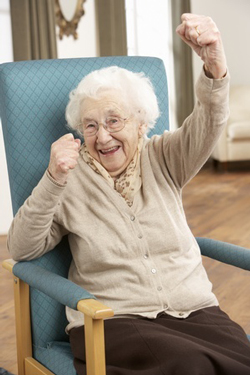 In the United States, May is Older Americans Month — a month that has been officially designated as a time for the nation to recognize the many contributions made to the country by our senior citizens, and especially by our veterans.

Older Americans Month is a celebration of senior life and a time for reflecting on the enrichment that seniors’ accomplishments have provided to our individual communities—and our nation.

The History of Older Americans Month

In the early 20th century, there were few social service programs specifically geared to address the needs of older people. At the time, more than 17 million Americans were age 65 or older and perhaps as many as one third of them were living in poverty. But in 1963, President John F. Kennedy led an outreach that spawned federal legislation to address the situation.

In April of 1963, President Kennedy met with the National Council of Senior Citizens in order to hear more about the issues that seniors often faced and see if American communities could do more to support our elderly members.

Following that meeting, Kennedy issued a proclamation that declared May, 1963 as “Senior Citizens Month”— beginning a tradition that would inspire Congress to pass the Older Americans Act in 1965.

This law authorized federal funding to the states, in the form of grants, to underwrite community-based senior services. These programs included community planning for care of the aged, specialized training for social service providers and ongoing research projects in the field of geriatric studies. The legislation also created a new bureau, the US Administration on Aging (AoA), to oversee implementation of the act and to continue to serve seniors’ ongoing needs.

After that initial Seniors Citizens Month, every president has followed Kennedy’s example, issuing annual proclamations that the United States recognizes seniors’ accomplishments in May. In 1980, President Jimmy Carter renamed it “Older Americans Month,” reflecting not only passage of the landmark act, but also the view that important national contributions are also made by Americans of middle age, and that many in this age group have unaddressed needs that dovetail with those of retirees.

In Ohio, the state Department of Aging has celebrated Older Americans Month with themed events, lectures and programs every year since 1977. Each year, a new theme is announced — typically, they align closely with the AoA’s recommended nationwide theme.

In 2014, the national theme during Older Americans Month will be, “Safe Today. Healthy Tomorrow,” which focuses on senior safety and injury prevention, “to encourage older adults to protect themselves and remain active and independent for as long as possible.”

In accordance with this focus, the AoA issued an activity guide and a senior safety guide, both available as downloadable PDFs. Ohio has also adopted “Safe Today. Healthy Tomorrow” as its statewide theme in 2014.

This year, the administration will also be engaging the public with a social media campaign via its Facebook page and its @AoAgov Twitter handle. To help raise awareness, it is recommending seniors and social service providers post pictures and information from their Older Americans Month-themed events or discuss senior safety topics under the hashtag #OAM2014.

By promoting Older Americans Month, the US Administration on Aging and the Ohio Department of Aging hope to improve the public’s awareness of the seriousness of providing for seniors’ safety needs and to show that senior life is fulfilling and rewarding.

This May, celebrate Older Americans Month by promoting senior health and safety, and by reaching out to seniors in your community. Together, we can improve seniors’ lives and celebrate the richness of their accomplishments.

By
Bryan Reynolds
Bryan Reynolds is the Vice President of Marketing and Public Relations for Episcopal Retirement Services (ERS). Bryan is responsible for developing and implementing ERS' digital marketing strategy, and overseeing the website, social media outlets, audio and video content and online advertising. After originally attending The Ohio State University, he graduated from the College-Conservatory of Music at the University of Cincinnati, where he earned a Bachelor of fine arts focused on electronic media. Bryan loves to share his passion for technology by assisting older adults with their computer and mobile devices. He has taught several classes within ERS communities as well as at the Osher Lifelong Learning Institute run by the University of Cincinnati. He also participates on the Technology Team at ERS to help provide direction. Bryan and his wife Krista currently reside in Lebanon, Ohio with their 5 children.
life after retirement Older Americans Month Senior Life senior living

These Cincinnati Communities Have Something Others Don't