Senior Healthcare: the Sad Story of a Generation of Smokers

Senior Healthcare: the Sad Story of a Generation of Smokers

How Improv Training Can Help Caregive... 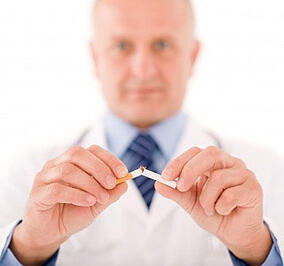 As many of you are no doubt aware, this month ushers in a season of lung health observances— November is both COPD and lung cancer awareness month, and the American Cancer Society’s “Great American Smokeout” falls on the 21st.

It’s a prime time to quit smoking—an unhealthy habit that isn’t just a concern for the young.

The History of Smoking in America

For generations, smoking was viewed as a harmless (or even, in the earliest days, healthful) habit.

A few decades ago, the current generation of older adults were some of the heaviest smokers of any generation in American history. In the 60s, more than half of all adult males were regular smokers—and an additional 21% had only very recently given up the habit.

Then the generation watched well-loved smokers from their youth—notables like Johnny Carson, Humphrey Bogart, and John Wayne— suffer through extended illnesses (Carson to emphysema, Bogart to esophageal cancer, and Wayne to cancer and heart disease) that scientific breakthroughs have since proven were related to their smoking habits.

And some things have changed since the 1960s.

Senior healthcare specialists  have recorded a drop in the number of smokers in the situation. In the 21st century, only about 9% of adults 65 and over are regular smokers, but even older adults who have quit smoking can be at risk for smoking-related illness.

And while the percentage of smokers has dropped with age, those who do smoke tend to be heavier smokers and are more likely to suffer from a chronic illness because they have smoked longer (an average of 40 years for those who began as young adults).

The American Lung Association has the facts on the older adult habit:

Unfortunately, despite these very real statistics, older smokers are unlikely to change their habits without intervention from family and senior healthcare providers as they are far less likely to believe that smoking harms their health than a younger smoker.

If you have a loved one who’s clinging to their old habit, now is the time to help them break the habit.

By
Bryan Reynolds
Bryan Reynolds is the Vice President of Marketing and Public Relations for Episcopal Retirement Services (ERS). Bryan is responsible for developing and implementing ERS' digital marketing strategy, and overseeing the website, social media outlets, audio and video content and online advertising. After originally attending The Ohio State University, he graduated from the College-Conservatory of Music at the University of Cincinnati, where he earned a Bachelor of fine arts focused on electronic media. Bryan loves to share his passion for technology by assisting older adults with their computer and mobile devices. He has taught several classes within ERS communities as well as at the Osher Lifelong Learning Institute run by the University of Cincinnati. He also participates on the Technology Team at ERS to help provide direction. Bryan and his wife Krista currently reside in Lebanon, Ohio with their 5 children.
senior healthcare senior living health tips for seniors

See What Senior Living in Hyde Park is All About