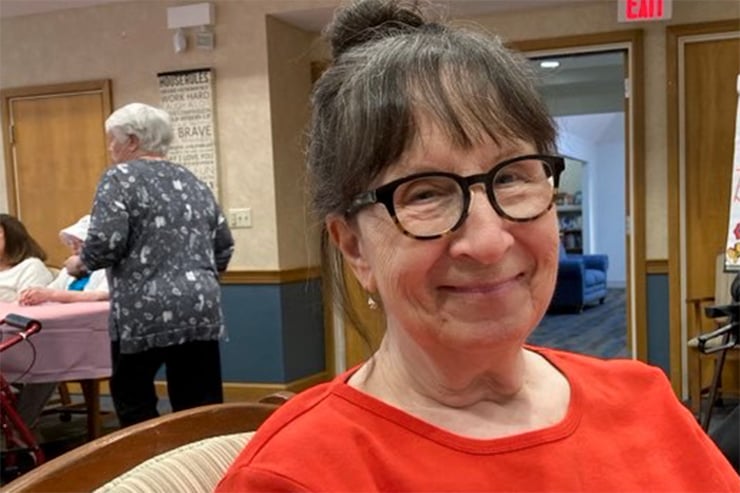 Kris Wilkinson, 74, calls it “a God thing” that she became friends with Leona Dockham, who celebrated her 107th birthday in March.

“One of the things I was praying about before I moved here was, ‘Where do you want me to serve?’” Wilkinson said. “So, this seemed to be one of the answers.” 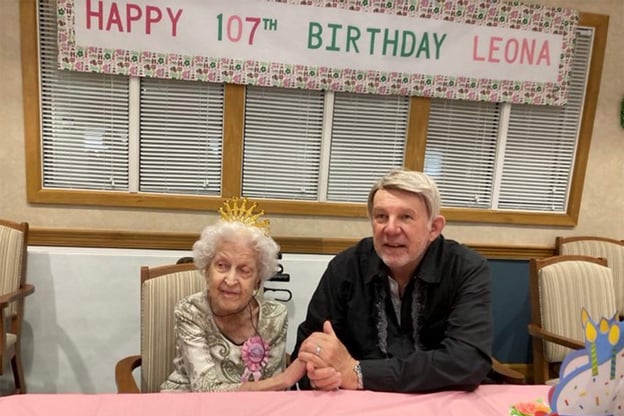 Leona Dockham and her nephew, Tim Stuart, celebrated her 107th birthday at Canterbury Court in West Carrollton, an Affordable Living by ERS community where she lives.

Dockham was born in 1915 when the first World War was raging in Europe. She was a “Rosie Riveter” during World War II, one of the legions of American women who worked in factories assembling things needed for the war. She helped with the manufacturing of military landing craft in Pontiac, Mich.

Dockham, who cared for her father and married when she was 40, didn’t have children. She has only one living relative, her nephew, Tim Stuart, of Miami Township, who cares for her with his wife, Sherry.

She moved to Canterbury Court to take care of her younger sister, Madelyn, who died in late 2017. When Madelyn Stuart was considering moving in, she told Jan Velkoff, community manager at Canterbury Court, “I want my sister to come with me.”

“I said ‘OK,’ and we worked it out,” because Dockham’s income qualified her to live in the Affordable Living senior community, Velkoff said.

When people were physically distancing during the COVID-19 pandemic, “She would walk up and down the hall, so we stopped and talked one day, and took it from there,” Wilkinson said.

“She needed friends, so I feel like God put us together,” Wilkinson said, choking up with love for her friend, whom she said is very witty. “She’s very dear.”

Dockham, at her party, said she has lived an ordinary life. She described herself as a lifelong homebody who “always tried to be as good as I could be.”

She laughed when asked if she always had succeeded. 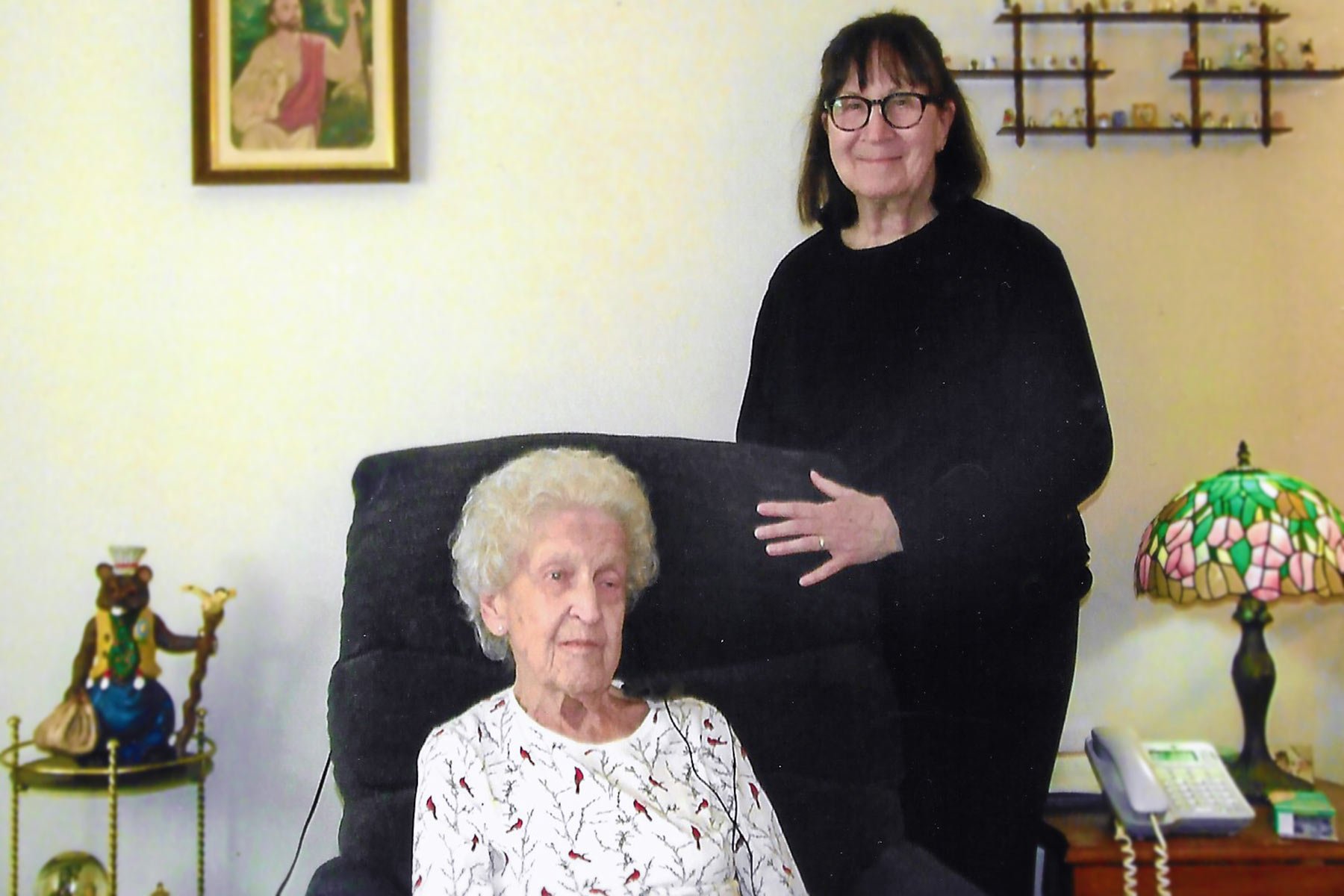 Dockham’s father worked for a railroad and wore big overalls for his job. They had a cat, which would climb up the inside of his overall leg “and come out the top of the bib,” Wilkinson said.

“She would like to go home and be with Jesus,” Wilkinson said. “But she’s got a good sense of humor. I think it’s been hard to be, except for Tim, the last one.”

Dockham lives with macular degeneration that affects her eyesight and has hearing difficulties. Stewart recently bought her a device that sits on a table and amplifies sounds through earphones, allowing her to hear some things.

“I come down usually in the afternoons; Tim comes at lunch and gives her ‘her dinner,’ that’s what she calls it, and I usually stop in around three and make sure she gets soup in a bowl and toast her a biscuit, and visit with her for a bit.”

“Just recently, she’s started to come down and have her hair done,” Wilkinson said. Her birthday was the second time she did that, “because she used to do pin-curls, and she can’t do them anymore.”

Dockham received an angel figurine that plays the song, “(Our Love will Go on) Till the End of Time.”

One amenity ERS Affordable Living communities have that many other senior housing communities lack is a community room, which helps residents build friendships. For a while, it was closed because of the pandemic: “I think everybody is relieved to be able to get together,” Wilkinson said.

Cecilia Gibson, 67, another resident, said about Leona: “I love her. She’s always been pleasant, always been kind. Always positive. She loves physical touch.”

“We have a lot of good people who live here. We enjoy that,” said Velkoff, who has worked there for almost nine years.

Velkoff noted that one former resident, Hilda Henderson, who celebrated her 100th birthday in 2020, recalled growing up in the east end of Dayton and watching the Wright Brothers testing a small airplane near her home.

For Henderson’s birthday, police and firefighters drove by the community, honking their horns and flashing their lights in celebration. Ms. Henderson passed away in 2021.

Give online today if you would like to donate to support the older adults who live in our thirty Affordable Living by ERS communities. You can also register to volunteer here.

It’s never too late to enhance your aging — it always helps to have friends around you for support. Read our Positive Aging Guide for tips about staying active, connected, and engaged.

By
Kristin Davenport
Kristin Davenport is the Director of Communications for Episcopal Retirement Services (ERS). Kristin leads ERS’s efforts to share stories that delight and inspire through social media, online content, annual reports, magazines, newsletters, public relations, and events. Kristin earned her BFA in graphic design from Wittenberg University. She joined ERS in 2014 after a 25-year career as a visual journalist and creative director with American City Business Journals. Her role at ERS has ignited her passion for making Cincinnati a dementia-inclusive city, and she spends time with residents as a SAIDO® Learning lead supporter. Kristin is the executive producer and co-host of the Linkage Podcast for ERS. Kristin and her husband Alex live in Lebanon, Ohio, with their two daughters. She also serves as a Trustee and the President of the Lebanon Food Pantry and is a board member for ArtScape Lebanon, where she teaches painting and has an art studio, Indium Art.
senior housing aging in place senior apartments tips for seniors

7 Career Tips for Reach High as You Can Day