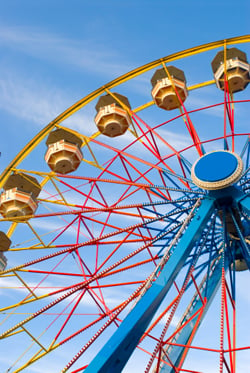 When looking for things to do with the grandkids or a group of friends, seniors often shy away from amusement parks. The thought of rough roller coasters, dizzying spin rides and high admission prices doesn't appeal to many. But not all amusement parks are built alike. And in Cincinnati, there may be one that’s just your speed — Coney Island.

Wait, I thought Coney Island was in New York?

Well, yes. The original is. And the amusement park along the banks of the Ohio River, just east of downtown, is named for it.

When it opened in 1886, the park was originally called Ohio Grove and was billed as "The Coney Island of the West." The nickname stuck and was shortened to “Coney Island” over the years.

In the early years, the Island Queen riverboat, the Island Queen served as the main mode of transportation from downtown's Public Landing out to the park. But after 36 years of service, from 1896 to 1922, a fire damaged it beyond repair.

A second Island Queen, featuring a wide promenade, was built in 1927. Many young lovers took their first strolls along its decks before landing at Coney Island and twirling the night away in its Moonlight Gardens dance hall. The second riverboat also met an unfortunate end.

In September 1947, while cruising to Pittsburgh for off-season maintenance, a carelessly lit cigarette ignited an oil tank onboard. The Island Queen exploded and burned to the waterline.

After that incident, and due to its flood-prone location along the river, the park entered a period of decline. In 1968, the Taft Broadcasting Corporation purchased it and announced plans to build a new amusement park, Kings Island, on higher ground north of the city. Most of the rides, including the log flume and the Shooting Star roller coaster (which, now called The Racer, still operates today in its new home), were moved to the new park, and Coney Island closed in 1971.

But you can't keep a good thing down.

When Taft was unable to sell Coney Island's land for what they felt would be a fair price, they reopened its Sunlite Pool. And since that reopening in 1972, Coney has become known as a laid back sister park to Kings Island.

For starters, the aforementioned Sunlite Pool — built in 1925 — is to this day the largest, flat surface recirculating pool in the world. With over an acre of shallow water, it’s a perfect cool-off spot on a day out with the family. Then there are the four waterslides of various levels of thrills and a deep end with lap lanes for active seniors who want to get some exercise.

The extensive picnic grove hosts many a lunchtime or weekend gathering. There is an 18-hole miniature golf course, an arcade with classic skill games, video games and skee-ball, and even a pint-sized Old West play town.

Many of the rides have also been reopened! The Dodgem bumper cars will have you giggling along with the kids. There are paddle boats and canoes to take a leisurely float on the park's Lake Como, a Ferris wheel, a giant slide and even a small roller coaster called The Python.

Children of all ages will love Coney Island. The kiddie ride area includes circle-track airplane, boat and train rides, the Frog Hopper, helicopters and a small swing. And don't forget to take a spin on the Grand Carousel to relive the magic of youthful summers.

Moonlight Gardens remains open with live shows that are sure to please the whole family. And if those aren't enough, Riverbend Music Center is just next door on a parcel that was formerly occupied by the Shooting Star— so you can time your day trip to precede a Cincinnati Pops concert!

Coney Island is open from 11 am until 8 pm Sundays and weekdays (9 pm on Fridays and Saturdays) through the middle of August. Sunlite Pool opens at 10 am.

If you're looking for a little fun with the family, or with a group of friends, Coney Island is just the right speed to fit your senior lifestyle. Get out to the park, take a dip in Sunlite Pool and put some splash into your retirement.

By
Bryan Reynolds
Bryan Reynolds is the Vice President of Marketing and Public Relations for Episcopal Retirement Services (ERS). Bryan is responsible for developing and implementing ERS' digital marketing strategy, and overseeing the website, social media outlets, audio and video content and online advertising. After originally attending The Ohio State University, he graduated from the College-Conservatory of Music at the University of Cincinnati, where he earned a Bachelor of fine arts focused on electronic media. Bryan loves to share his passion for technology by assisting older adults with their computer and mobile devices. He has taught several classes within ERS communities as well as at the Osher Lifelong Learning Institute run by the University of Cincinnati. He also participates on the Technology Team at ERS to help provide direction. Bryan and his wife Krista currently reside in Lebanon, Ohio with their 5 children.
senior lifestyles retirement community senior living Cincinnati

Senior Life Can Be a Beach for Older Travelers

What to Do with Assets before Moving into Assisted Living