Not Worried About Losing Sleep? You Should Be. 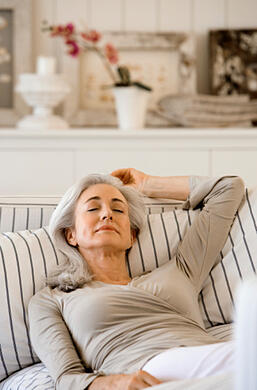 Senior healthcare experts have long known that dementia and Alzheimer’s patients do not sleep well. The question to date has been whether or not sleeplessness causes cognitive dysfunction, or vice versa.

Now, we may be a step closer to that answer.

Two studies published in October of this year are lending support to the belief that lack of sleep can worsen dementia.

Sleep may help your brain to “take out the trash.”

In a study published in Science, University of Rochester researchers found that the brains of sleeping mice were better able to remove cellular waste products like beta amyloid — the protein that accumulates into the brain “plaques” associated with Alzheimer’s disease.

Scientists reported that the glymphatic systems – the brain’s specialized waste removal system — were more active in sleeping mice than in alert mice, suggesting that the brain may actually need sleep to flush out accumulating debris.

Dr. Maiken Nedergaard, the study’s lead researcher, used the example of the brain as hosting a party: “You can either entertain the guests or clean up the house, but you can't really do both at the same time.”

The brain, he explained, requires a tremendous amount of energy to think, or to move cerebrospinal fluid through the glymphatic system. At night, when the need to process information is reduced, energy is freed up to move fluid through the brain and clean out the protein waste that has accumulated throughout the day.

This may have significant implications for researchers as they search for methods to prevent Alzheimer’s and dementia disorders.

A separate, unrelated study published in JAMA Neurology, further clarified the link between sleep and amyloid protein buildup in the brain. Researchers at Johns Hopkins found that the brains of people who sleep less do indeed contain more amyloid protein plaque, dovetailing with the University of Rochester’s findings.

Though the Johns Hopkins study did not establish a specific causality (they were unable to determine if the lack of sleep led to increased amyloid plaque, or if the buildup of amyloid plaque was causing patients’ insomnia), the evidence is intriguing. They were not able to rule out sleeplessness as a contributing cause of dementia.

Though studies have yet to show direct cause and effect relationship between sleeplessness and dementia in human beings, the evidence is clear that they do occur together. Getting more sleep certainly can’t hurt your chances of avoiding Alzheimer’s — it may even improve them.

If you’re having trouble getting a good night’s rest, you might try the following strategies:

1. Maintain a regular sleep schedule.
Most of us know that we need 7-9 hours of uninterrupted daily sleep for good health. But it also matters when you sleep. If you are maintaining a varied work schedule and trying to sleep at different times of the day, you are hindering your body’s natural Circadian rhythm. Make sure you schedule a regular time to get your rest.

2. Lose weight.
Obesity is the primary cause of sleep apnea (which occurs when a person briefly stops breathing while asleep). Sleep apnea sufferers may wake or partially wake many times during the night, interrupting the brain’s normal sleep functions. It has also been definitively linked to increased risks of high blood pressure, heart disease and stroke, as well as chronic fatigue.

3. If you smoke, stop now.
Nicotine is a stimulant; using it can keep you awake. Additionally, smoking causes long-term lung damage, which can contribute to sleep apnea.

4. Drink more water and fewer caffeinated or sugary drinks.
Ingesting caffeine and sugar both raise your blood glucose level, which makes you jittery and anxious.  Water has the opposite effect.

5. Regulate the temperature.
The ideal sleeping temperature is between 65 and 75 degrees Fahrenheit. Keeping your bedroom temperature in this range induces the production of melatonin, a neurotransmitter that causes you to relax.

6. Review your medications.
If you are taking one or more medications, make sure you have a primary care doctor who can watch for potentially negative drug interactions. Some medication reactions can make you anxious and keep you from getting a good night’s rest.

If your loved one is a senior living with dementia or Alzheimer’s and has difficulty sleeping, talk with a geriatric care manager or senior healthcare specialist about available treatments for improving his or her ability to rest through the night. Increasing nightly sleep may help to slow the advance of the cognitive disorder.

By
Bryan Reynolds
Bryan Reynolds is the Vice President of Marketing and Public Relations for Episcopal Retirement Services (ERS). Bryan is responsible for developing and implementing ERS' digital marketing strategy, and overseeing the website, social media outlets, audio and video content and online advertising. After originally attending The Ohio State University, he graduated from the College-Conservatory of Music at the University of Cincinnati, where he earned a Bachelor of fine arts focused on electronic media. Bryan loves to share his passion for technology by assisting older adults with their computer and mobile devices. He has taught several classes within ERS communities as well as at the Osher Lifelong Learning Institute run by the University of Cincinnati. He also participates on the Technology Team at ERS to help provide direction. Bryan and his wife Krista currently reside in Lebanon, Ohio with their 5 children.
alzheimer's and dementia health tips for seniors brain fitness

Is the US Unprepared to Provide Eldercare for Seniors with Dementia?