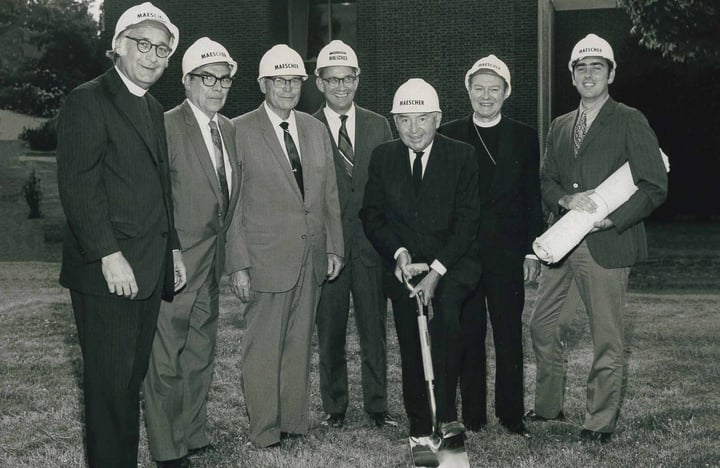 Pictured: Wilford Romney and others at the Marjorie P. Lee groundbreaking ceremony.

Last year, the Marjorie P. Lee Retirement Community hit a significant milestone — we unveiled three new long-term care households as part of our $20 million, three-year Master Plan. One such household was the Romney House, which offers access to the highest standards of eldercare and large, elegant apartments and concierge services. Romney House subverts seniors’ expectations of what a nursing home looks and feels like.

A History of the Romney House’s Namesake

The year was 1951. A group home in Cincinnati where elderly women in the later years of their lives were cared for was about to close, leaving the fate of the 20 ladies who lived there uncertain.

Eleanor Holmes, a social worker and devout Episcopalian learned of the story and pleaded with Bishop Henry Hobson of the Episcopal Diocese of Southern Ohio to intervene. He established the Bishop Theodore Irving Reese Home in Clifton and the Memorial Homes Foundation to oversee it.

Among those Bishop Hobson tapped to serve on the foundation board was lifelong Episcopalian, Procter and Gamble executive, and tireless volunteer Bill Romney. So began a connection between the Romney family and Episcopal Retirement Services that has lasted seven decades and is still growing.

Bill Romney's three daughters — Mary Ellen Baude, Nicky Bade, and Emily Romney — and other family members, along with leaders of ERS, recently dedicated a wing of the Marjorie P. Lee Retirement Community in Cincinnati as the Romney House. This wing honors Bill and his wife Mary “Marnie” Elizabeth Romney's decades of commitment and leadership in the service of ensuring that older adults can enjoy full and meaningful lives in their later years. 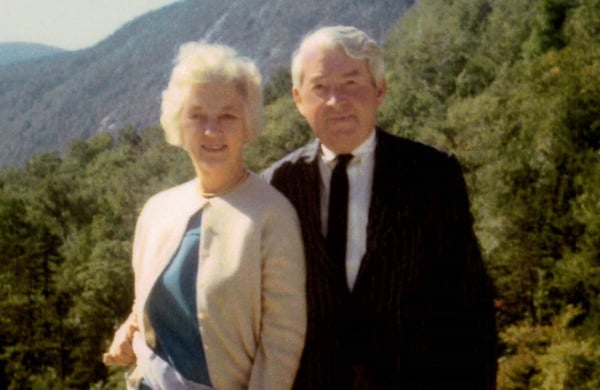 Romney House includes renovated studio and one-bedroom apartments that promise a catered lifestyle in a long-term nursing care setting and feature high ceilings, large windows, and plenty of space for family and friends to visit. Personalized experiences, small group activities, special events, wellness coaching, and concierge services are available at Romney House to keep its residents stimulated and engaged as they age.

It's fitting that this elegant, person-centered care household is named after Bill Romney. He traveled the country in the '50s and '60s, searching for best practices at retirement communities that he then brought back to Cincinnati to use as he and others led the work to create a loving community and quality services for the elderly.

Bill Romney was a friend and colleague of Charles Lee and his wife, Marjorie P. Lee, for whom our Cincinnati-based retirement community is named. Stricken with cancer in the late 1950s, Marjorie Lee's dying wish was for her husband to build a home for the elderly women that she had cared for as a founding trustee of the Bishop Reese Home.

For help in carrying out his wife’s plan, Charles Lee turned to Bill Romney, who served as a liaison between Lee and the Episcopal diocese and who scoured the country looking for ideas to incorporate into their vision of a caring retirement community.

“They needed an idea of what they would want and where it would be,” says Romney’s daughter, Mary Ellen Baude of Cincinnati. “They were quite successful in working together.”

In 1963, the Marjorie P. Lee Home, largely incorporating the vision of Charles Lee and Bill Romney, opened its doors. The Romney daughters’ maternal grandmother, Ida May Voige, was one of the original residents and lived there for ten years.

A few years later, the home expanded with an independent living building, again with Bill Romney’s active participation. A few years after that, the Marjorie P. Lee Home grew again, this time with the Care Center’s addition, which now features our Amstein House that serves long-term care with cognitive loss and Berghammer House, which serves long-term care residents with physical challenges.  Again with Bill Romney’s help.

Episcopal Retirement Services was pleased to name a newly created household at Marjorie P. Lee in honor of Wilford L. and Mary Elizabeth Romney through the gift of their daughters Emily Romney, Mary Ellen Baude, and Nicky Bade.

Bill’s younger sister, Bernice Romney, lived at Marjorie P. Lee for several years and was cared for there until her death.

“My sisters and I often feel it was fate that he had given all these years to providing quality care for the elderly as a volunteer, and now he saw what it was like firsthand to receive some of that quality care,” says his daughter Nicky Bade of Cincinnati.

Marnie Romney moved into an apartment there to be under the same roof, and she ultimately moved to the Care Center before she passed away in 1993.

Billy and Marnie’s three daughters have continued the family legacy of service to promote compassionate, quality care for the elderly. 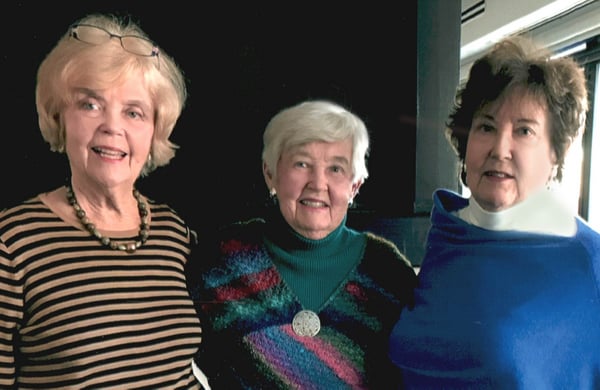 Mary Ellen began volunteering at Marjorie P. Lee in 1988 and had been lending a hand there ever since.

Nicky began volunteering in the mid-80s, first on the Marjorie P. Lee Advisory Board, a group of volunteers and residents who serve as liaisons to the corporate office, then helping to establish an auxiliary group at the home, which she led for four years. And for years, she has run the Corner Store, the community’s in-house shop for cards, gifts, snacks, and sundries.

Emily pursued a career with her family in Boston and, along with her sisters, provided the generous donation that resulted in the dedication of the Romney House.

Adding Bill and Marnie’s surname to the long-term care household will be a reminder of their integral roles in shaping not only the Marjorie P. Lee Retirement Community but in advancing the quality of care for the elderly overall.

“We wanted people to know something about the early days and something about one of the people who gave a lot of energy and time to making this new industry work as well as it did,” says Nicky.

“We really wanted to do this together,” says Emily, “in gratitude to our family for having made this contribution to life in Cincinnati. It’s a very good feeling.”

Learn More About the Romney House

Do you have questions about the Romney House or Marjorie P. Lee’s other long-term care households? We invite you to fill out an information request form or visit our website. You can also click here to take a virtual tour and see our premier retirement community for yourself or click the button below to download a free long-term care guide.

By
Kristin Davenport
Kristin Davenport is the Director of Communications for Episcopal Retirement Services (ERS). Kristin leads ERS’s efforts to share stories that delight and inspire through social media, online content, annual reports, magazines, newsletters, public relations, and events. Kristin earned her BFA in graphic design from Wittenberg University. She joined ERS in 2014 after a 25-year career as a visual journalist and creative director with American City Business Journals. Her role at ERS has ignited her passion for making Cincinnati a dementia-inclusive city, and she spends time with residents as a SAIDO® Learning lead supporter. Kristin is the executive producer and co-host of the Linkage Podcast for ERS. Kristin and her husband Alex live in Lebanon, Ohio, with their two daughters. She also serves as a Trustee and the President of the Lebanon Food Pantry and is a board member for ArtScape Lebanon, where she teaches painting and has an art studio, Indium Art.
Planning Ahead skilled nursing care Marjorie P. Lee master plan long-term care Romney House

How to Talk to a Loved One About Memory Loss