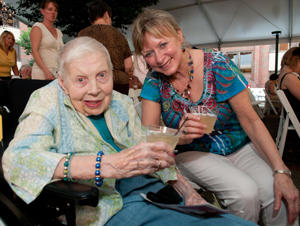 We’ve said before that retirement living isn’t just for older adults who are looking for a place to enjoy their golden years in solitude, and our residents prove the rule.

Here’s a look at some highlights from our action-packed social calendar this month.

We had the chance to hear some of our old favorites by Frank Sinatra, Perry Como, Dinah Shore and Nat King Cole this evening with a special performance by the Blue Chip Duo in the Event Center.

Resident students of our regular technology class “Downloading with Dan and Debbie” gathered in the Lending Library to take a look at Facebook which included a segment on the Marjorie P Lee, Deupree House and ERH Facebook pages by special guest Bryan Reynolds.

Resident ticket holders will be able to take the shuttle to the World Premiere of the Cincinnati Ballet's biggest full-length ballet adventure in decades. King Arthur’s Camelot is the highlight of the Ballet’s 50th season anniversary— complete with magic, projections, puppets, jousting and all things Camelot.

February 22 is National Sword Swallowing day, and to mark this extraordinary occasion, Marjorie P. Lee will host a variety show by the Pickled Brothers Circus in the Event Center. Residents will be mystified and astounded by the spectacle of sword swallowing, fire eating, and much more.

If you’ve ever wondered about the industries that made Cincinnati boom, “Bricks, Barrel Vaults and Beer: The Architectural Legacy of Cincinnati Breweries” at the Betts House is definitely for you.

This special exhibit is the first to investigate the cultural currents and social influences that helped make Cincinnati a leader in the nineteenth century brewing industry. The tour explores the immigrant brewers who made a name for themselves in the nascent industry, charting the history of the tunnels, breweries, buildings, and individuals that were essential in making Cincinnati an American brewing destination.

Resident ticket holders will be able to take the shuttle to the Cincinnati Symphony performance this evening where CSO Music Director Laureate Paavo Järvi will introduce a dazzling young pianist, Zhang Zuo, whose playing has been described as “full of enthusiasm and glamour, radiating the vigor of youth.”

Marjorie P. Lee will be off to the Anderson Center to see the Beechmont Players performance of Into the Woods, a musical extravaganza that follows the well-known characters Cinderella, Rapunzel, Jack (and the giant!) and Little Red Riding Hood to discover “the rest of the story” and see if these fairy tale favorites really did live happily ever after.

Marjorie P. Lee will be headed to historic Over-the-Rhine to enjoying dinner in the cozy confines of the newly established Anchor, near Music Hall. Chef and owner Derek dos Anjos brings the beach to landlocked Cincinnati, flying in only the freshest, high quality American seafood from both the west and east coast and serving up beach food classics.

And we’re told that Derek do Anjos’ team has the perfect wine list to compliment every seafood selection.

Marjorie P. Lee will be heading to the Cincinnati Museum Center to see the final stop of the renown “Diana: A Celebration” exhibition. Direct from the Althorp Estate in England, the ancestral home of the Spencer family, comes more than 150 personal objects celebrating the life and work of Diana, Princess of Wales.

By
Bryan Reynolds
Bryan Reynolds is the Vice President of Marketing and Public Relations for Episcopal Retirement Services (ERS). Bryan is responsible for developing and implementing ERS' digital marketing strategy, and overseeing the website, social media outlets, audio and video content and online advertising. After originally attending The Ohio State University, he graduated from the College-Conservatory of Music at the University of Cincinnati, where he earned a Bachelor of fine arts focused on electronic media. Bryan loves to share his passion for technology by assisting older adults with their computer and mobile devices. He has taught several classes within ERS communities as well as at the Osher Lifelong Learning Institute run by the University of Cincinnati. He also participates on the Technology Team at ERS to help provide direction. Bryan and his wife Krista currently reside in Lebanon, Ohio with their 5 children.
activities for seniors social engagement Senior Life senior living