Next month is American Diabetes Month, and in honor of the observance, we wanted to share a few facts to help you get a picture of how the disease is affecting the health of Americans—especially when it comes to senior healthcare. 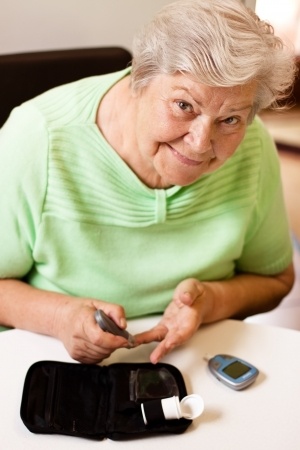 Diabetes in the General Population

In 2011, the CDC estimates that Americans paid about $176 billion for medical expenses directly related to the treatment and health complications of diabetes—more than 2 times higher than what expenditures would be in the absence of diabetes.

Expenses that will only continue to grow as the number of Americans with diabetes continues to rise:

Nearly 27% of all seniors in the United States have diabetes which is the highest percentage of any age group in America.

According to the most recent surveys by the CDC:

The Truth about Diabetes

The American Diabetes Association has a record of some of the most common myths about how diabetes develops and how your life will change after diabetes because sometimes the facts aren’t so clear.

Here’s the real scoop on the top 5 myths about diabetes:

1. Though many people believe diabetes isn’t a serious disease, it can be deadly.

Proper management techniques can help you prevent or delay any complications from the disease, but, diabetes causes more deaths a year than breast cancer and AIDS combined. Two out of three people with diabetes die from heart disease or stroke.

2. Being overweight or obese doesn’t mean you will automatically develop type 2 diabetes.

Your weight can be a risk factor, but there are plenty of other factors—like family history, ethnicity and age—that can also contribute to diabetes. These days, many people tend to look at obesity, to the exclusion of all other factors which can be as dangerous as not taking weight into account at all.

3. Eating too much sugar won’t give you diabetes.

At least, not by itself.

However, senior healthcare experts at the American Diabetes Association still recommend that older adults limit their intake of sugar-sweetened foods and beverages to limit their risk of developing diabetes.

4. People with diabetes don’t have to limit their diet to special diabetic foods.

Although diabetics may need to be particularly careful of overindulging in certain foods like sweets or alcohol, the same low-fat, whole grain diet—sparing in carbohydrates, added sugars, fats, and processed foods—that’s healthiest for the average senior is healthy for a senior with diabetes as well.

According to the American Diabetic Association, “Diabetic and ‘dietetic’ foods generally offer no special benefit.”

5. Having to use insulin is not necessarily a sign that you aren’t treating the condition well on your own.

When first diagnosed, many people with type 2 diabetes can keep their blood glucose at a healthy level without insulin. But type 2 diabetes is progressive, and, over time, the body begins to slowly decrease its production of insulin. When production drops to a certain level, healthy habits and oral medications may not be enough to keep blood glucose levels normal, and insulin is needed to keep those levels where they should be.

By
Bryan Reynolds
Bryan Reynolds is the Vice President of Marketing and Public Relations for Episcopal Retirement Services (ERS). Bryan is responsible for developing and implementing ERS' digital marketing strategy, and overseeing the website, social media outlets, audio and video content and online advertising. After originally attending The Ohio State University, he graduated from the College-Conservatory of Music at the University of Cincinnati, where he earned a Bachelor of fine arts focused on electronic media. Bryan loves to share his passion for technology by assisting older adults with their computer and mobile devices. He has taught several classes within ERS communities as well as at the Osher Lifelong Learning Institute run by the University of Cincinnati. He also participates on the Technology Team at ERS to help provide direction. Bryan and his wife Krista currently reside in Lebanon, Ohio with their 5 children.
healthy eating Senior Life senior healthcare senior living health tips for seniors diabetes