Senior Life in Cincinnati Isn’t About Planting Yourself at Home

Senior Life in Cincinnati Isn’t About Planting Yourself at Home 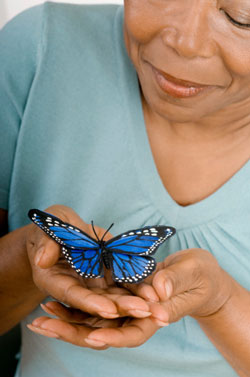 Sometimes, one needs to get out and see something beautiful to remind him or her that there is more to life than waking, eating and sleeping. Two such sights are the Krohn Conservatory, in Cincinnati’s Eden Park, and its annual Butterfly Show.

An indoor rainforest in the Midwest?

The Krohn Conservatory, high atop Mt. Adams, overlooking downtown’s east side, is a gem.

Built in 1933 to replace earlier, smaller structures in Eden Park, the Art Deco conservatory was originally known just as the Eden Park Greenhouse. In 1937, the conservatory was renamed to honor longtime Cincinnati parks commissioner Irwin K. Krohn, who served from 1912-1948.

In 1966, the conservatory was damaged by a severe hailstorm, but was restored shortly thereafter, the original wooden superstructure replaced with aluminum.

Today, the Krohn Conservatory hosts over 3,500 species of exotic and rare plants. Over 300,000 people per year, including Eden Park day-strollers, botanists, horticulturalists and garden hobbyists, visit it. It is a popular stop for Tristate schoolchildren, too— virtually every kid who grew up in the area has wandered among its plants on a field trip before bussing up the hill to have a brown bag luncheon on the park’s overlook.

“The Earth laughs in flowers.”

If Ralph Waldo Emerson’s missive is true, Krohn is positively a-titter. The facility hosts six annual floral shows, and the conservatory’s orchid collection features 75 or more blooms at any given time. In addition to these tropical beauties, an assortment of other colorful blooms can be found in the greenhouse, and seasonal flowers brighten the landscape on its grounds.

For Cincinnati seniors who crave a taste of the tropics, hundreds of ferns, a vanilla vine, pomegranate, cacao and even a dwarf banana tree can be found within the walls of the conservatory. Its four-and-a-half-story central Palm House has a sublime 20-foot waterfall with a meandering, gurgling goldfish stream, plus rubber trees and palm trees that will make you feel as if you’ve stepped away from the banks of the Ohio and straight into the Amazon.

Bonsai enthusiasts and zen practitioners come to experience a large collection of bonsai, many of which have been donated to the conservatory by private individuals and members of the Bonsai Society of Greater Cincinnati.

There’s even a desert section that features agave, yuccas, aloe cacti and various succulents, sure to warm your heart in the winter months (assuming, of course, you don’t snowbird it to Arizona to see such things for yourself).

Krohn Conservatory sits within the Eden Park grounds and is administered by the Cincinnati Parks and Rec Department. It is open Tuesday-Sunday 10 AM-5 PM most weeks, but stays open later during its acclaimed Butterfly Show.

Speaking of the butterflies…

Every year, Krohn plays host to a spectacular butterfly show. Thousands of colorful, exotic, free-flying butterflies flit about the greenhouse among the flowers and trees. If you’re lucky, one or two may land on you! Many themed special programs and events— for children and for general audiences— are produced during the butterfly show.

Each year’s show features butterflies from a different geographic region, so it’s something you’ll want to see year after year. The 2014 exhibition is called Pura Vida: Butterflies of Costa Rica; it opened in mid-April and runs through June 22. Admission for seniors is just $6; children over 4 years old are $4 and children under 4 are free, so the butterfly show can make for an affordable, magical afternoon out with the grandkids.

The Krohn Conservatory sits up the hill from Eden Park’s Mirror Lake and just downhill from the scenic bluff overlook and picnic areas, so plan ahead, pack a lunch and prepare for a gorgeous day of easy retirement living.

Afterward, be sure to stop over at the nearby Cincinnati Art Museum or take in a show at Playhouse in the Park, which sits at the park’s crest.

If you’re still going after a day of quiet reflection, and in the mood for nightlife, head over to Mt. Adams Village. Grab dinner at Teak Thai Cuisine & Bar or the Mt. Adams Bar & Grill, then have a nightcap and take in some live music at the Blind Lemon.

By
Bryan Reynolds
Bryan Reynolds is the Vice President of Marketing and Public Relations for Episcopal Retirement Services (ERS). Bryan is responsible for developing and implementing ERS' digital marketing strategy, and overseeing the website, social media outlets, audio and video content and online advertising. After originally attending The Ohio State University, he graduated from the College-Conservatory of Music at the University of Cincinnati, where he earned a Bachelor of fine arts focused on electronic media. Bryan loves to share his passion for technology by assisting older adults with their computer and mobile devices. He has taught several classes within ERS communities as well as at the Osher Lifelong Learning Institute run by the University of Cincinnati. He also participates on the Technology Team at ERS to help provide direction. Bryan and his wife Krista currently reside in Lebanon, Ohio with their 5 children.
activities for seniors senior lifestyles arts and culture Senior Life senior living Cincinnati

Moving into a Retirement Community? Here’s What You Should Keep.