Cincinnati’s Seniors Get in on the Game Day Fun

Cincinnati’s Seniors Get in on the Game Day Fun 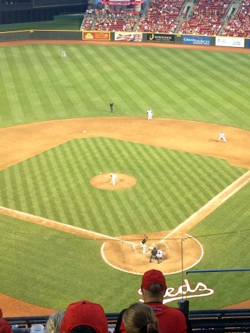 If there’s one thing that most Cincinnatians share, it’s a love of baseball and our hometown Cincinnati Reds. Famed as the city that hosted the first professional baseball franchise — the 1869 Cincinnati Redstockings — Cincinnati has a long tradition of near-rabid fandom for the boys of summer. Often, the game serves as a generational link, as older family members share their love for it with their youngsters.

The Reds recognize this and have gone to great lengths to welcome seniors and their family members to Great American Ballpark, with senior-friendly events and pricing.  Here are some of the benefits older persons can expect downtown when they go to enjoy our national pastime.

Take the Grandkids Down to the Reds Hall of Fame and Museum!

The Reds are one of the few teams in Major League Baseball to sponsor and operate their own permanently housed Hall of Fame and museum. Loosely affiliated with the National Baseball Hall of Fame and Museum in Cooperstown, NY, the Reds Hall of Fame is open all week from 10 am until 5 pm on non-game days. When the Reds are in town, the Hall of Fame stays open for two hours following the conclusion of afternoon games, or until 8 pm when there is a night game scheduled.

The Reds Hall of Fame and Museum features two floors of exhibits, with memorabilia and artifacts from seasons past, interactive games, three World Championship trophies (1975, 1976 and 1990 — trophies were not awarded to World Series winners until the 1960s) and bronze plaques of the inducted members of the Reds Hall of Fame.

For visitors 60 and older, a Senior Pass admission is only $8 and only $6 for military veterans with valid ID. Grandparents will be happy to learn that school-age children are also admitted for $8, while those 4 and younger get in for free. Group pricing can also be arranged with the Hall for 15 or more guests — a senior group admission is only $6 per person. One can call (513) 765-7923 to speak with a sales representative and arrange for a group discount.

But with a little planning, you might not have to pay at all! Throughout the season, the Hall will host Senior Days on certain Mondays, during which persons 60 and older are admitted for free.

Tour Behind the Scenes at Great American Ballpark

The Reds also host paid tours of the stadium on non-game days, or days preceding night games. The Scotts Ballpark Tour includes the press box, the dugout, a chance to step onto the warning track behind home plate, the Crosley Room, Diamond Club and admission to the Reds Hall of Fame and Museum.

The tour price for seniors or students is $15, with children under 4 admitted free, making it another great potential outing with the family. As with the museum, group discounts are available.

If you want to go see a ballgame, but worry that mobility issues would make it difficult or uncomfortable for you to climb the stairs to your seat, the Reds have your answer. Accessible seating on the concourses is available, with excellent views of the field. These seats are located near concessions and restrooms, and wheelchair assistance can be obtained if needed.

Amid rumors that the Reds would relocate out of Cincinnati in 1964, a group of boosters called the Rosie Reds was organized to stimulate interest in the team and serve the community. Originally a women’s-only group, membership in the Rosie Reds, the oldest continuously operating fan club of any Major League Baseball team, is now open to men and women of all ages, and traditionally many retirees participate.

Although enrollment is limited to 3,000 total members at any one time, the group is currently 2,600 strong and accepting applications. Organization dues support the Rosie Reds Scholarship Fund, member activities and various community service projects.

If you’re a senior living in Cincinnati, there’s nothing better than a trip down to the ballpark.

Summer time, warm breezes, hot dogs and nostalgia for the game — is there anything better? The Reds experience is one to be enjoyed, with other senior friends or with your family, and you’ll cherish the memories.