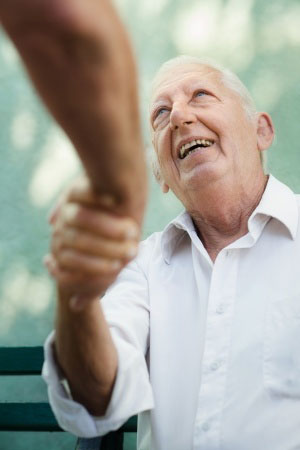 You may not have heard of it before, but September 8th is National Pardon Day— a day for forgiving people who you perceive have wronged you in the past. The tradition began as a tongue-in-cheek reaction to President Ford's issue of an official pardon, on September 8th, 1974, to Richard Nixon: organizers reportedly rationalized the day by saying, "if Dick Nixon can get a pardon, you can forgive anybody."

So what does being gracious have to do with senior living or senior health? Just this: forgiveness can bring many positive mental health benefits, though some forms of forgiveness can be more beneficial.

Choosing to look past a perceived slight, or what Virginia Commonwealth University professor of psychology Everett L. Worthington, Jr. calls "decisional forgiveness," means that a person decides to let go of negative feelings toward another. In essence, you decide to seek no revenge and move on.

From a practical standpoint, decisional forgiveness allows both parties to function going forward. But the wronged party sees few measurable mental health benefits in this scenario. You don’t stop being angry or feeling hurt, and those feelings gradually build up and have long-term impact on the psyche.

People often mull over and over on negative feelings— a process called rumination— ultimately souring their outlook on the future. It can fool you into thinking that things will never get better, that people around them have mal-intent, or even that life is hopeless.

This, says Worthington, creates a chronic stress response in the body— which has been linked with chronic physical pain, substance abuse and addiction, anxiety, depression and even personality disorders.

You have to accentuate the positive, eliminate the negative.

According to Worthington, who authored a book titled Forgiveness and Reconciliation: Theory and Applications, emotional forgiveness is, "where the health action is."

By allowing letting go of anger and placing yourself in the other person's shoes, you can gain a deeper understanding of the situation and release inevitable stress. And for many seniors, who may have accumulated a lifetime of stress, the benefits can be enormous. But emotional forgiveness is, of course, easier said than done.

To accomplish it, Worthington recommends taking five simple steps, which he calls:

This means that you remember the offense without allowing the emotions you felt to come into play. What were the circumstances in which the offense occurred? Was the person intentionally trying to hurt you? If so, why? Had you perhaps unintentionally slighted that person in the past? Were their actions the result of a simple oversight, or were they inadvertent? If you can understand the scenario under which the offense occurred, you will be better able to…

Empathize with the offending party.

Humans are fallible. We all make mistakes and do things we regret.

Maybe the person who hurt you had experienced a fair share of personal pain in the past. Maybe their anger or thoughtlessness had nothing specifically to do with you and was merely misdirected. Regardless, allowing yourself to step away from the moment of the offense and consider the other person's point of view may bring you peace.

Practicing altruism, another word for "selflessness," means that you place others' needs before your own. Now in a situation in which you have been emotionally or physically hurt, that can be quite a tall task. It takes quite a bit of empathy, and even more grace.

But by practicing altruism, you'll find that you'll feel better about you and about your relationship to the world around you. And you'll see rewards: altruistic behavior yields trust placed in you by others and it brings you peace of mind.

Commit to forgiving the offending party.

You make the decision to tolerate the other person's offending action. You decide that it is not worth holding a grudge. You experience the release of negativity. Then you…

Hold on to forgiveness.

Like a criminal record that has been expunged, you must consciously decide never to bring up the issue again—no small feat. After all, you won't forget it. And you cannot expect the offending party to be thankful for your forgiveness. But if you focus on how good it makes you feel, you'll see real benefits.

Graciousness is a virtue. And it's never too late to develop.

If you are a senior living with the weight of bad emotions and experiences, now is the time to turn things over and look to the future. By taking these simple steps to forgive someone, you'll feel better about yourself, about those around you and about life in general.

By
Bryan Reynolds
Bryan Reynolds is the Vice President of Marketing and Public Relations for Episcopal Retirement Services (ERS). Bryan is responsible for developing and implementing ERS' digital marketing strategy, and overseeing the website, social media outlets, audio and video content and online advertising. After originally attending The Ohio State University, he graduated from the College-Conservatory of Music at the University of Cincinnati, where he earned a Bachelor of fine arts focused on electronic media. Bryan loves to share his passion for technology by assisting older adults with their computer and mobile devices. He has taught several classes within ERS communities as well as at the Osher Lifelong Learning Institute run by the University of Cincinnati. He also participates on the Technology Team at ERS to help provide direction. Bryan and his wife Krista currently reside in Lebanon, Ohio with their 5 children.
senior lifestyles Senior Life senior living

Cincinnati Senior Living Kicks off Fall with a Flourish

Are Video Games the Next Great Brain-Training Tool?